A new tax on millionaires, a 22.5% gas tax hike  (bringing the total increase to 250% in 4 years), and now a tax on high frequency trades: it is becoming obvious to most – except perhaps the state’s democratic leadership – that New Jersey is now actively trying to drive out its tax-paying population and top businesses with a series of draconian measures to balance its deeply underwater budget, instead of slashing spending. The state-imposed limitations on commerce, mobility and socialization due to the covid pandemic have also not helped. And in case it is still unclear, the trend of New Jersey’s ultra wealthy residents fleeing for more hospitable tax domiciles which started with David Tepper years ago, is now spreading to members of the middle class.

According to the latest data from United Van Lines and compiled by Bloomberg, people have been flooding into Vermont, Idaho, Oregon and South Carolina, eager to flee such financially-challenged, high-tax, protest-swept, Democrat-controlled states as Connecticut, Illinois and New York. But no other state has seen a greater exodus than New Jersey, where out of every 10 moves, 7 have been households leaving the state, or nearly three times as many moved out than moved in. 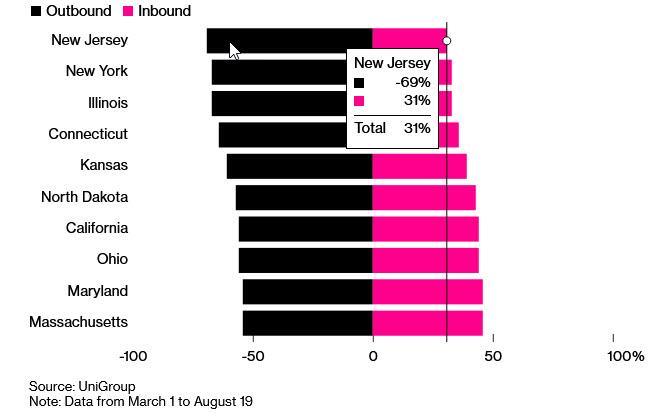 On the opposite end were bucolic, pastoral states such as Vermont and Idaho, which have seen between 70% and 75% of all inbound moves. 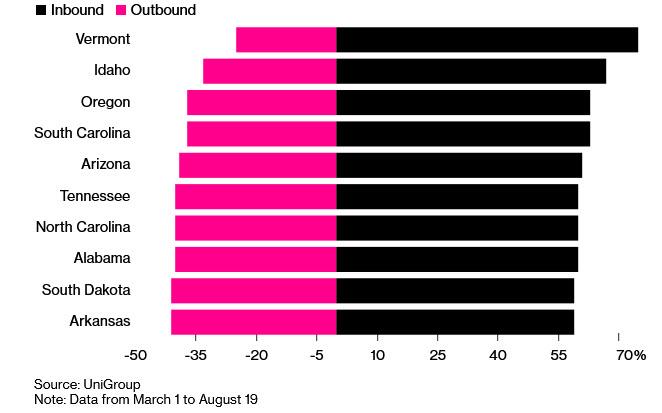 A hypothetical move from New York City to Vermont is priced at $773 compared to $236 for the reverse trip, according to a Bloomberg analysis of U-Haul pricing. This price differential is due to numerous variables, one being that more people are moving out of a city than into it

Those claiming this record exodus from the Tri-State area is purely a result of Covid, think again: as United Van Lines reported back in its latest Annual Movers Study held before the coronavirus pandemic struck, the exodus was already present, as New Jersey (68.5 percent), New York (63.1 percent) and Connecticut (63 percent) were all included among the top 10 outbound states for the fifth consecutive year. Primary reasons cited for leaving the Northeast back in January were retirement (26.85 percent) and new job/company transfer (40.12 percent). To that we can now add soaring taxes and stifling covid-linked mandates.

How long will this exodus persist is unclear: at some point the recipient states will realize they too have to follow with similar fiscal policies or else they too risk becoming the next New Jersey. However until then, one thing is clear: the more New Jersey and its tri-state peers seek to impose every possible form of tax on their rapidly diminishing residents, the fewer people will actually stick around to pay those taxes.

Authorities Have Always Prevented The Bright Future Of Humankind