Apple is set to begin initial 5G iPhone production in mid-September, with mass production expected by the end of the month or early October, according to the Nikkei Asian Review (NAR), citing two sources with knowledge of the matter.

The problem developing, according to the sources, is that Apple is behind “usual schedule over the past few years, when mass production began in August for lineups released in September, but it was a large improvement compared with the situation a few months ago.”

Factoring in the lost time, Apple could fall short of its iPhone production target this year. It ordered smartphone components for at least 80 million 5G iPhones, but sources said production levels could be around 73 to 74 million, with the rest of the units deferred into early 2021.

Sources said Apple would focus on the manufacturing of the cheaper 5G iPhone (6.1-inch OLED, two rear cameras), which accounts for 40% of total orders. The most expensive 5G handset is the 6.7-inch, triple-camera 5G iPhone.

Goldman Sachs analyst Rod Hall wrote the “iPhone is a very tough act to follow, with Services and Wearables not likely to be large enough to return the company to growth,” which doesn’t justify current valuations.

“In this report, we highlight both Microsoft and Amazon as examples of companies that are delivering the numbers and yet are valued at about the same multiple as Apple. We want to emphasize that we are not permanent bears on Apple. However, we also believe investors should follow the numbers, and, in our opinion, these aren’t consistent with the narrative that had driven the stock to its highest premium vs. the S&P 500 since 2011, when iPhone penetration was accelerating,” Hall wrote.

Hall pointed out Apple is trading at the largest premium to the S&P500 on a next twelve months basis despite known production woes this fall. 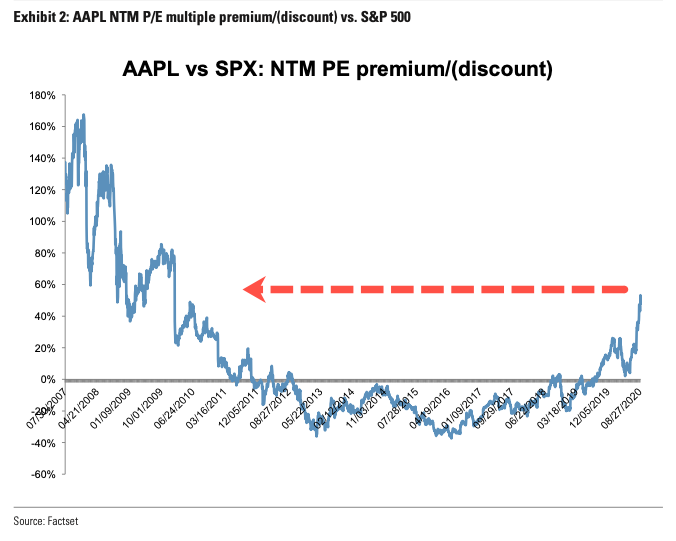 He said the latest rally in Apple shares (pre-selloff) is mainly due to “increased retail participation.” 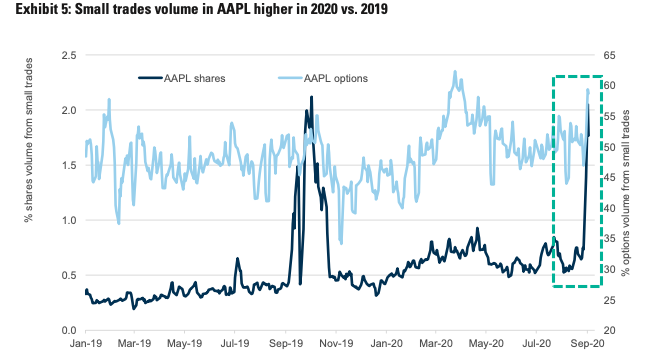 Hall noted, “… yet Apple is valued like a growth company:”

“We show Apple’s P/E compared to the other FAAMG stocks. Here we see that Apple at 31x trades on a forward P/E similar to that of Microsoft (31x), Google (28x) and Facebook (28x) despite having much slower forecast growth. Note that our own sales growth expectations for Apple (+2% CY19-22 CAGR) are even lower than the consensus forecasts (+7%) shown in Exhibit 15.” 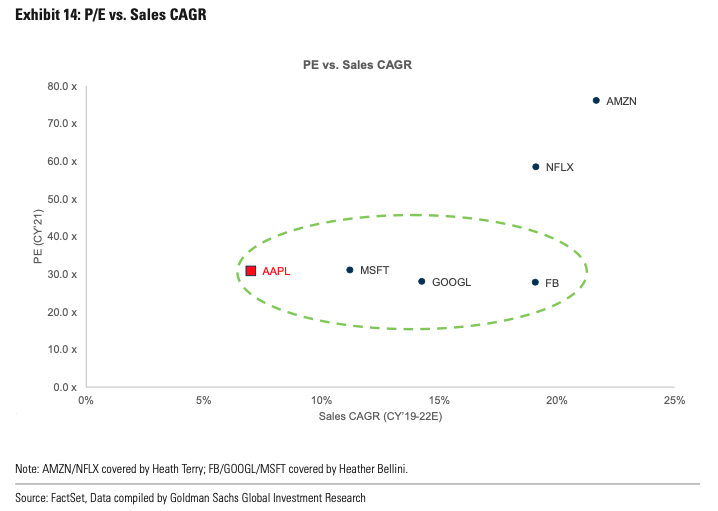 Hall wrote, “another way to look at this discrepancy is to compare PEG ratios for these same stocks. Here we see that Apple is trading on a premium to all other FAAMG stocks. If we were to use our own EPS forecasts, Apple’s PEG would be a much higher 6x while the other companies’ PEGS would remain similar.” 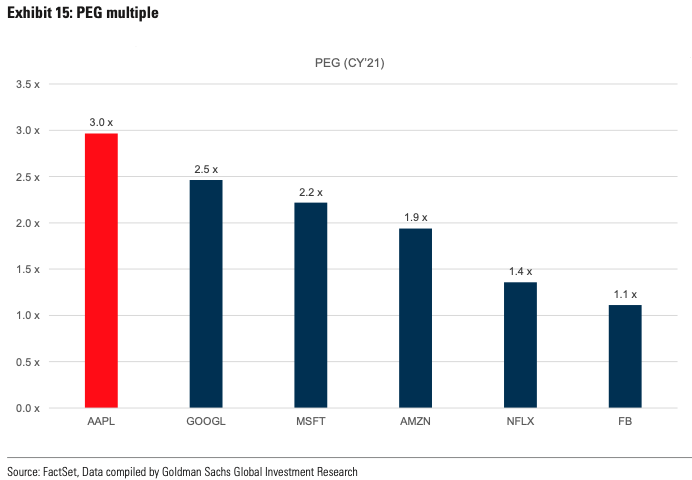 Hall said the “ongoing confirmation from suppliers that Apple’s build is delayed and that the new iPhone launch is likely to be staggered” doesn’t support current valuations, leading to a revision of the company’s revenue forecast for the fourth quarter of 2020.

“We decrease our FQ4’20 (Sep’20 QTR) revenue estimate by 7% to $63.7bn but increase our FQ1’21 and FQ2’21 revenues by 2% and 1%, respectively, as we push out ~4m iPhone units from FQ4’20 to FQ1/FQ2’21 given ongoing confirmation from suppliers that Apple’s build is delayed and that the new iPhone launch is likely to be staggered. We also reduce our FQ4’20 iPhone ASP forecast to better reflect lower-priced products in the mix, given the popularity of the SE. Overall, our EPS forecasts decrease by 2% in FY’20 but increase by 2% in FY’21 due to the shift of units into the early part of that year,” Hall wrote.

And with Softbank’s Masayoshi Son‘s option purchases, sending FAAMG skyhigh – it appears a dose of reality is hitting Apple as it’s 5G supercycle might not be as robust as previously thought.

It’s Time To Declare Your Independence From Tyranny, America

For The First Time Ever, Greece Issues Negative Yielding Debt