By Nicholas Colas of DataTrek Research

With the Federal Reserve meeting this week, we got to thinking about what playwrights call “Second Act problems”. Act One introduces the characters, lays out the challenges they face, and makes the audience care about both. Act Three provides resolution, with comedies ending “happily ever after” and tragedies with death and despair.

Acts one and three are pretty straightforward in terms of the Fed’s current narrative: March – May’s COVID Crisis was Act One and Act Three will be the eventual normalization of monetary policy.

But Act Two is much harder to write, as Pulitzer Prize winner David Mamet once described: it is “not the beginning and not the end, (it is) the time in which the artist and the protagonist doubt themselves and wish the journey had never begun.” It is also filled with “quotidian, mechanical and ordinary drudgery”. Act Two, in other words, is real life.

A few examples of the real-world problems in the Fed’s Act Two:

#1: Wednesday will see the release of the latest Summary of Economic Projections (SEP), the FOMC’s estimates of future economic conditions:

Takeaway: the new SEP will likely see an upgrade of the FOMC’s economic projections, forcing the Fed to defend its still highly accommodative policy stance. Separately, our personal opinion is that the Fed will stop issuing SEPs in December 2020. In the August 27th update to its “Statement on Longer-Run Goals and Monetary Policy Strategy”, the section which previously mentioned the SEP was deleted and there is no longer any reference to it (see links below).

#2: What is the current state of the US economy, exactly; is it still accelerating off the bottom or stalled? 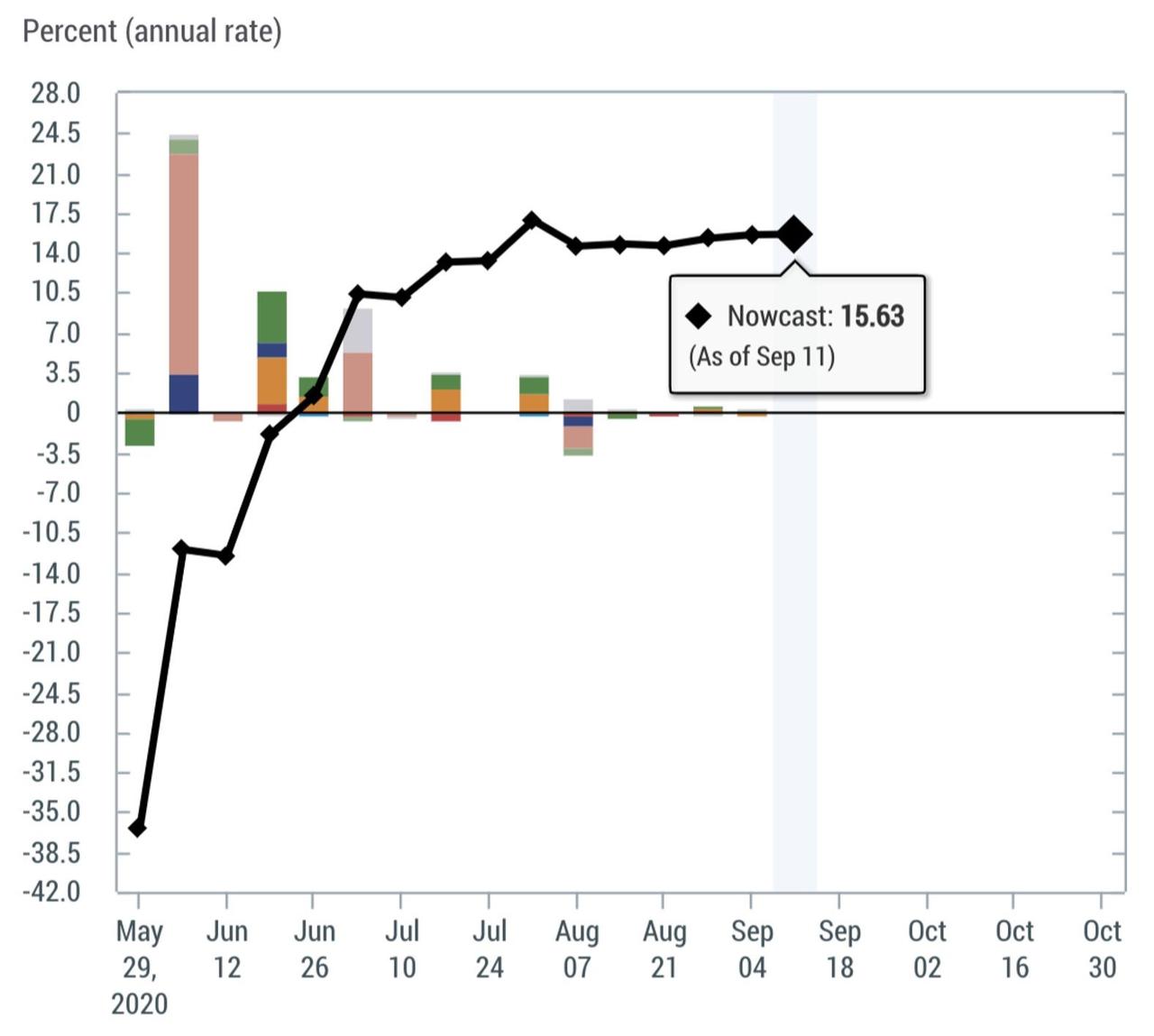 And the Atlanta Fed’s GDPNow model agrees (at least based on September’s data), but is looking for 30.8% GDP growth versus about 20% from blue chip economists: 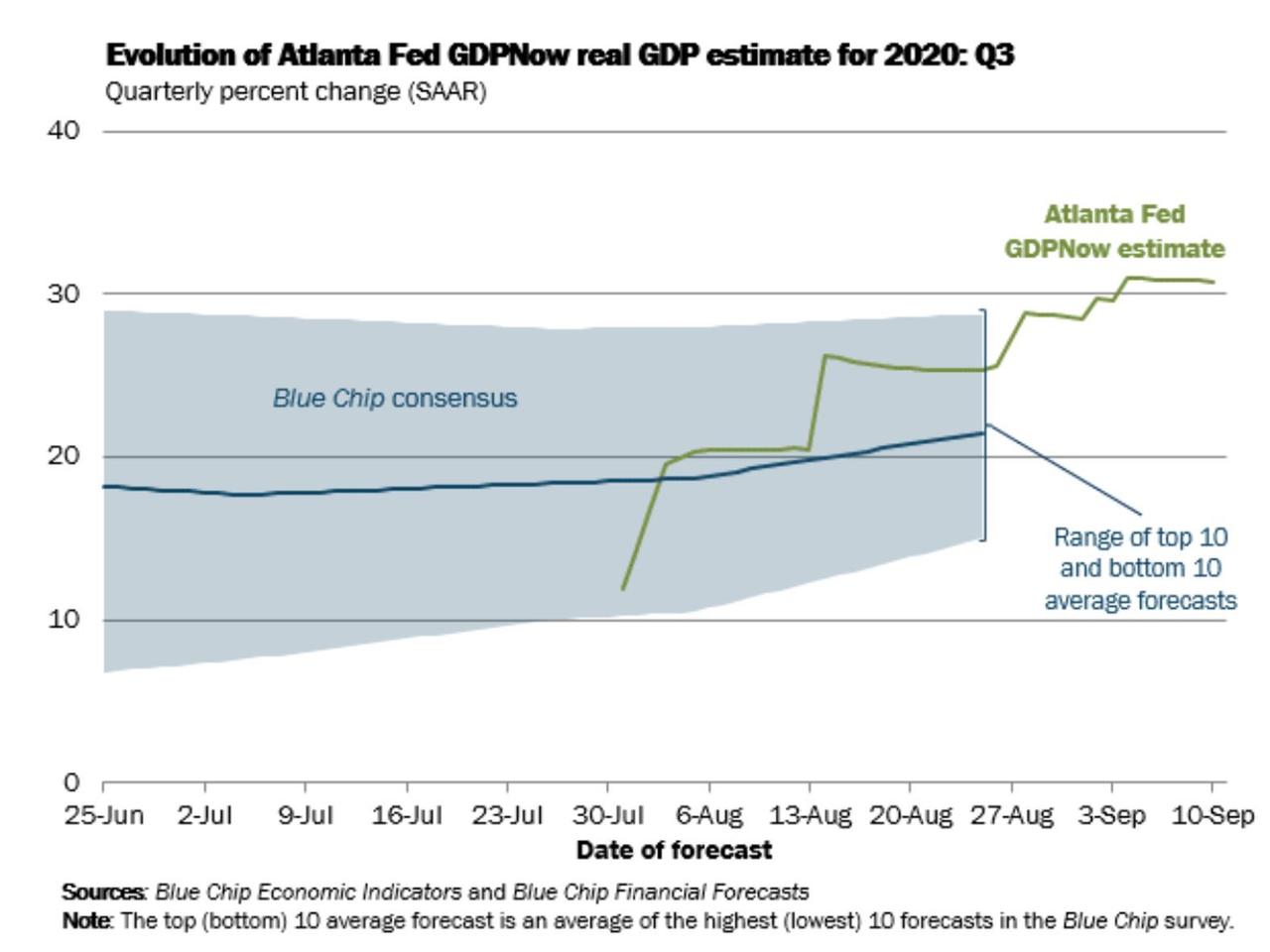 Takeaway: this is a classic Act Two problem, dealing with the real-world issues of how ongoing COVID-related economic constraints limit future economic improvement. The NY Fed’s Weekly Economic Index is slightly more positive on recent economic trends (link at the end of this section) but is a relatively new indicator so we’ll take its more constructive message with a grain of salt for now.

#3: How FOMC decisions affect stock prices, the real-world problem that matters most to us. Since we’re 2 days away from an FOMC decision, it’s worth reviewing “The Pre-FOMC Announcement Drift”, aka the “Fed Drift”.

Takeaway: first and most obviously, the revised Fed Drift says we should rally this week with Wednesday’s meeting conclusion and new SEP and today’s move higher may well be algorithmic front-running of that phenomenon. Second, if we are right that the Fed will retire the Summary of Economic Projections in 2021, then we will have a new chapter of the Fed Drift to consider.

#1: The pace of the current US economic recovery is too slow and uncertain for the Federal Reserve to meaningfully alter its policy stance any time soon. Yes, it has slowed its net asset purchases to zero since June (see chart link below) but these would certainly return if the US economy slowed and financial conditions began to deteriorate again. As for policy rates, those will be locked near zero for at least a year according to Fed Funds Futures and 2-year yields.

#2: Real (world) rates will continue to support high equity valuations. Ten-year TIPS, for example, currently yield -1.0% and the implied inflation breakeven is 1.6%, right where it was pre-COVID. Why own a 10-year Treasury at an all-time worst negative real return when the S&P 500 yields 1.5% and offers the chance of rising payouts over time?

#3: The Fed knows its Third Act (normalizing policy) has to wait until the Second Act comes to a natural conclusion.

Bottom line: with fiscal stimulus likely off the table through the November elections, the Fed knows it is alone in carrying the Act Two narrative forward for now. That should be a good backdrop for US equities through year end.

NY Fed Weekly Economic Index, which does show some recent improvement in the US economy: https://www.newyorkfed.org/research/policy/weekly-economic-index#/interactive

The Fed’s 2020 Markups to Its “Longer Run Goals” Statement, where it deletes mentions of the SEP: https://www.federalreserve.gov/monetarypolicy/guide-to-changes-in-statement-on-longer-run-goals-monetary-policy-strategy.htm