Here Are The “Fascinating Scenarios” For Markets: Wall Street Responds To RBG’s Death

Here Are The “Fascinating Scenarios” For Markets: Wall Street Responds To RBG’s Death

Over the weekend, in looking at the political and market chaos unleashed by the passing of SCOTUS Justice Ruth Bader Ginsburg, we said markets are now facing a “nuclear scenario” and summarized the lay of the land by as follows:

Simply put, the political quagmire unleashed by the passing of Ruth Bader Ginsburg leaves the market in an even more precarious position since if a contested election was a source of great uncertainty before, a 4-4 SCOTUS extends that uncertainty even further as we already know there will be no concessions for weeks, and the extensions of mail-in ballots will merely add fuel to the fire of what is shaping up as the most contested election in US history.

In short, this is the “worst case scenario” – that JPMorgan just warned about last week  when envisioning a contested election’s impact on markets – on steroids, since The Fed has nothing new to offer and fiscal stimulus will definitely be off the table now until an election decision is made, a decision that may not comes for months without a SCOTUS tiebreaker vote.

Sure enough, this morning a plethora of Wall Street analysts took the stage to confirm our initial take, and explaining in their own words, why the death of RBG is sending futures sharply lower this morning, starting with Rabobank’s Michael Every who had this to say:

The death of US Supreme Court justice Ruth Bader Ginsburg … makes the US election even more important and heated than it already was – and harder to call. Listen to US commentators and all other topics are now secondary, including both the economy (bad for Trump) and Covid-19 (good for Trump). Republicans and Democrats are incredibly fired up given the outcome of the election could shift the balance of the court for a generation. Imagine if it shifted to 6-3 conservative; also imagine if no judge is appointed and it is then tied 4-4 when having to rule on a key element of what is widely expected to be a legally contested election; imagine the court being increased to 11 by Biden if he were to win; and imagine it going up to 15 or 17 if a Republican wins in 2024. This election was already seen as a potential risk event: arguably far more so now.

Next we go to DB’s Jim Reid who summarizes the outcome of RBG’s death as unveiling “lots of fascinating scenarios” to the table.

President Trump said that he would put forth a nominee to fill the seat and Senate Majority Leader McConnell said “President Trump’s nominee will receive a vote on the floor of the United States Senate,” indicating that Republican leadership will try to fill the seat ahead of the election.This represents a turn in the Majority leader’s thinking from 2016, where he did not allow a floor vote for then-President Obama’s nominee in an election year. The nomination and confirmation process will introduce a new element to an election not least because the court can hold sway over highly contentious issues like healthcare, abortion rights and gun law.

It brings lots of fascinating scenarios to the table. If Trump succeeds at getting his nomination through before the election there will be a 6-3 Republican bias to the Supreme Court which as discussed could have policy ramifications for the US for a generation. Democrats are up in arms that the Republicans won’t wait until after the election and are suggesting that may do extraordinary things to address the balance (like adding new judges to the bench) if they gain control of both the Senate and the White House. Congress altered the size of the bench seven times in the first eighty years of the republic (ranging from 5 to 10 justices) but this has not changed since the Judiciary Act of 1869. However getting the current Senate to confirm a nominee won’t be straight forward for Mr Trump as the GOP only hold a 53-47 majority in the Senate (with Vice President Pence serving as the tie-breaker) and a few members have already made noises that they don’t think a new judge should be added this close to the election. So even more drama added to an election campaign.

Finally, we present the Monday morning thoughts from Morgan Stanley analyst Michael Wilson who now expects a second leg of a market correction as a result of the mounting Fiscal Cliff concerns (which we have been discussing for the past month), coupled with the “Peak Fed” (as pointed out last night), with RBG’s death serving as the nail in the coffin of any hopes of an immediate rebound: “Fiscal negotiations have made little progress and the Fed failed to appease the doves on QE. The combination means lower equity prices before the correction, led by the Nasdaq, is over.”

We think the market is now faced with the following two potential outcomes:

In our view, the second outcome is more likely, while the first outcome would be a much greater threat to the bull market. Markets will be forced to watch and wait. At the end of the day, markets wobbling will be part of the pressure required to get a deal done. The question is how much pressure will be necessary.

This correction began on September 2, when equity markets failed to break through formidable longer-term resistance. The reasons are often unimportant at such junctures as the technicals simply take over, much like in August when markets went seemingly parabolic for “no reason.” Speaking of August, at this point, we think everyone understands the speculative drivers from both retail and certain institutional buyer(s) of call options in large cap technology stocks. The subsequent reversal of that speculation was naturally concentrated in those stocks too (Exhibit 2). 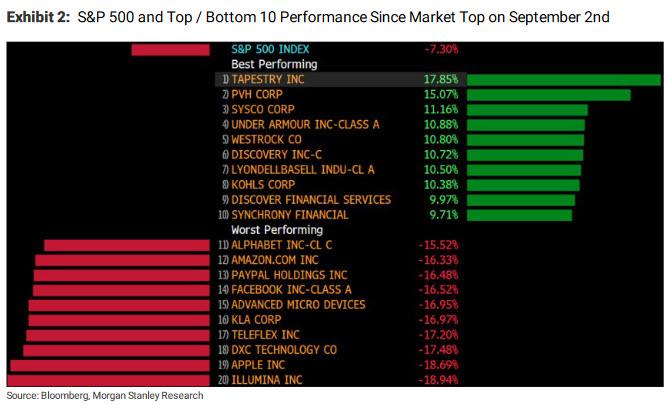 Perhaps even more interesting is the fact that the best performers this month have been stocks most levered to a continued economic recovery. In other words, the market does seem to be looking through the near-term risk of congressional legislative wrangling and expects something to get done. This means sustainable growth but higher back end rates – i.e. cyclicals over growth and defensives. Implicit in such a conclusion is our view that higher back end rates due to better growth and higher inflation should dissuade the Fed’s decision to engage in yield curve control.

Finally, the unexpected death of Supreme Court Justice Ruth Bader Ginsburg could stall passage of CARES2 in the near term as Democrats may back away from the bill if the President nominates his Supreme Court choice prior to the election.

In short, we believe the odds of scenario 1 may have just gone up, at least with respect to the timing of the next stimulus, and that could weigh on all equities and rates in the near term.

In conclusion, as the fog of political war lifts and as more clarity about the process of RBG’s replacement emerges, expect to see even more violent reactions in the market as the cascading consequences of the vacant SCOTUS seat flow through both the upcoming highly contested presidential elections, which as JPM already said is the “worst case scenario” for the market, and investor sentiment which is finally realizing that the record post-March rally is finally coming to an end.

Jeff Deist on Hoppe’s Democracy: The God That Failed

For Second Week In A Row, Fed Buys Treasuries (QE4!?!)

Is the Third-Person Effect Driving Calls to Regulate Facebook?