With the news and outrage cycle in need of a fresh Trump reset now that the first presidential debate is just two days away, on Sunday afternoon – almost exactly two years after the NYT first published a report alleging how Trump “engaged in suspect tax schemes as he reaped riches from his father“, the NYT published what to many anti-Trumpers is the holy grail of Trump bomshells: a 10,000+ word recap of more than two decades of Trump tax documents which reveal that the president paid no income taxes for 10 of the 15 years before he was elected president, with his income tax payments in 2016 and 2017 amounting to just $750. The reason, as was already largely known, Trump had generated nearly $1 billion in Losses in the 1990s and onward (which he could apply as NOLs against future income) and which offset any money that he made.

The NYT also claims the documents show Trump losing millions of dollars from his golf courses, “vast write-offs, an audit battle and hundreds of millions in debt coming due” and that Trump earned $73 million abroad.

Combined, Trump initially paid almost $95 million in federal income taxes over the 18 years. He later managed to recoup most of that money, with interest, by applying for and receiving a $72.9 million tax refund, starting in 2010.

“The Apprentice,” along with the licensing and endorsement deals that flowed from his expanding celebrity, brought Mr. Trump a total of $427.4 million, The Times’s analysis of the records found. He invested much of that in a collection of businesses, mostly golf courses, that in the years since have steadily devoured cash — much as the money he secretly received from his father financed a spree of quixotic overspending that led to his collapse in the early 1990s.

The NYT report focuses closely on the specifics of the $73 million refund:

A large refund has been crucial to his tax avoidance.

Mr. Trump did face large tax bills after the initial success of “The Apprentice” television show, but he erased most of these tax payments through a refund. Combined, Mr. Trump initially paid almost $95 million in federal income taxes over the 18 years. He later managed to recoup most of that money, with interest, by applying for and receiving a $72.9 million tax refund, starting in 2010. The refund reduced his total federal income tax bill between 2000 and 2017 to an annual average of $1.4 million. By comparison, the average American in the top .001 percent of earners paid about $25 million in federal income taxes each year over the same span.

The $72.9 million refund has since become the subject of a long-running battle with the I.R.S.

When applying for the refund, he cited a giant financial loss that may be related to the failure of his Atlantic City casinos. Publicly, he also claimed that he had fully surrendered his stake in the casinos. But the real story may be different from the one he told. Federal law holds that investors can claim a total loss on an investment, as Mr. Trump did, only if they receive nothing in return. Mr. Trump did appear to receive something in return: 5 percent of the new casino company that formed when he renounced his stake. In 2011, the I.R.S. began an audit reviewing the legitimacy of the refund. Almost a decade later, the case remains unresolved, for unknown reasons, and could ultimately end up in federal court, where it could become a matter of public record.

A visual summary prepared by the NYT of Trump’s profit and losses is shown below: 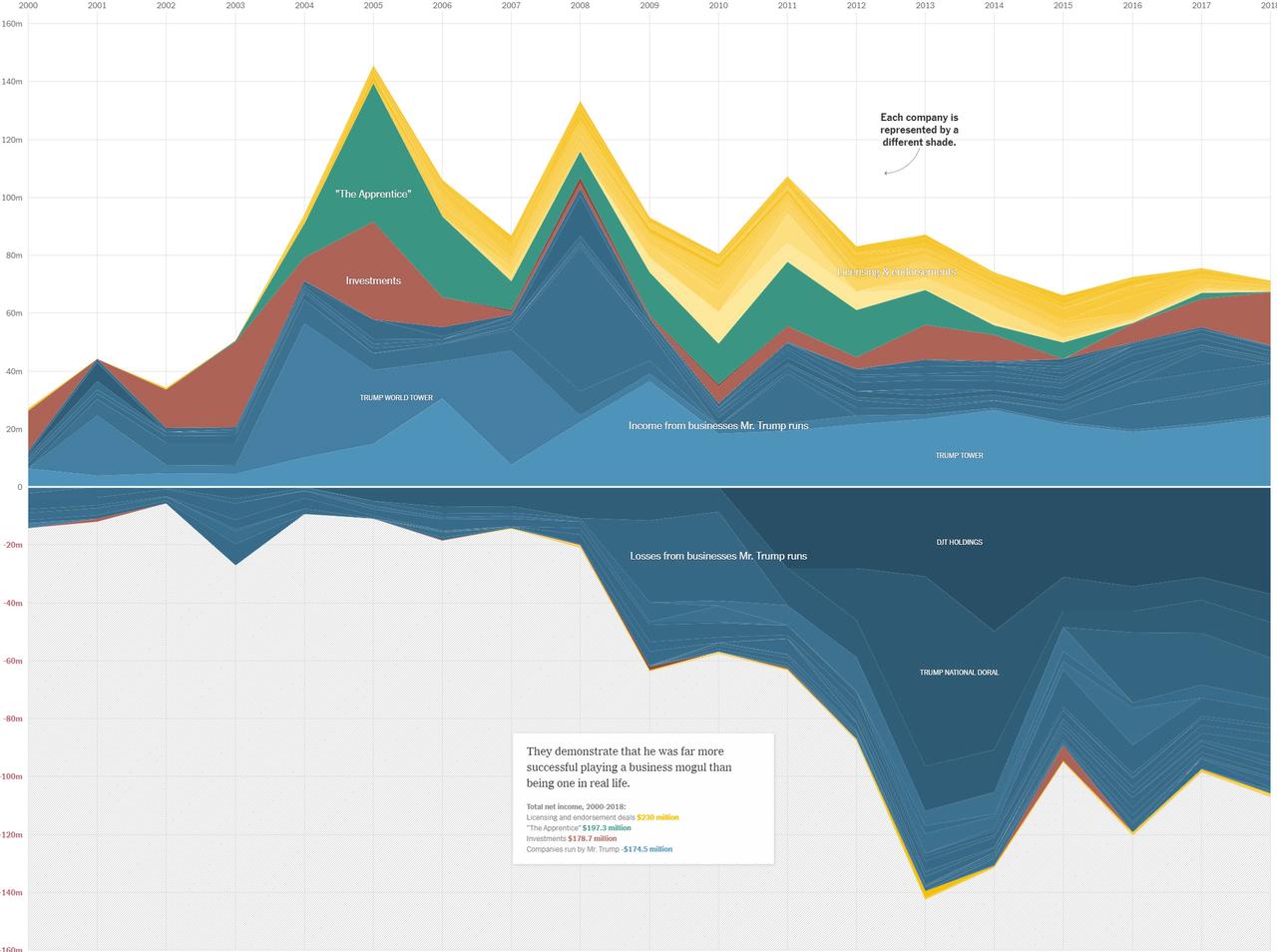 One argument made by the NYT is that by the time Mr. Trump announced his candidacy in 2015, “his revenue streams from “The Apprentice” and licensing were drying up”, his “proceeds from fame continued to tumble, falling below $10 million in 2017 and to $2.9 million in 2018” and Trump “was in need of financial reinvigoration.” This is where the idea to run for president came form. 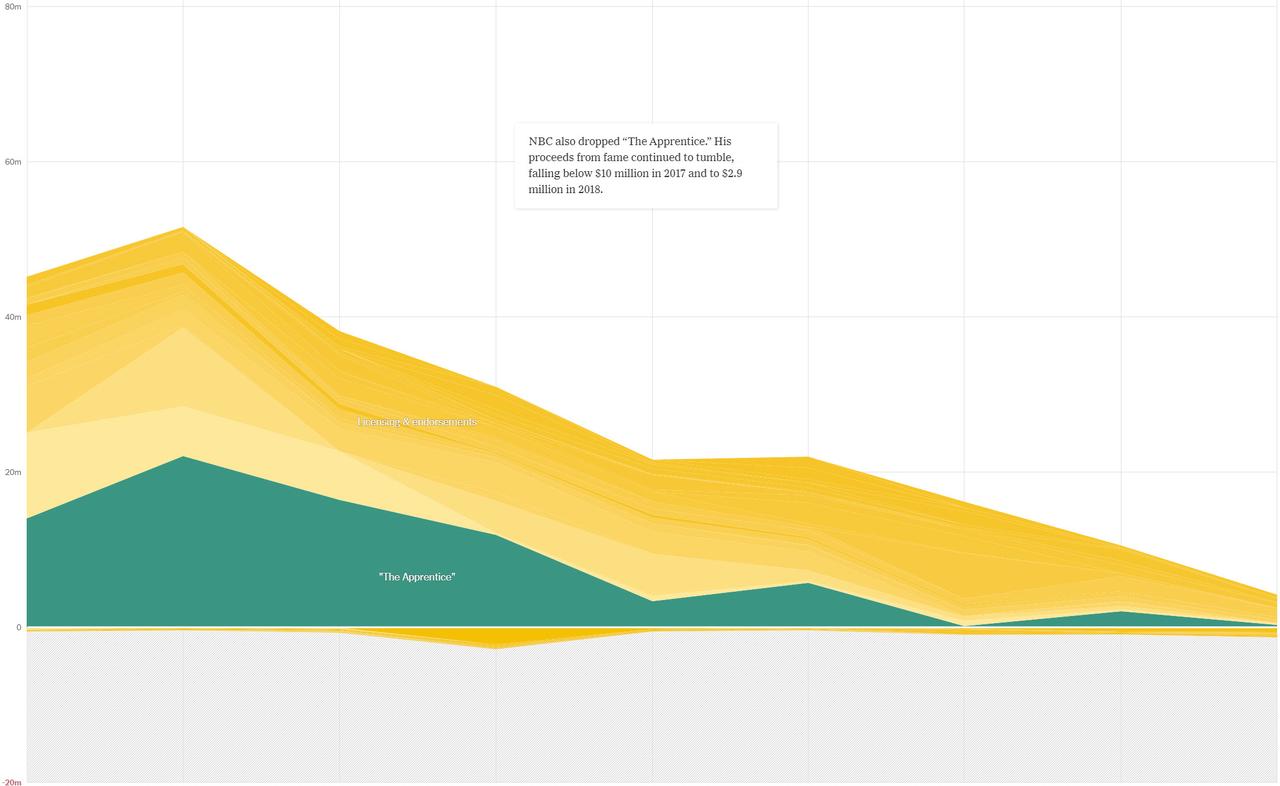 The question then is, since there appears to be no discovery of legal malfeasance, did Trump’s businesses benefit from the presidency which the NYT responds affirmatively “in some respects” pointing to the flood of new members in Mar a Lago “starting in 2015 allowed him to pocket millions more dollars a year from the business.”

And without a blockbuster “gotcha” that would indicate Trump violated law, the NYT simply concludes by noting that “in the end the financial picture for Mr. Trump is fraught” and that “as he approaches one of the most consequential elections in American history — down in most polls, under I.R.S. audit and heavily in debt — his businesses may not be well equipped to navigate what lies ahead.”

While notable, and hardly unique to just the president, this is probably not the damning climax so many in the anti-Trump field were expecting in the 4-year-long crusade to get Trump’s tax returns. Oh yes, and then there is the audit, the same audit Trump has said prevents him from publishing his tax filings:

Hanging over his head is the audit. Should the I.R.S. reverse the huge refund he received 10 years ago, Mr. Trump could be on the hook for more than $100 million.

Since the question of where all this information came from will likely be scrutinized, the NYT noted that “all of the information The Times obtained was provided by sources with legal access to it” adding that “while most of the tax data has not previously been made public, The Times was able to verify portions of it by comparing it with publicly available information and confidential records previously obtained by The Times.”

Those arguing that the report may paint a one-sided picture of Trump’s tax returns will be out of luck hoping that the NYT would publish the source data:

“We are not making [Trump’s tax] records themselves public because we do not want to jeopardize our sources, who have taken enormous personal risks to help inform the public.”

The article also admits “the filings will leave many questions unanswered, many questioners unfulfilled,” and also kills off the idea that President Trump’s finances were somehow linked to Russia. The piece reads: “Nor do [the tax returns] reveal any previously unreported connections to Russia.”

This must’ve been a real heart-breaker for the NYT pic.twitter.com/VohduSuBwe

For those pressed for time, here is a recap of the key revelations in the NYT article, which the NYT recapped in a separate article:

While the media will be going through all of these revelations with a fine-toothed comb, it’s also notable what the report fails to show: unless the NYT has saved the kicker for a subsequent article, “there appears to be no wrongdoing, no Russia ties, and nothing of substance beyond what most corporations do”, as the National Pulse’s Raheem Kassam writes.

Also of note, the New York Times failed to include the details of the returns in its reporting, admitting in its own article: “The Times declined to provide the records, in order to protect its sources.”

When asked during a Sunday news conference about the NYT revelations, Trump called the central claim the NYT makes – that he only paid $750.00 in federal income taxes – “fake news.”

In a statement to The Times, Trump Organization lawyer Alan Garten said “most, if not all, of the facts appear to be inaccurate” and reportedly took issue with the amount of taxes Trump has paid: “Over the past decade, President Trump has paid tens of millions of dollars in personal taxes to the federal government, including paying millions in personal taxes since announcing his candidacy in 2015.”