JPM Downgrades Tech Sector For The First Time In Two Years: Here’s Why

JPM Downgrades Tech Sector For The First Time In Two Years: Here’s Why

Perhaps there was some miscommunications (again) within JPMorgan’s trading desks, but whatever the reason, just hours after JPMorgan’s Nick Panigirtzoglou published a report full of “brutal honesty” in which the quant admitted that the best possible outcome for stocks would be economic devastation, writing that “although it has had a negative impact in the short term, the reemergence of lockdowns and resultant growth weakness could bolster the above equity upside over the medium to longer term via inducing more QE and thus more liquidity creation“, another JPM strategist, the head of US equities Mislav Matejka took the opposite direction, and told clients that JPMorgan was downgrading Tech – the sector that has driven the recovery rally since March – from Overweight to Neutral after two years of being bullish on the space as he now forecasts a change in market leadership, no matter who wins the vote. To wit:

Take profits on Tech, moving from OW to N. We held OW Tech the whole year, as well as the whole of last year. We continue to believe that Tech fundamentals are supportive, through strong balance sheets, significant buybacks, structural tailwinds and earnings delivery, but the relative outperformance could start waning.

Matjeka’s downgrade comes after the Nasdaq 100 tumbled nearly 9% since Oct. 12, and is just shy of correction from its Sept 2 all time high, when according to David Einhorn, the tech bubble burst. The downgrade came amid a renewed push by JPM analyst to peddle value stocks to clients, while allowing its prop desk to buy all the growth they have to sell. 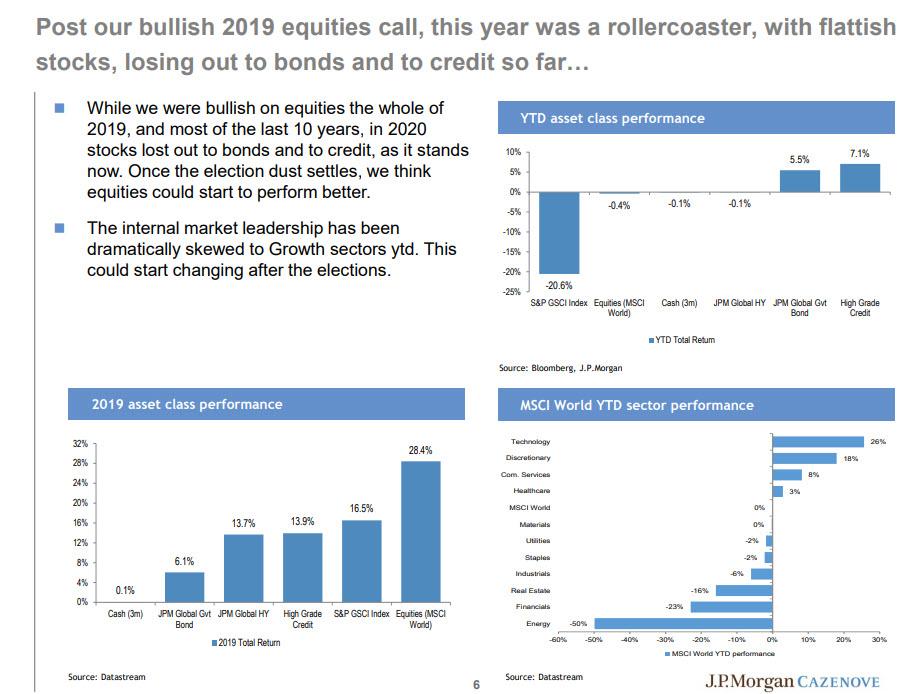 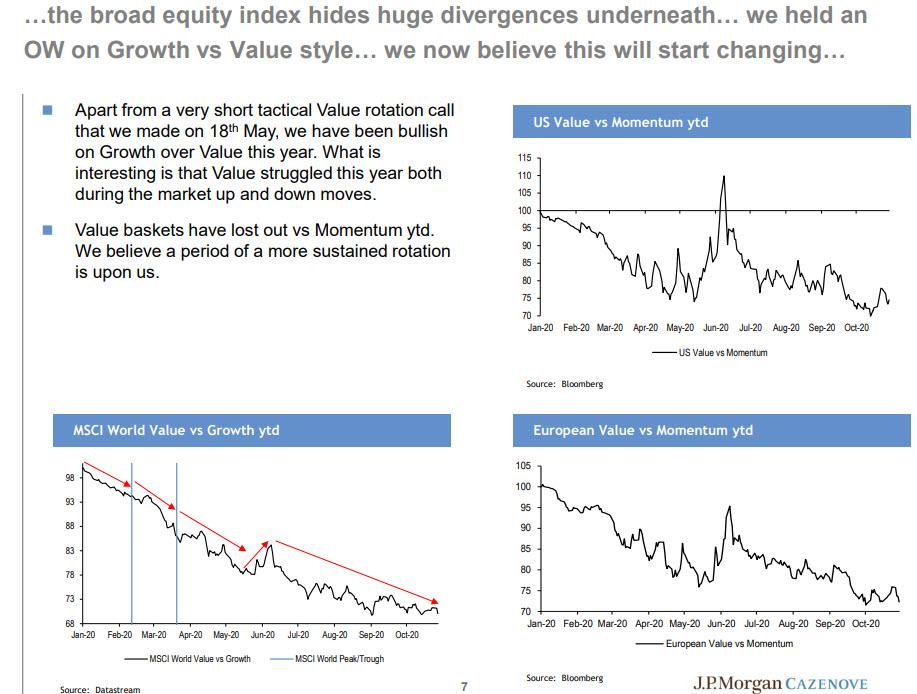 Here is come more context from Matejka for why he is changing his outlook:

We argued during September and October that markets will face a negative risk-reward due to significant event risk coming up, as well as the mini “W” part of the cycle that we need to negotiate. S&P500 has spent the past 8 weeks under pressure, down 9% since early September high, and SX5E is down 11% since then. Notably, SX5E has not made any gains for as long as the last 6 months, and Value vs Momentum last week hovered at ytd lows, which was consistent with German bond yields falling to fresh multi-month lows, making numerous pundits who argued for some time now that the rotation is coming look premature.

Of course, anyone who followed JPM previous rotation calls got hammered, but the bank now believes that “the risk-reward is turning better.” Why? “Because the elections are in front of us, and any clear result is likely to be seen as a positive, with investors then able to look forward to a fiscal stimulus down the line.” Amusingly, the same analyst who last week said that a Trump landslide would be the best case outcome, is now adjusting that call too, and see virtually any outcome as positive for stocks (for the reason why, read the comments from his co-worker Panagirtzoglou who made it clear that the presidency is irrelevant and only the Federal Reserve matters):

Stalemate/contested elections would lead to further risk-off trading, but we believe that if such a scenario arises, one should be using the weakness as an opportunity to add exposure on a 3-6-month horizon. If there is Blue Wave, that might initially lead to some weakness, as investors would worry about the swing to market-unfriendly policies, but we believe that this too will be an opportunity to add, as the fiscal support will likely be ramped up significantly, USD could fall, yield curve steepen and the trade uncertainty ease. We believe the markets are primed for a broadening in leadership, having seen record ever bifurcation so far ytd. The magnitude of the mean-reversion will depend on the path of USD and bond yields, but the sector & style rotation is likely to get underway irrespective of the US elections winner, while the regional rotation would be more dependent on the actual election outcome, in our view.

The bottom line, “U.S. leadership has been consistent with growth outperforming value, and tech outperforming banks. This might not continue in 2021.” On the other hand, it might. 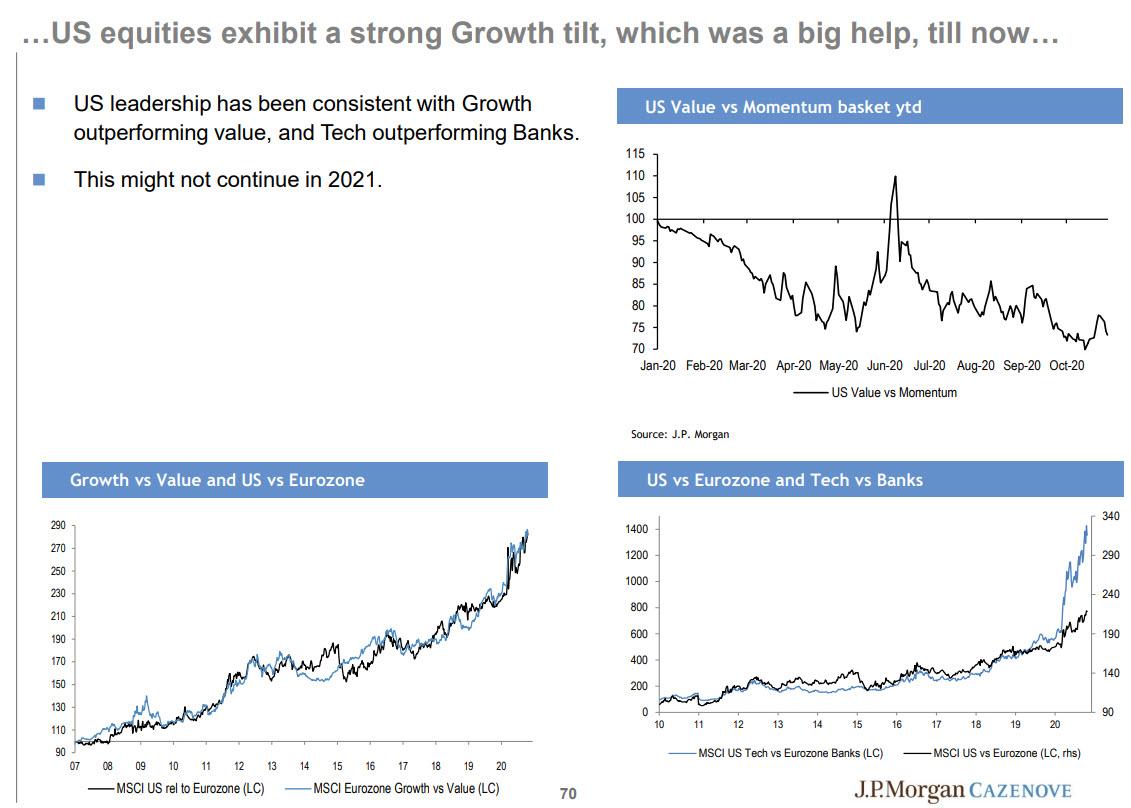 At the same time as trimming tech, JPM upgrade banks, from N to OW, on expectations of higher yields, which would also lead to accelerated tech selling:

[Banks] were a terrible performer ytd, down 42% in Eurozone. It looks very cheap, on 0.4x TB, and balance sheets are resilient this time around, without the need for dilution. Any move up in bond yields would be welcome for the sector. Upgrading Insurance from N to OW. Insurance is down as much as 32% ytd, but the credit spreads are holding up, and the dividends could be reinstated.

In short, no matter who wins, stocks will go up, which of course is correct as long as the Fed keeps monetizing the US debt and helicopter money is the rule of the land. Of course, the JPM strategist could not say that – as that would mean he no longer has a job in a world in which only the Fed’s actions matter and no amount of analysis has any relevance.

Why the Government Can’t Measure Income, Happiness, or Well-Being

The Fed Won’t Save Us from the Growing Jobs Recession

US To Lead Biggest Military Drill In Europe Since Cold War, Showing NATO How It’s Done