Key Events In The Coming “Huge Week” For Global Markets

Key Events In The Coming “Huge Week” For Global Markets

The coming week will be the busiest and most important 5 days of the year, if not decade. It is a “huge week” for investors with the election, a Fed decision, 128 S&P earnings, October payrolls, ongoing pandemic lockdowns and a ton of economic data all due.

“Whichever way you look at it, this coming week will be huge for U.S. and global markets,” said Simon Ballard, chief economist at First Abu Dhabi Bank PJSC. “We see the potential for a sharp rise in volatility around these events — and all in the context of a still deteriorating Covid-19 situation across much of the U.S., Europe and elsewhere.”

Starting with the pandemic, as DB’s Jim Reid writes this morning, Europe is facing up to a harsh winter ahead. The question to be asked to all the European countries is can they come out of these measures in some form towards the end of November/early December as is hoped or will they be extended further. The hit to the U.K. economy which just announced a new round of lockdowns will be softened by an extension of the furlough scheme but that will only add more to the debt. The hope everywhere is that well before the winter/spring peak virus season is over we’ll have the start of a vaccine program or more realistically in the near term a huge advance in rapid result testing. The latter has to be the greatest hope of restrictions being eased before a vaccine has mass rollout. Meanwhile, overnight Bloomberg reported that Italy might tighten restrictions further today with PM Conte wanting more localised curbs depending on virus transmissions – something some regional authorities are resisting.

Covid aside, of course the top event this week be tomorrow’s US election off the front pages for the next few days: 93.29 million have already voted so far, which is 67.7% of 2016’s total, and as Reid notes, “It’s fair to say markets could look very different on Wednesday morning as a “Blue Wave”, if it happens, should get the stimulus junkies hungry to buy and a divided government could remind people of the long winter ahead. So a very big week.“

While it is possible that we will not know the winner tomorrow night, due to the high number of mail-in ballots and the various state procedures around them, we will likely have some indication of how the race is leaning, according to DB. Florida and North Carolina could give a firm signal on the state of the race early on, as both have seen large numbers of early voters and are able to process and count mail-in ballots ahead of tomorrow’s poll closures. Without either of those states, President Trump’s path to re-election narrows. Polling averages continue to show a consistent lead for former Vice President Joe Biden, who is ahead by +8.5pts in the FiveThirtyEight national average, and by +7.2pts in the RealClearPolitics average. However, he leads by a lesser +3.3pt margin in RCP’s average of top battleground states. There will also be a big focus on the Senate races, with the FiveThirtyEight model giving Democrats a 76% chance to win control as we type.

Looking forward, attention will also be back on central banks for a second straight week, with both the Federal Reserve and the Bank of England announcing their latest monetary policy decisions on Thursday. Starting with the Fed, the central bank is expected to remain in a holding pattern this meeting but may lay groundwork for action at future ones. We are also likely to hear even more on the need for fiscal stimulus, as the minutes from the last meeting showed that many central bankers had included it in their outlooks. It could also be interesting to hear how the election results, if we have them, alter that outlook. For the Bank of England meeting that’s also on Thursday, our economists expect (link here) a dovish committee, with the November Monetary Policy Report highlighting further downside risks to the UK and the external growth outlook. They also see the majority of the MPC voting for additional stimulus, with £60bn added to the Bank’s Asset Purchase Facility. The latest lockdown could easily see this increased or see the probability of greater action.

On the data front, the final October global manufacturing PMIs continue today in addition to the US ISM reading, before we see services and composite PMIs on Wednesday and Thursday. Also on Wednesday, we will see October inflation data for the Euro area. The week will end with US October payrolls and unemployment data on Friday. Never has payrolls been so far down the pecking order. 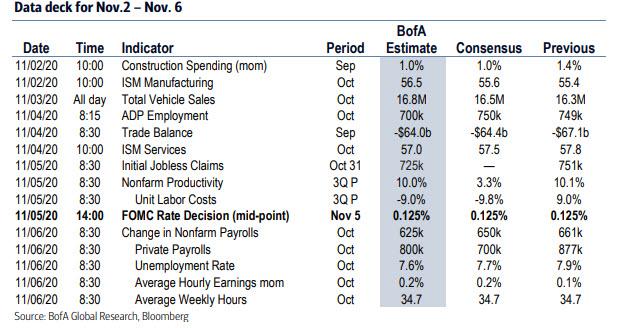 Lastly, it’s another big week on the earnings side too, with a total of 128 companies in the S&P 500 reporting over the week, along with a further 96 from the STOXX 600. In terms of the main highlights, today we’ll hear from Siemens, Clorox, Estee Lauder, PayPal Holdings and SBA Communications. Then on Tuesday, we’ll get releases from BNP Paribas, Bayer, Ferrari, Johnson Controls International, Humana, and Eversource Energy. Wednesday then sees reports from Danske Bank, Consolidated Edison, Vestas Wind Systems, QUALCOMM, MetLife, Allstate Corp and Public Storage. Then on Thursday, releases include Bristol-Myers Squibb Co, Zoetis, Linde, AstraZeneca, Regeneron Pharmaceuticals, Microchip Technology, Electronic Arts, American International Group and T-Mobile US. Lastly, on Friday, there’s Hershey, Allianz SE, CVS Health Corp and Marriott International.

Finally looking at just the US, where Goldman notes that the key economic data releases this week are the ISM manufacturing report on Monday, ISM non-manufacturing report on Wednesday, jobless claims on Thursday, and the employment report on Friday. The November FOMC meeting is this week, with the release of the statement at 2:00 PM ET on Thursday followed by Chair Powell’s press conference at 2:30 PM. There are no other scheduled speaking engagements from Fed officials this week reflecting the FOMC blackout period. Election Day is on Tuesday, and states will report results over the course of the night.

If Congress Were Genuinely Interested in Democracy, They Would Welcome an Election Commission

Watch: “I Have No Agenda” – Judge Barrett Battles Dems On Abortion, Obamacare During Day 2 Of Hearings