Berkshire Repurchases A Record $9 Billion In Stock In Third Quarter

Berkshire Repurchases A Record $9 Billion In Stock In Third Quarter

Just a few short years ago, Warren Buffett would not even think of repurchasing Berskhire stock, instead building up a cash war chest which he would deploy to purchase “cheap” companies (although he certainly was a fan of others buying back their stock, such as Apple and – for a while – IBM). However, all that changed in July 2018 when Berkshire’s board announced a policy change that allowed Buffett to buy back stock whenever the price is below whatever they consider Berkshire’s intrinsic value. Previously, they couldn’t make repurchases if the price was more than 20% above current book value.

Since then two things happened: i) the stock market soared so high even Buffett admitted he couldn’t find attractive deals any more, and ii) other investors showed a fond desire to reward companies that repurchased their stock. Which is why, starting about two years ago, Buffett started repurchasing Berkshire stock.

Yet what at first was a slow, methodical process, has since escalated into a full blown sprint to the point where Buffett has become one of the world’s biggest repurchasers of his own stock.

In Q3, Berkshire Hathaway spent a record $9 billion of its own stock according to the company’s just filed earnings release, which as the Bloomberg chart below shows, is more than it had repurchased in any full year in its history. 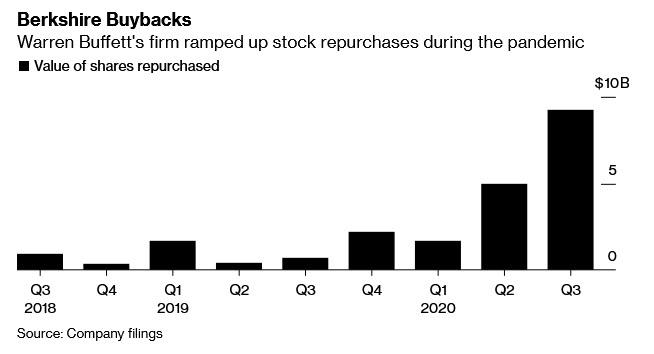 The record buyback meant that Berkshire’s massive cash pile declined slightly in the third quarter, from $146.6 billion to $145.7 billion. The funds, as Bloomberg notes, “have recently been accumulating faster than Buffett can put them to work in higher-returning assets”; they leave Buffett with plenty of capital to deploy into acquisitions, stock purchases or buybacks, if and when there is a market correction. 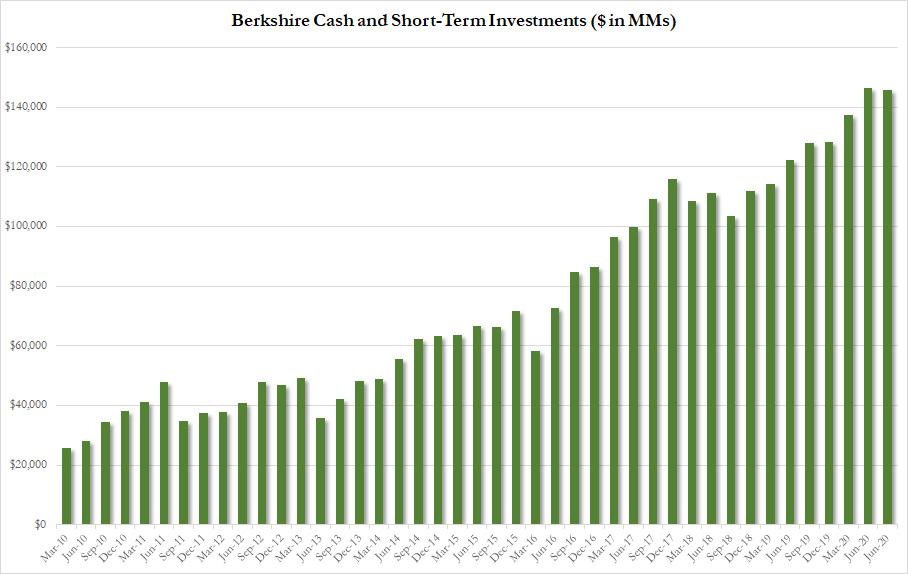 Lacking external investments, the acceleration in buybacks confirm Buffett’s faith in the conglomerate’s prospects, just months after telling Berkshire shareholders at the annual meeting in May that repurchasing shares wasn’t more compelling than when the stock was much higher before the pandemic.

With the help of the buybacks, Berkshire stock soared 20% in the third quarter, surpassing the 8.5% gain in the S&P 500 Index during the same period.

Looking at the rest of the company’s Q3 results, we find that the conglomerate’s businesses bounced back modestly from the depths of the slump in the second quarter. Profit at the railroad was higher than the three months ended June 30 if still down from a year ago, while Berkshire’s utilities posted its highest quarterly profit in more than a decade. Still, operating profit dropped by 32% to $5.5BN from $16.5BN a year ago, hurt by the insurance unit’s first underwriting loss since the end of 2019.

And in another stark reversal, after selling the most stocks on a net basis in more than a decade during the second quarter, Berkshire reversed course in the following months, purchasing $4.79 billion of stocks on a net basis during the third quarter, as he gobbled up shares, not just his own. As shown in the chart above, the company’s investments delivered almost $25 billion in investment gains amid the market rally, helping net income almost double despite the drop in operating profit.

Global COVID-19 Lockdown – What You’re Not Being Told, Part 1