Biden in, COVID out.

Global stocks and S&P futures exploded higher, hitting all time highs, following this morning’s news that a Pfizer covid vaccine is more than 90% effective, which came at a time when stocks were already euphoric in the overnight session following the weekend’s political news that Biden was in.

“This is about the best the news could possibly be for the world and for the United States and for public health,” said William Gruber, Pfizer senior vice president for vaccine clinical research and development. It was better than even the best result he had hoped for, he said.

The news, which conveniently came just days after Biden was declared president elect by the media, sent Emini S&P futures up as much as 4%, last seen up 124 points to 3,634 or up 3.8%… 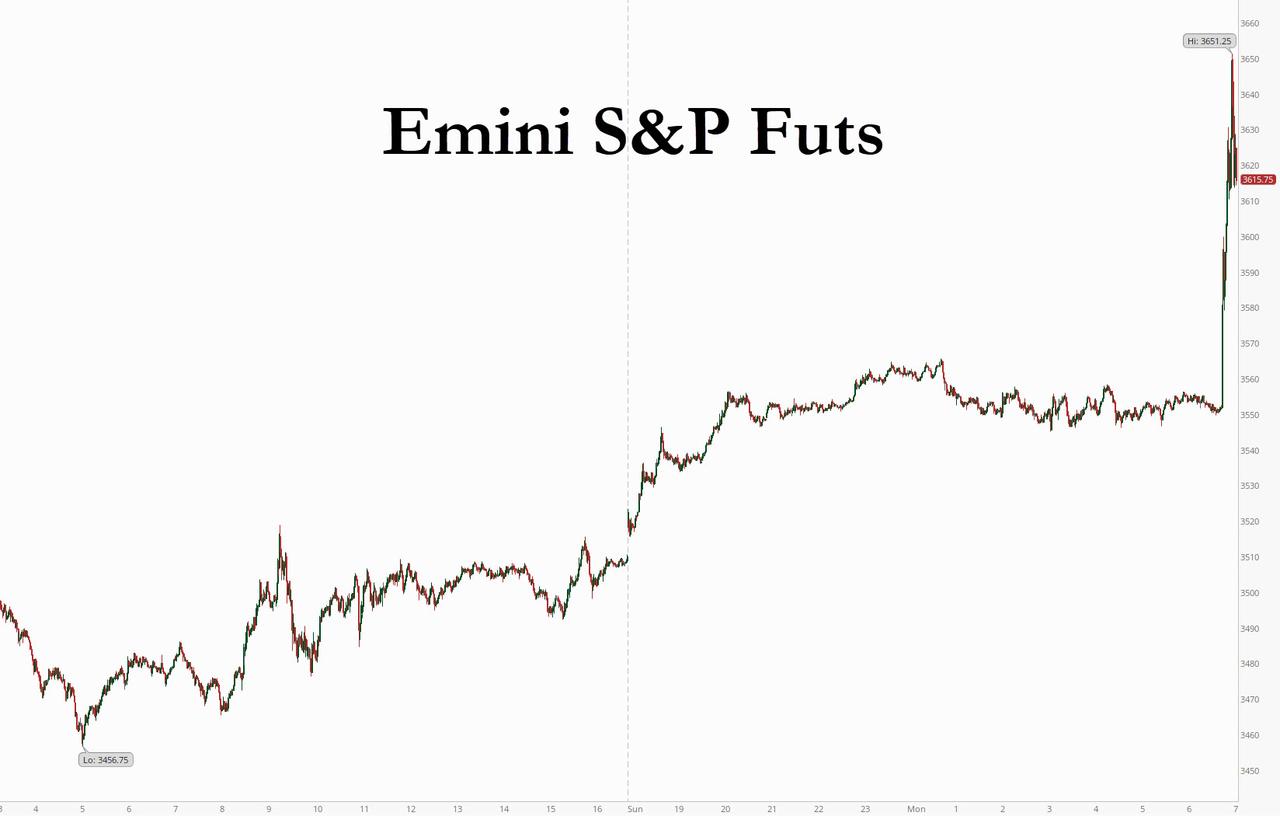 … and hitting new all time highs, surpassing the early September closing record of 3,568. 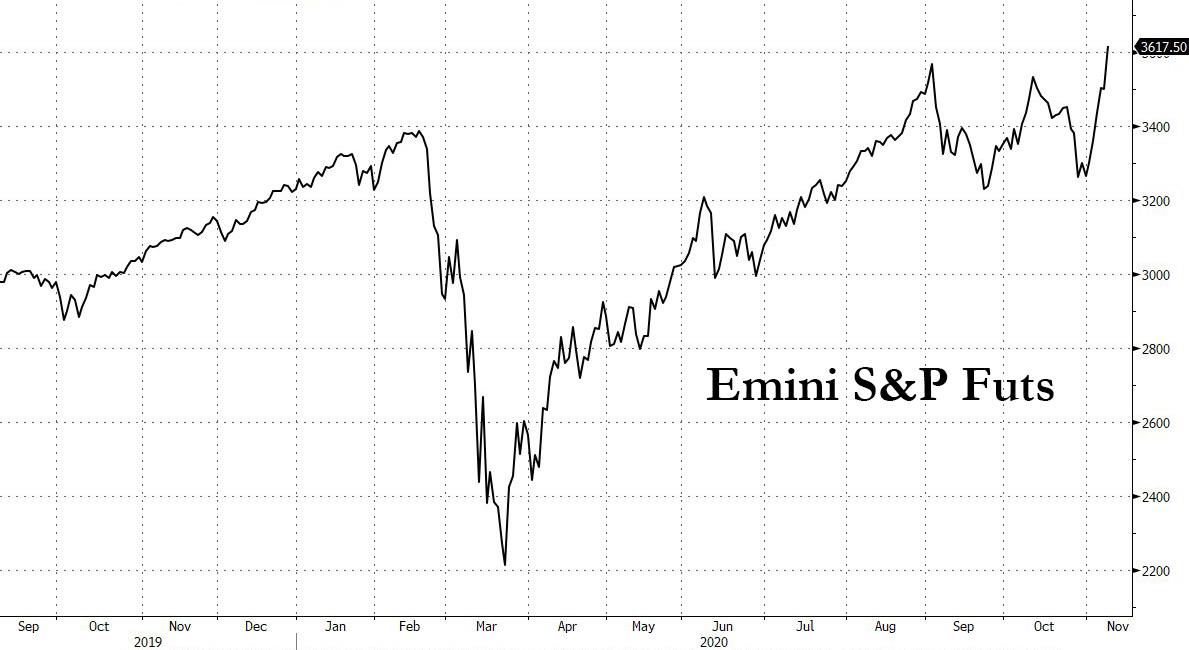 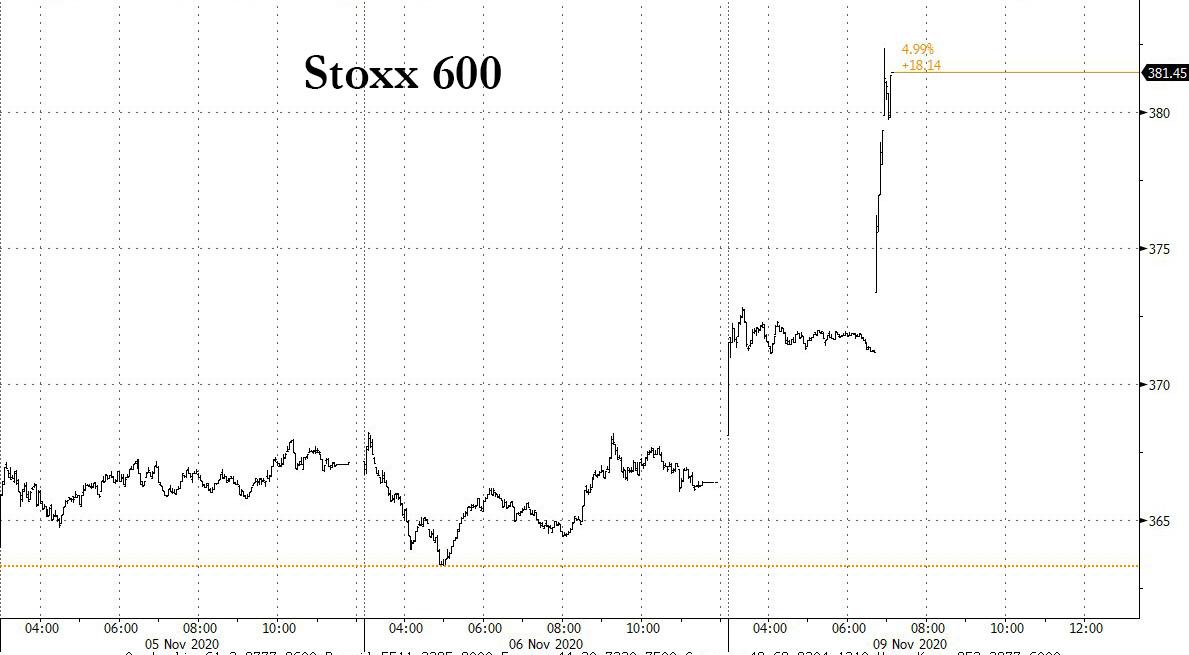 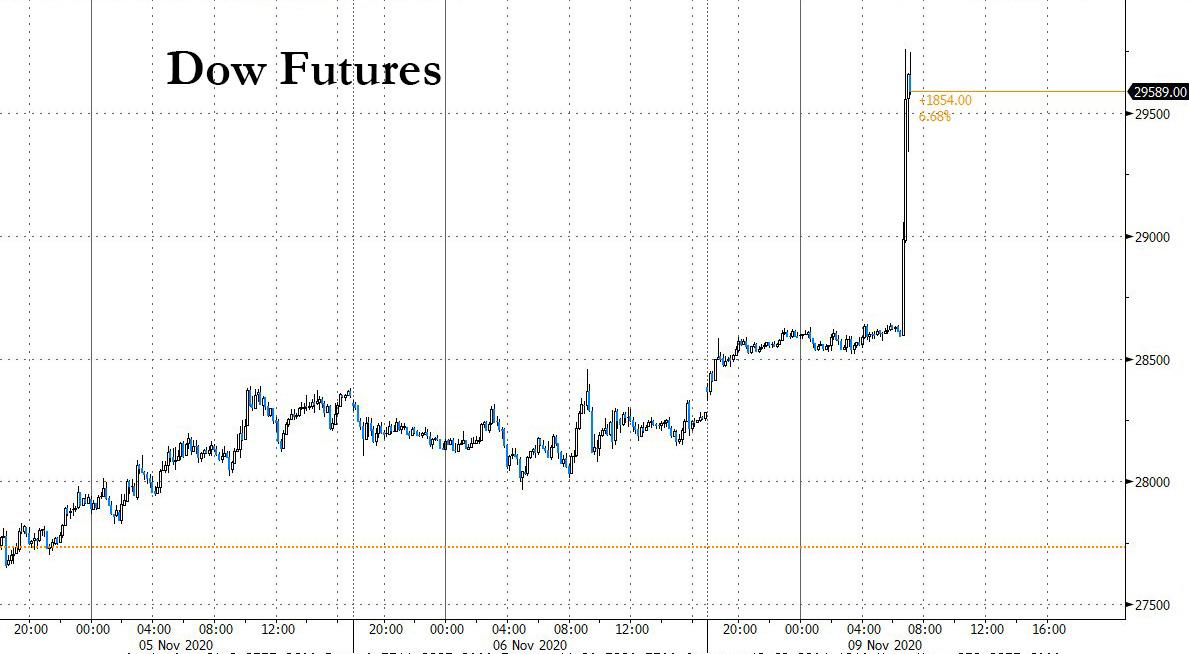 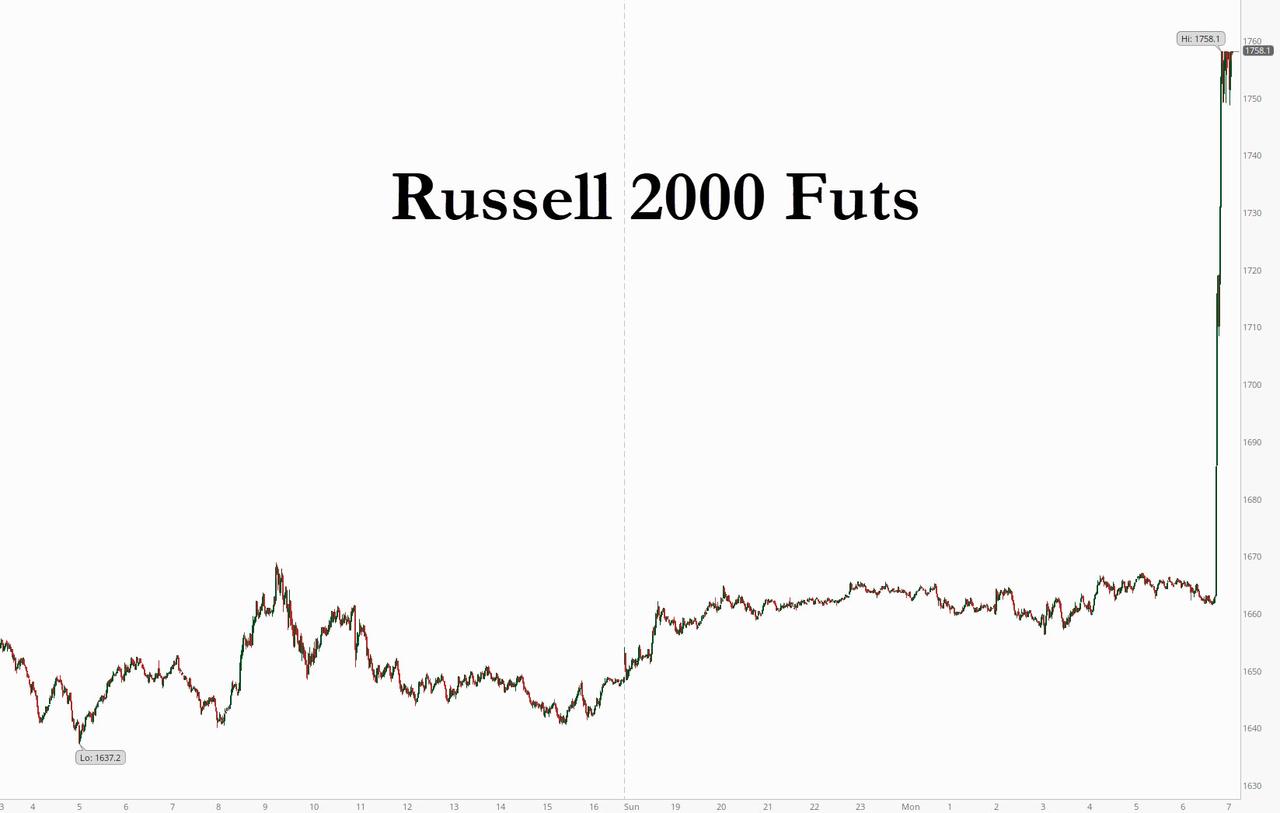 “For stocks, this is likely the best of both worlds,” said Joyce Chang, head of global research at JPMorgan Securities. “A GOP senate majority should ensure that Trump’s pro-business policies stay intact. Under Biden, additional tariffs that fueled the trade war are unlikely to materialize.”

Stocks that had struggled due to lock-down/restrictive measures related to the virus soared; cruise operators, airlines, hotels, amusement park/movie theater operators and casinos were among the early session’s top “lock- down” performers.

Airline stocks surged, with the Stoxx 600 Travel & Leisure Index up as much as 7%, the most intraday since May 26, with the index reaching the highest since Match 9; British Airways parent IAG jumped 25%, cruise operator Carnival surged 18%, Ryanair gained 18% and hotel company Accor jumps 12%. U.S. airlines also jumped premarket, with American Airlines up 15% and Delta up 12%.

Catering companies like Sodexo and Compass, travel booking software firm Amadeus also surging, as are airports concession operators like WH Smith, SSP Group and Autogrill. Aerospace stocks are also surging, with Airbus, Safran and Rolls-Royce among the biggest gainers in the industrial goods index, along with airports operators like ADP and Aena.

Banks had been hard hit this year by pandemic-induced economic woes and low interest rates; the KBW Bank Index (BKX) has tumbled 31% versus an 8.6% gain for the S&P 500. Card stocks gained as well, with Visa and Mastercard adding more than 5%, and American Express and Capital One up more than 8%.

At the same time, stay at home stocks such as Peloton, Netflix and Zoom sank: PTON is down 5.2%, NFLX -3.3% and ZM -5%; Nautilus, Etsy and Wayfair also fell. The news also hammered companies that had boomed amid an insatiable need for Covid-19 tests: QDEL sank 14% as QGEN tumbled 12%; among smaller companies trading on lighter volumer were GNMK -6.1%, FLDM -2.8%.

The news also helped crude oil explode up to 8% higher… 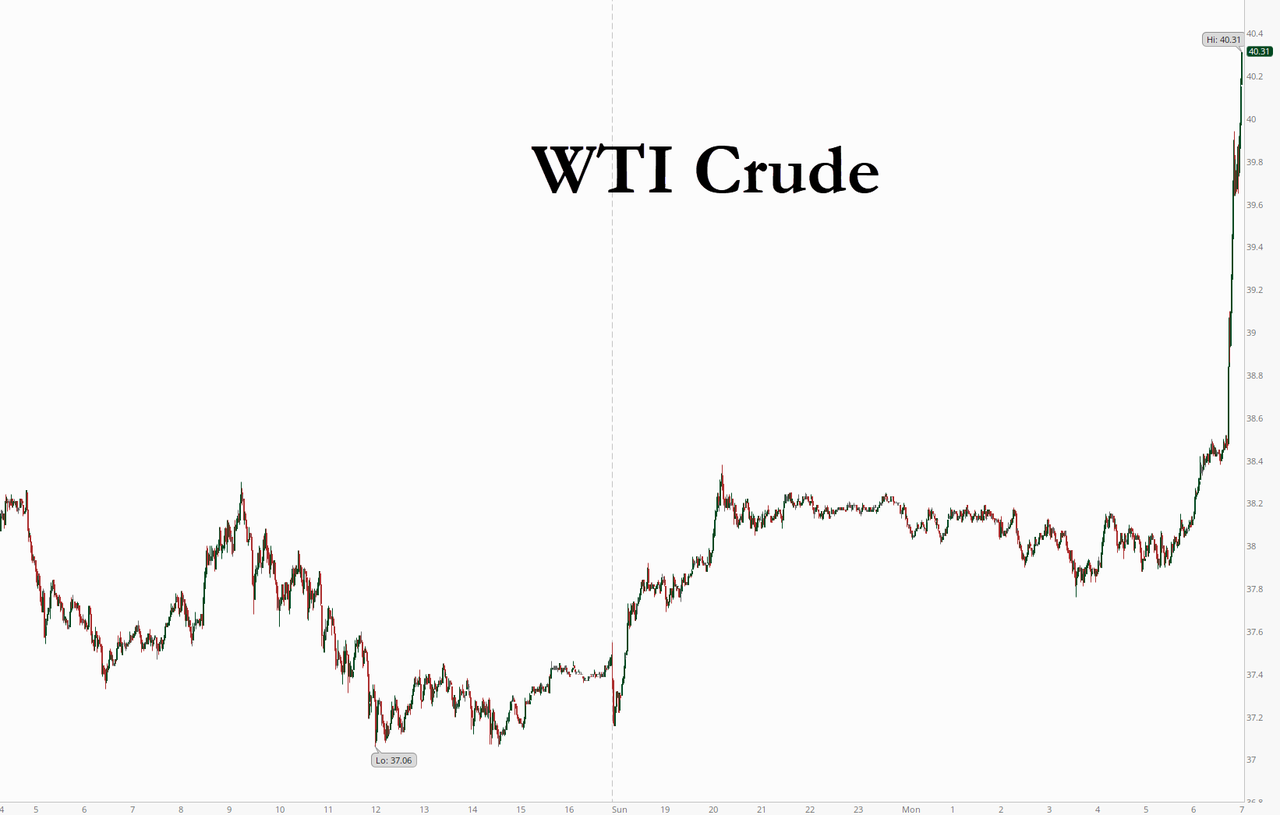 … while such flight to safety traders as Treasury yields reversed amid expectations the reflation trade may finally be unleashed should covid be vanquished, and the 10Y yield soared as much as 14bps higher, rising to a session high of 0.9338% before easing back to 0.91%. Supply is also a factor as this week’s Treasury refunding begins with 3-year note sale at 1pm ET and a heavy IG corporate issuance slate is expected. 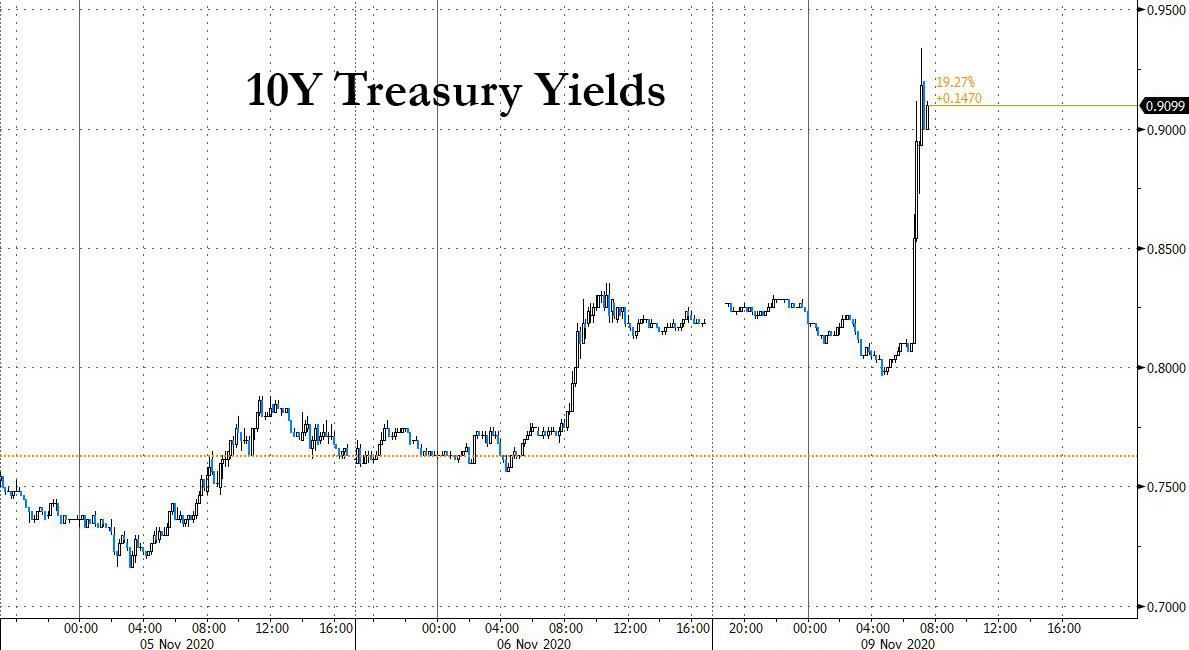 Others safety traders such as gold and silver, were also hammered, tumbling over 2%.

In FX, the USD was little changed overall, though the underlying bias was negative according to BMO’s Stephen Gallo; in BBDXY terms the currency is down 2.4% in Q4 to-date. Within the FX space, the bulk of the weakness in the USD was shouldered by the currencies of commodity exporters (NZD, AUD, NOK, CAD, IDR and MXN). Risk assets fed off the strength in commodity prices and weaker USD (Hang Seng +1.2%, Stoxx-50 +6.0%), and the rally gained momentum after reports of an effective vaccine circulated.

Elsewhere in FX, the TRY rallied 6.1% vs the USD after leadership changes were announced for Turkey’s MoF and central bank over the weekend. The majority of FX investors probably expect CBRT to tighten its monetary policy stance further to rein in credit growth, although that is clearly at odds with Erdogan’s ideological preference for rate cuts. Despite that sentiment, the yield on the local currency 2-year government debt dropped (probably because financial markets had already been applying the tightening for the central bank). The next scheduled rate decision is on November 19.

Aside for the Pfizer covid vaccine, here are some of the other top overnight news from Bloomberg:

Canada partners with CHINA to develop a vaccine for coronavirus, which was spread by China