Just in case anyone missed the unprecedented market moves on Monday, when news of a 90% effective Pfizer vaccine sparked a once in a lifetime 15-sigma momentum-to-value rotation, and which saw non-tech/growth/momentum stocks explode higher pushing the S&P to fresh all time highs, and allowed the CEO of Pfizer to quietly dump over 60% of his stock holdings under the guise of a 10(b)-5 sale, it was a busy day. So busy, in fact, that according to Deutsche Bank’s chief executive officer for the Americas, Christiana Riley, “the past couple of days since Pfizer’s groundbreaking announcement and what we all hope will be an inflection point in this pandemic, the street has seen quite tremendous volumes as a consequence of that.”

Speaking at Bloomberg’s Future of Finance virtual event on Wednesday, Riley added that “all of us who have been in this industry long enough know that a couple of days do not make a quarter. But there was always going to be a degree of election bounce-back certainly here in U.S. markets – we’ve seen that since the clarity that came over the weekend – and the Pfizer announcement has just accelerated that trend.”

While there was indeed a surge in total NYSE volume, nowhere was the Monday spike more obvious than in Nasdaq stock volumes, which surpassed the March crash lows and approached the records hit in June when an all-out tech euphoria was unleashed among both retail and institutional investors. 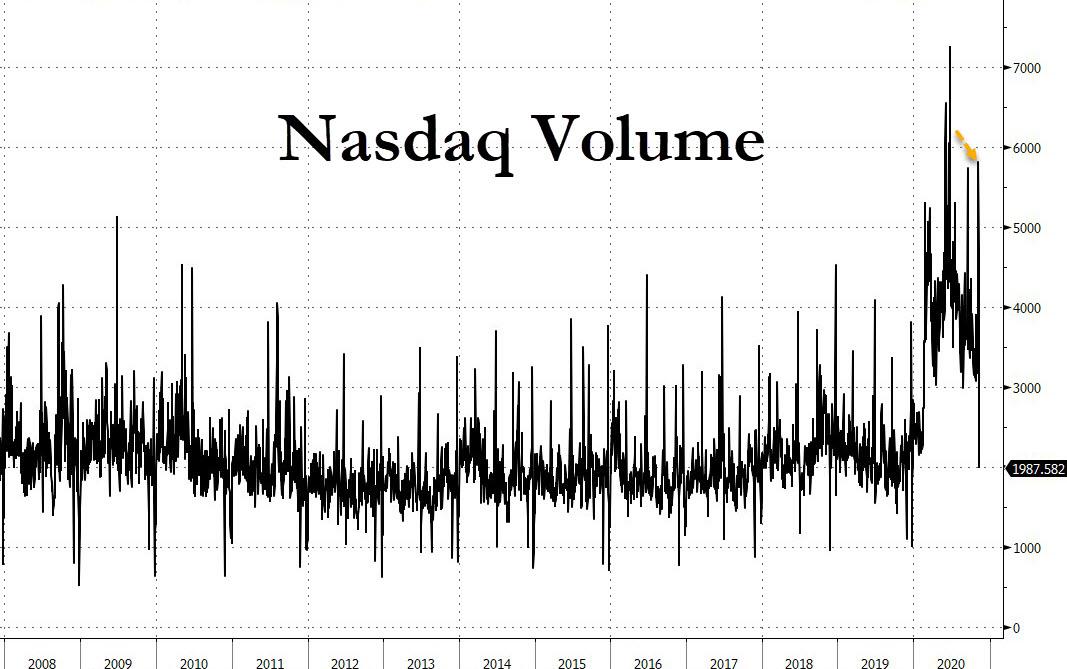 The biggest winners of this volume surge were the banks themselves, as they suggest that the trading boom that has lifted Deutsche Bank earnings for the past year has also continued in the final months of the year, giving CEO Christian Sewing some more breathing room as he presses ahead with the bank’s most far-reaching overhaul in decades. As a reminder, in Q3, DB’s revenue from fixed income trading jumped 47% last quarter, beating all but one of the large Wall Street peers. It now appears that stocks will be the source of revenue upside in the fourth quarter.

There was more good news for Deutsche Bank’s long-suffering traders who have gone for years with little or no bonuses: the largest German lender is among securities firms to note that it will reward the traders who delivered that bumper performance, with CFO James von Moltke saying his firm has been accruing funds to pay commensurate bonuses. Riley reaffirmed that statement on Wednesday, saying the lender will reward staff for that performance “in a way that is consistent with competitive market practices.”

Meanwhile, those hoping that the VIX will promptly slump to its low teens historical average may be disappointed: according to Credit Suisse CEO Thomas Gottstein volatility will be “the name of the game” for the next few months on concerns around how quickly a virus vaccine will be ready, as well as the knock-on effect on the economy and corporate health.

The flipside is that the current volatility is merely pulling from the future as investors reposition ahead of future events. According to Bloomberg, Riley cautioned that it’s unlikely trading conditions next year will improve even further, after the market volatility seen in the first half of 2020, although the environment should remain “benevolent” for trading.

Besides the recent volume surge, Bloomberg reports that other topics discussed at the Future of Finance conference included risks and opportunities arising from pandemic. On Tuesday, Robert Kaplan, head of the Federal Reserve in Dallas, told the event that the resurgence of Covid-19 jeopardizes the next two quarters for the U.S. economy, which is poised to bounce back. Swiss Re’s CEO Christian Mumenthaler cautioned that it’s almost a certain that there are also going to be issues with the massive amount of sovereign debt that has been issued during the crisis.