What Is John Brennan So Worried About?

What Is John Brennan So Worried About?

Authored by Ray McGovern via ConsortiumNews.com,

Former CIA Director John Brennan is apparently so worried that Donald Trump might release certain classified intelligence that he suggested this week that Vice President Mike Pence and the cabinet remove Trump via the 25th amendment. 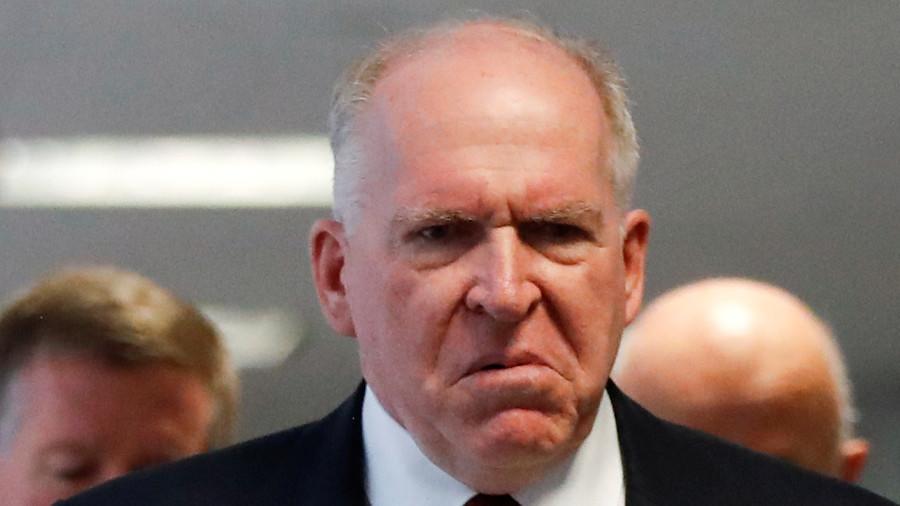 Brennan appeared this week on both CNN and MSNBC to spread alarm about what Trump might do as he continues to contest the election results and appoints new people at Defense, NSA (and possibly CIA) who may do his bidding.

Brennan warned on CNN that it was “very, very worrisome” that Trump “is just very unpredictable now … like a cornered cat — tiger. And he’s going to lash out.”

Brennan told MSNBC he was worried that Trump has called for the “wholesale declassification of intelligence in order to further his own political interests.”

Whom would he lash out at and what classified documents might Brennan be referring to?

The CIA’s point man at The Washington Post, David Ignatius, has provided the answer:

“President Trump’s senior military and intelligence officials have been warning him strongly against declassifying information about Russia that his advisers say would compromise sensitive collection methods and anger key allies.

An intense battle over this issue has raged within the administration in the days before and after the Nov. 3 presidential election. Trump and his allies want the information public because they believe it would rebut claims that Russian President Vladimir Putin supported Trump in 2016. That may sound like ancient history, but for Trump it remains ground zero — the moment when his political problems began.”

Protecting “sources and methods” is a red herring. They can be redacted from a classified document. It’s the content of these files that has Brennan extremely nervous as they might reveal Brennan’s role in the Russiagate scandal. Of course, Brennan invoked the old trope of “national security” when it appears it’s his own security he’s worried about.

This new standoff over releasing Russia intel is the perfect bookend. When Trump challenged intel officials on their Russia claims in January 2017, Chuck Schumer warned that the national security state could easily retaliate against the elected president. Who will prevail? pic.twitter.com/NjMPcOIHH0

As we noted at a similar juncture in March 2018 (in “Former CIA Chief Brennan Running Scared”), Brennan’s foremost worry — then, as now — was that Trump was about to expose him to the disgrace that befell ex-FBI Deputy Director Andrew McCabe for malfeasance in connection with Russiagate.

The president had just fired McCabe for repeatedly lying, and Brennan had good reason to worry. That was before the true extent of the roles McCabe, his boss, former FBI Director James Comey, and Brennan played in the WMD-style fabrication of “Russiagate” had became more fully understood.

Brennan landed on his MSNBC perch as a paid commentator on Feb. 2, 2018 and was riding high with adulation from the likes of former UN Ambassador Samantha Power, who publicly warned Trump that it is “not a good idea to piss off John Brennan.”

Even back then, however, storm clouds were gathering. House Intelligence Committee Chairman Devin Nunes (R-CA), who knew much more than he revealed, was warning of legal consequences for Russiagate conspirators.

Referring to the weavers and tailors of Russiagate, Nunes told reporter Sharyl Attkisson on Feb. 18, 2018:

“If they need to be put on trial, we will put them on trial. The reason Congress exists is to oversee these agencies that we created.”

Dismissive of such warnings, Brennan accused Trump on May 17, 2018 of “moral turpitude” and predicted, with an alliterative flourish, that he would end up “as a disgraced demagogue in the dustbin of history.”

As the Russiagate saga has unfolded, however, it has become abundantly clear that there is more than enough moral turpitude to go around. As discussed below, there may be a reasonable hope that documentary evidence — chapter and verse — about Russiagate turpitude will see the light of day if Trump summons the backbone to get unimpeachable evidence into the open.

In my view, this is what seems to have Brennan on tenterhooks.

What Else Did Esper Refuse to Do?

This is the big question. In the CNN interview, Brennan was not artful enough to disguise what seems to be his major worry. Right after complaining that complacent observers are “missing what is a very, very worrisome development,” the ex-CIA chief added:

“And I think it’s quite apparent from reporting that Mark Esper has stood up to Donald Trump repeatedly. Who knows what else has he [‘terminated’ Secretary of Defense Esper] refused to do?”

(For one thing, according to Politico, Esper clashed with Trump over pulling U.S. troops out of Afghanistan.)

“Who knows what [freshly appointed Acting Secretary of Defense] Chris Miller is going to do if Donald Trump does give some kind of order that really is counter to what I think our national security interests need to be?”

There are abundant — and disquieting (to Brennan) — clues to this, in the events unfolding over the past several days.

For starters, there is the role Ignatius (as close to Brennan as a Siamese twin) played in setting an unusually transparent table to interpret Brennan’s CNN interview the morning after — curiously, without mentioning the interview itself.

(Yes, this is the same David Ignatius who reported on the leaked, late-Dec. 2016 telephone conversation between Russian Ambassador Sergey Kislyak and Gen. Michael Flynn, which was used to trap Flynn and, if possible, put him in prison. After all, Flynn was a major threat. He knew — or would have been able to find out — where most of the Russiagate bodies were buried. It was imperative that he be removed quickly from his position as Trump’s national security adviser.)

Nunes: Out From Under the Bus?

After being “thrown under the bus” by Trump more than once in his attempts to expose the crimes of Russiagate, Nunes may now harbor some hope that his patience and loyalty will be rewarded after all. In October Trump ordered Russiagate documents declassified and nothing happened. The next few weeks will tell. The omens are better than before.

Not only will Ellis be general counsel at NSA, reportedly over the objections of Gen. Nakasone, but Kashyap Patel, a longtime Russiagate skeptic and former Nunes aide on the House Intelligence Committee, is replacing Esper’s chief of staff at the Pentagon. Patel is said to already have a “very close” working relationship with Miller, the acting defense secretary.  (And rumors persist that Haspel’s ouster is next.)

In addition, former National Security Council official Ezra Cohen-Watnick has been named acting undersecretary of defense for intelligence. Cohen-Watnick not only reaps close ties to Nunes; he was also a top aide to Flynn during the latter’s abbreviated tenure as national security adviser.

Have these folks been appointed to help start a new war? They seem better placed to try to finish an old one — namely, Russiagate. They would certainly be well placed to execute a Trump order to declassify and release R-gate-related documents that have been Waiting for Godot.

This sends shivers up the spines of those with much to fear from such disclosures. At the same time, the formidable ability of the bureaucracy to resist is well known to all concerned.

Esper Slow-Walked Out the Door

It appears Esper may have been slow-walking a White House request to release information gathered and stored by the National Security Agency, which could document what Trump calls the “hoax” of Russiagate, and the criminal behavior of its perpetrators — including the role prime mover Brennan may have had.

It may be hard to believe, but the NSA intercepts and stores every electronic communication. All Trump has to do is to have newly appointed acting Pentagon chief Miller order Gen. Nakasone to release materials spelling out chapter and verse on the Russiagate operations orchestrated by Brennan, Comey, and ex-National Intelligence Director James Clapper. Nakasone reports to the secretary of defense.

Don’t be misled; virtually all of it can be released with ZERO danger to intelligence “sources and methods.” But release won’t happen if Trump continues to just whine to Fox News, or he “authorizes” release without follow-up (he’s already done that — to no effect).

What Brennan seems to fear is that it might dawn on Trump that he lost the election and has little time left to act. As a lame-duck he might want to go out with a flourish: revenge against the intelligence establishment that undermined him for four years with its Russiagate fable.

Trump might awake one day to find that someone has scrawled on his mirror, “Hey, I thought YOU were the president.” At that point, there would be an outside chance he might act like one, and Brennan and co-conspirators might find themselves going the way of McCabe.

In such circumstances, establishment media can be expected to make a Herculean effort to suppress the (highly embarrassing, including for the media) truth about Russiagate.

It certainly did an amazingly effective job suppressing “Huntergate.” Odds are they could succeed this time around too.

Like those huge banks ten years ago, Russiagate may be too-big-to-fail. But, at least, the documentary evidence would be out there for those who “can handle the truth” — and for future historians with some courage. This is not about the election, which has been decided. But about putting on the record intelligence interference in the last election and subsequent administration, so that future agencies might think twice about doing it again.

By finally ordering the release of such documents, sanitized in those few cases in which it might be necessary, Trump may enable anyone opened minded about Russiagate to be informed in a documented way, about what actually happened during that long-lingering, dark chapter of our recent history.

And, in the process, Russiagaters might be able to overcome their instinctual reluctance to accept the pernicious nature of the National Security State. And that would be for the best.

Man, Economy, and State: The Economics of Freedom