Authored by Robert Spencer via PJMedia.com,

Every right-thinking person, that is, everyone who thinks Jake Tapper and Chuck Todd and Adam Schiff are as honest as the day is long and always tell the God’s honest truth, knows that the Orange Man is very, very bad.

The whole world, or at least the morally superior part, seems to have decided that a president who puts his own nation first and sees to its safety and prosperity is outrageous beyond every measure, and must be destroyed. But no one knows just how bad Donald Trump is as thoroughly as London’s Mayor Sadiq Khan. 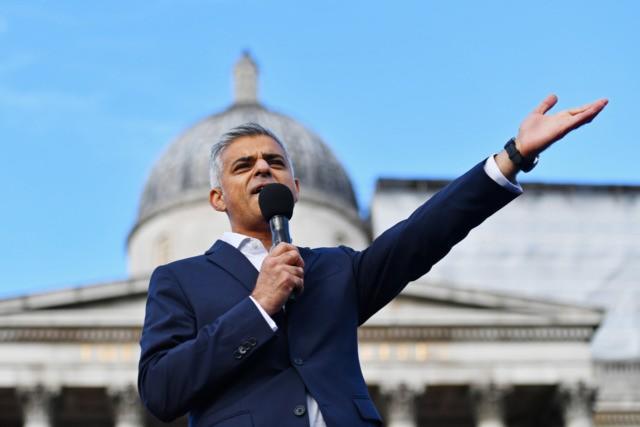 Poor Khan has had an extremely rough four years. If you thought Trump wouldn’t have time after spending his days caging children, insulting the military, and being racist to torment the hapless mayor, think again. You may be able to get a note excusing you from the next Truth and Reconciliation Commission meeting if you take some time now to understand how Sadiq Khan has suffered, and suffered terribly, because that country across the Atlantic had the temerity to elect a president who was not a socialist internationalist.

According to LBC, Khan claimed that he has been “singled out” by Trump. How had evil Trump singled out Khan? Did he spy upon him before he took office? Did he try to frame him for crimes that would get him impeached and removed as mayor? No, nothing like that.

Trump’s grave sin, Khan said, was that he put the diminutive Leftist mayor under an “astonishingly ugly spotlight.” Trump zeroed in on Khan, the mayor claimed, “for no other reason than being Muslim.”

Yes, that’s right: Despite being Mayor of London and one of the most prominent and lionized politicians in Britain, Sadiq Khan still sees himself as a victim of “Islamophobia.”

Eyes no doubt glistening, he lamented:

“Being a Muslim ain’t easy, it isn’t easy…it’s never been harder to be a Muslim than the last four years.”

It has never been harder to be a Muslim than from 2016 until now! Never! In 1,400 years of Islam, Muslims have never had it so bad! See how powerful Trump is? When Muslims were expelled from Spain in 1492, they didn’t have it this bad. When their siege of Vienna was broken in 1683, they didn’t suffer as they do now at the hands of Trump. Not even when the State of Israel was founded, which supporters of the Palestinian jihad will tell you was the worst day in human history! No, for Khan it has never been worse than it is now, and not because of China’s persecution of the Uighurs, or because of atrocities supposedly committed against the Palestinians or Rohingyas, but solely because of Trump. For now, Khan said, the world had “for the first time the leader of the free world, a mainstream politician perpetuating a view that Islam and the West are incompatible.”

In reality, there were plenty of politicians saying that during the halcyon days of the old Ottoman Empire, and right up until the Left overwhelmed American academia in the 1960s, but it is unlikely that either Khan or his Leftist supporters have much of a historical memory. Trump, Khan claimed, had perpetuated a view that “all of us must be bad, or must be terrorist because of the actions of a very small minority.”

“Let’s be frank,” he concluded.

“The reason I was singled out was not because of any other reason,” he said, “than my faith.” And now Muslims worldwide are “carrying an additional weight,” all because of Trump.

As is so very characteristic of Islamic supremacists the world over, Khan started this feud, and is now playing the victim and claiming that Trump is motivated by “Islamophobia.”

The Trump/Khan conflict began in January 2017, when Khan attacked Trump’s travel ban on several countries that could not or would not provide adequate information about the people wishing to enter. Khan said:

“I am quite clear, this ban is cruel, this ban is shameful, while this ban is in place we should not be rolling out the red carpet for President Trump.”

“President Trump can’t silence me….We stand in solidarity with all those who are discriminated against because of their nationality, their faith or their background.”

After a jihad massacre in London in June 2017, Trump tweeted:

“At least 7 dead and 48 wounded in terror attack, and Mayor of London says there is ‘no reason to be alarmed!’”

“@SadiqKhan, who by all accounts has done a terrible job as Mayor of London, has been foolishly ‘nasty’ to the visiting President of the United States, by far the most important ally of the United Kingdom. He is a stone cold loser who should focus on crime in London, not me.”

So it looks as if Trump has criticized Khan for being blasé after a jihad massacre, for being personally unkind to him, and for neglecting London’s skyrocketing crime rate.

What in that is singling Khan out for being a Muslim? Nothing, of course. The same charges can be made against others, and Trump has made them; he has many times criticized New York Mayor Bill de Blasio, who is not a Muslim (as far as anyone knows, anyway), for being soft on crime.

So on what does Khan base his claim that Trump only criticized him because he is a Muslim? Nothing except the always-pertinent fact that it will play well with his Leftist base – on both sides of the Atlantic.

Meanwhile In China, Beijing Is Losing Control Of The Economy