As Joe Biden continues to claiming victory (something he said he wouldn’t do until the election was independently certified), various legal challenges brought by President Trump, the GOP, and allegedly disenfranchised voters are working their way through the courts. 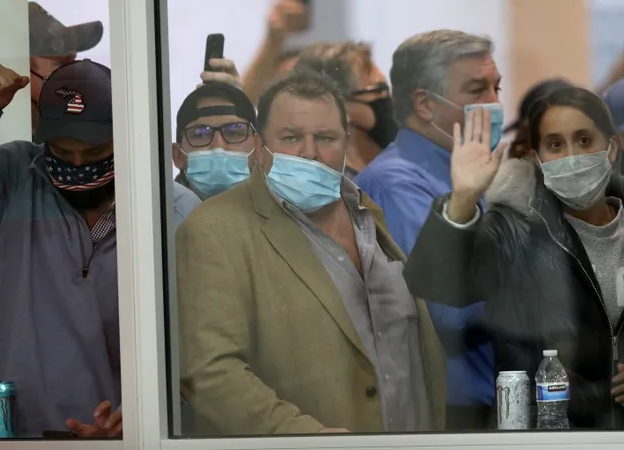 And unless the courts intervene – up to and including the US Supreme Court – the clock is running out on Trump’s ability to claim victory in light of alleged fraud, as several states move to certify their results.

While Georgia is set to certify its election results on Friday, Nevada, Michigan and Pennsylvania are expected to follow next week. Arizona, meanwhile, has until Nov. 30, and Wisconsin until Dec. 1, according to Bloomberg.

States make their election results official through a certification after what’s known as a canvass to account for every ballot cast and to confirm that every valid vote was counted, according to the U.S. Election Assistance Commission. Procedures and deadlines for certifying votes vary by state.

Certified totals can change if a state allows recounts after certification, which Georgia, Michigan and Nevada do, or if there is a challenge to the election. But certification amounts to a declaration of a winner, and the winning candidate will assume office unless a court intervenes, said Michael Morley, an assistant law professor at Florida State University who’s worked on election emergencies and post-election litigation. –Bloomberg

“This is going to be a series of dominoes that fall sort of ineluctably toward the conclusion that we already know is true, which is that Biden is the winner of these states and is the president-elect,” said NYU law professor, Richard Pildes, adding: “This will be the formal legal step that cements that.”

As JPMorgan’s Michael Cembalest notes, however, the US Supreme Court could hear appeals on state challenges, “such as late-arriving absentee ballots in PA (too few to change the outcome); complaints on transparency of vote counting (judicial relief could entail recounting certain counties); illegal acceptance of certain votes (votes in question too small to change the results); and complaints that the voting process suffered from pervasive irregularity and fraud (most of these claims have been rejected by lower courts over the last 2 weeks).”

Cembalest concludes that “a LOT of very unorthodox things have to happen for Trump to be re-elected,” adding that “Based on the uncertified vote results, Trump would have to reverse or impede results in three states to prevent Biden from reaching 270 electoral votes.“

That said, he’s not ruling anything out.

In Pennsylvania, the Trump campaign continues to seek to block the certification of the results in the state over alleged unfair voting practices in which Democratic-leaning areas were given greater opportunities to correct mistakes on their ballots. A federal suit seeks to challenge over 680,000 mail-in ballots which were counted without proper oversight from GOP poll watchers – who say they weren’t allowed within 20 feet of election counters.

Trump’s campaign has also accused election officials of violating a judge’s order to allow meaningful access to watchers – at minimum six feet – as long as they adhered to measures implemented to reduce the spread of covid-19.

Another challenge seeks to disqualify ballots received after election day – which would affect an estimated 10,000 votes, or not enough to overcome Biden’s more than 70,000 vote lead over President Trump.

In Michigan, where Biden is ahead by approximately 150,000 votes, the Trump campaign is seeking to block certification of results in Wayne County – where the Board of Canvassers just overcame a major controversy in which two Republican members of the four-person body refused to certify the results of the election, only to reverse course three hours later and bend the knee.

State elections officials will meet on November 23 to confirm the final election results.

Nevada – also projected to go to Biden by a margin of more than 30,000 votes – has been served with a lawsuit as well, asking that Trump be named the winner or that the results be void with no winner declared and certified. Trump’s team claims that “fraud and abuse renders the purported results of the Nevada election illegitimate,” and alleges that 15,000 people living out of state illegally voted.

In Georgia, a lawsuit was filed in Chatham County alleging ballot processing issues, while GOP party Chairman David Shafer tweeted that observers saw a woman “mix over 50 ballots into the stack of uncounted absentee ballots.” The lawsuit was dismissed on November 5.

And in Arizona, the Trump campaign filed a lawsuit on November 7 claiming that legal votes were rejected based on poll watcher affidavits claiming that they had issues with voting machines.

In the US, Rich States Spend Less on Welfare