At the start of November, in a moment of brutal honesty, JPMorgan’s quant strategist Nikolas Panigirtzoglou made a remarkable admission: there is nothing better for stocks than another economic catastrophe such as a new round of lockdowns. Why? Because more economic pain means even more Fed intervention (especially in a world where the Congress is hopelessly deadlocked on additional fiscal stimulus). Here is what Panigirtzoglou said:

Although it has had a negative impact in the short term, the reemergence of lockdowns and resultant growth weakness could bolster the above equity upside over the medium to longer term via inducing more QE and thus more liquidity creation. 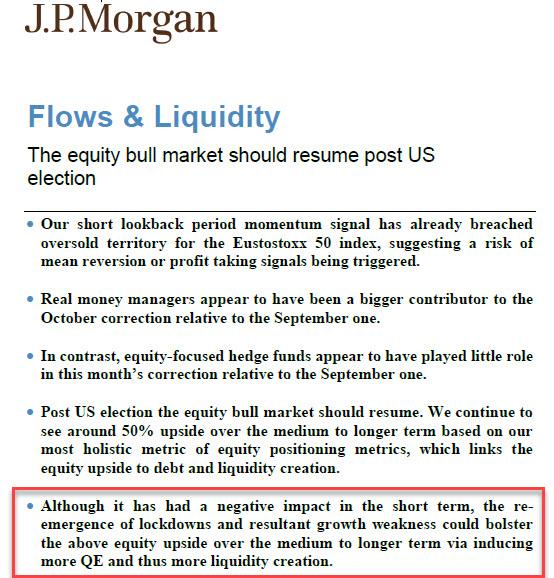 This was a stunning admission because JPM effectively said what “tinfoil blogs” had been saying for over a decade: that the worse the economy gets, the better it is for risk assets as the Fed has no choice but to step in and keep bailing out bulls as the alternative – a full-blown market crash – is simply an inconceivable scenario for a country where private sector financial assets now represent a record 6.2x the GDP… 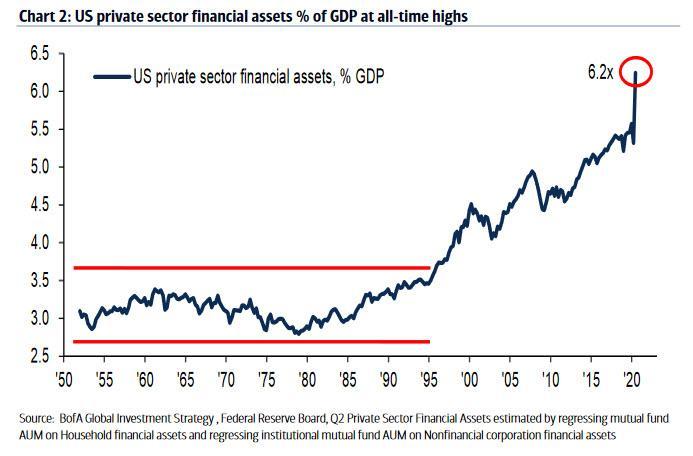 … and where household net worth which is mostly in financial assets, has never been larger. 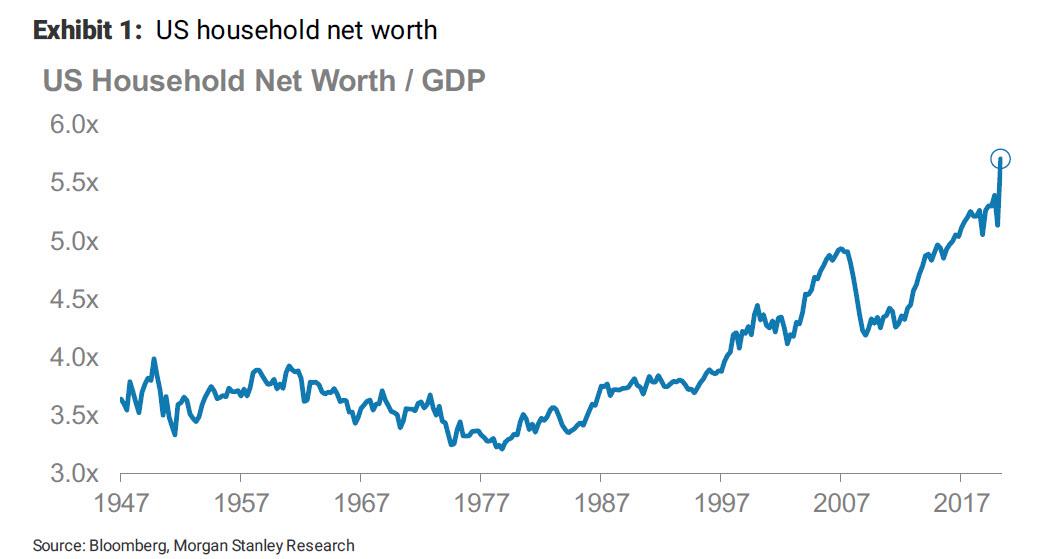 The second, if just as important admission in the note was that we now (and for the past decade) live in a world where liquidity (and thus flows) is all that matters.

The reason we bring this is up is because in a follow up note, the JPM strategist now predicts that the gradual decline in uncertainty from the very high levels seen before the US election as we the coming year – facilitated by vaccine developments which should enhance a trend of declining uncertainty into 2021 – will amplify equity and risk markets going forward by reducing the need for precautionary savings over time. This, Panigirtzoglou argues, “means that a greater portion of the liquidity that has been injected so far as a function of QE and credit creation, would be deployed into higher yielding non-cash assets such as equities into next year.”

In short, while a substantial portion of the trillions in liquidity injected by the Fed in 2020 ended up being stuck in various inert cash-equivalents, most notably money market funds which surged by over $ 1 trillion in the aftermath of the pandemic shutdowns…

… as conditions normalize and as more liquidity is diverted out of cash equivalents into risk assets, there will be an avalanche effect as the combination of excess liquidity and upside momentum combines to create a surge higher in stock prices.

At the core of JPM’s thesis is that returning confidence (and normalcy) will unlock savings, which is why Panigirtzoglou writing that he believes “that recent vaccine announcements would help overall equity and risk markets over the medium to longer term via another channel, i.e. via enhancing a trend of declining uncertainty following the US election. A gradual decline in uncertainty from the very high levels seen before the US election would amplify equity and risk markets going forward by reducing the need for precautionary savings over time.“

Uncertainty is important as it makes economic agents holding more cash during periods of elevated risk perception, for precautionary reasons. We proxy uncertainty via the monthly uncertainty indices constructed by Baker, Bloom and Davis for the US. To a large extent, this uncertainty index quantifies newspaper coverage of policy-related economic uncertainty as well as disagreement among economic forecasters. This US uncertainty proxy is shown in Figure 1 along with its smoothed version. The uncertainty proxy has been rising into the third quarter of the year ahead of the US election. It appears to have declined modestly in recent months from the record high levels of last summer, but it stood at still very elevated levels in October ahead of the US election, implying that there is plenty of room for uncertainty to subside from here. 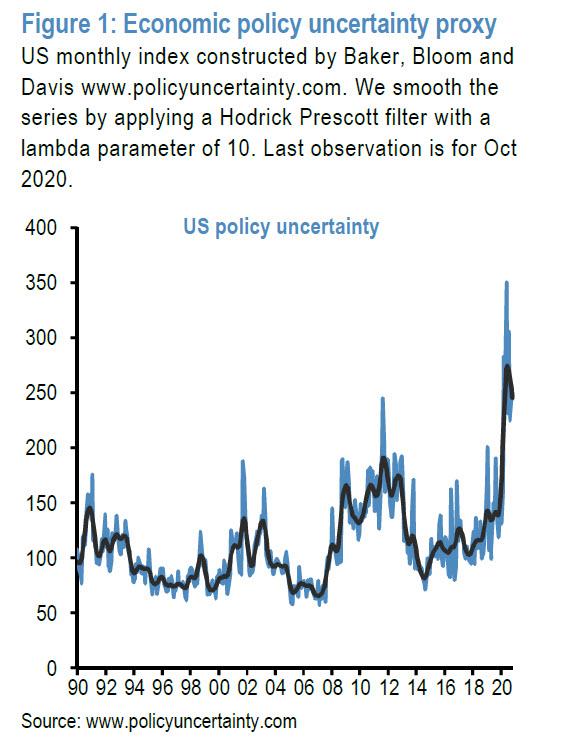 This means that a greater portion of the liquidity that has been injected so far as a function of QE and credit creation, would be deployed into non-cash assets in the future, in other words, much of the liquidity already injected will simply be retasked to chase risk assets instead of stay in cash. This is how the JPM strategist puts it: 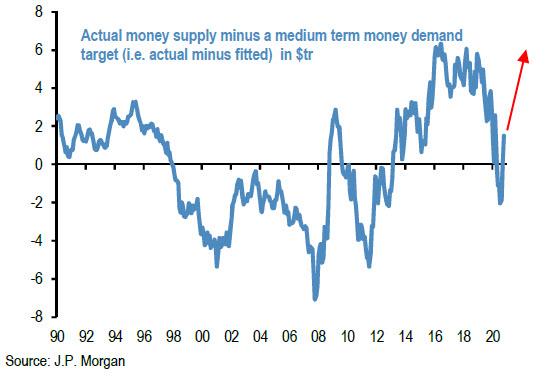 Going forward, further normalization in the uncertainty proxy would push the excess liquidity measure in Figure 2 to even higher levels. Assuming a full normalization by 2021, our excess liquidity measure would rise to levels that are even higher than the previous historical highs seen between the beginning of 2016 and the beginning of 2018. The implication, as mentioned above, would be that a greater portion of the liquidity that has been injected so far as a function of QE and credit creation, would be deployed into higher yielding assets such as equities in the future.

What does all of this mean for the market in practical terms? Putting it all together, JPM projects the fair value for stocks based on two scenarios, both shown in Figure 4. The first, in the red dotted line, assumes that markets looked through the near-term rise in macroeconomic volatility. The second, in the black dotted line, takes on board the sharp rise in real GDP volatility, and projects a gradual normalization to pre-virus outbreak levels by end-2021. 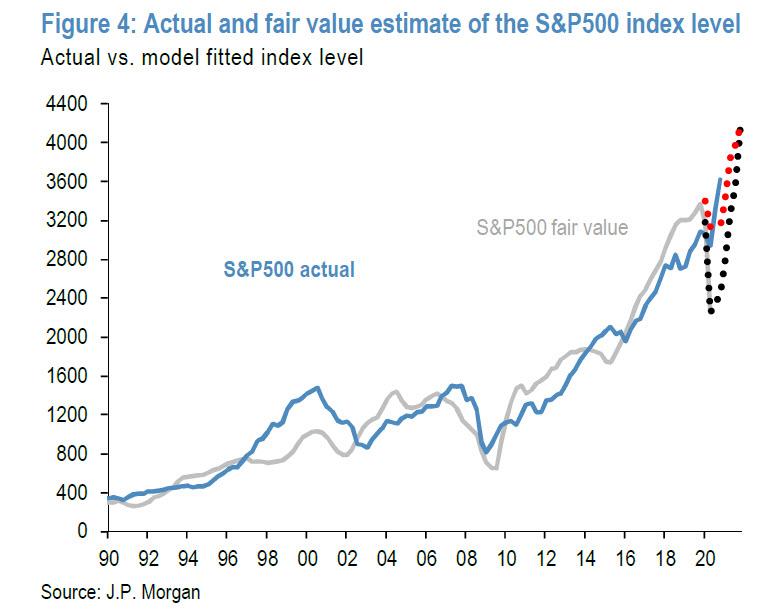 In the red line, “the initial gradual decline stems from the fact that the four-quarter sum of consensus earnings forecasts initially dominates up to 3Q20, after which a pickup in the 5y recursive growth estimate more than offsets it, just as the four quarter rolling sum begins to pick up again in 2021. The red line bottoms out at around 3150, while the sharp rise in the discount rate in the black line sees it bottom out at around 1990 before recovering, and both lines converge close to 4190 by end-2021.

As JPM concludes, with actual value of the S&P having risen to around 3600 at the time of writing compared to the red line suggesting an end-2020 fair value of just over 3172, “this effectively means that the market has looked through the short-term spike in uncertainty as well as much of the hit to 2020 earnings, but still has another 15% of upside by end-2021.”

All of this ignores the likelihood of another major monetary stimulus which as we explained earlier is likely to take place in two steps: first with the Fed expanding the maturity of QE in its December FOMC, followed by expanding QE in early 2021 to counter the next covid “crisis” just so Powell has enough dry powder to monetize the roughly $3 trillion in net issuance on deck in 2021.

In short, JPM’s estimate of a 4,190 year-end S&P target in 2021 could prove to be far too conservative if a few trillion more in liquidity are injected by the Federal Reserve.

As War Danger Mounts In The Arctic, Peace Hinges On Revival Of The Wallace Doctrine

We must all demand a sensible end to the coronavirus lockdowns, or we will lose our liberties forever