Horseman: “The Bond Bull And Commodity Bear Markets Are Over” – Here’s How To Trade It

Horseman: “The Bond Bull And Commodity Bear Markets Are Over” – Here’s How To Trade It

After a remarkable start to the year, surging almost 30% when all other funds were tumbling, the fund formerly known as Horseman Global until its recent purchase by CIO Russell Clark (hence its current name Russell Clark Investment Management), has had a turbulent seven months, at one point in the summer even forcing the famously bearish hedge fund to throw in the towel on his well-known bearish/deflationary position and to not only turn net long for the first time in a decade (as we reported last month), but to shift its global outlook from deflationary to inflationary.

Unfortunately for Clark, just as he pulled a 180, going long such cyclical sectors as banks, mining and metals, and industrials while going aggressively short industrials (a bet on higher rates), a deflationary wave spurned by surging covid cacses hammered stocks and in October his fund lost 7.3%, bringing what was once a gain of as much as 25% YTD to just above 0%… 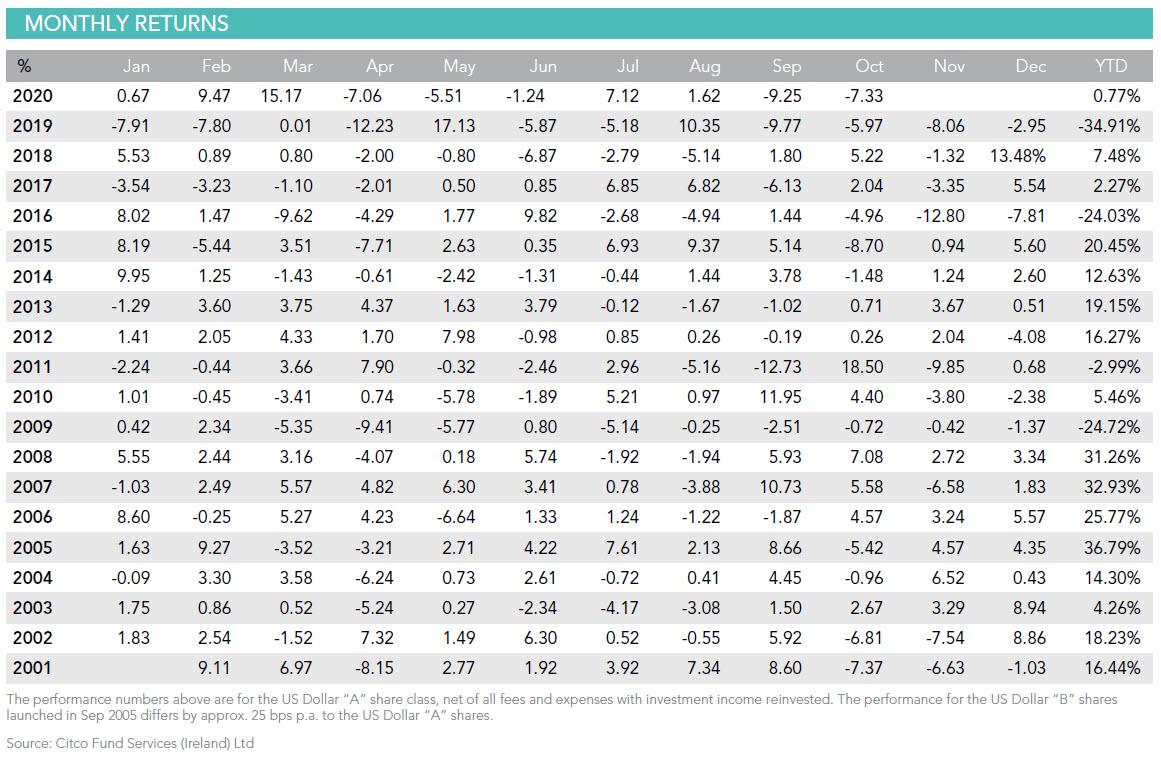 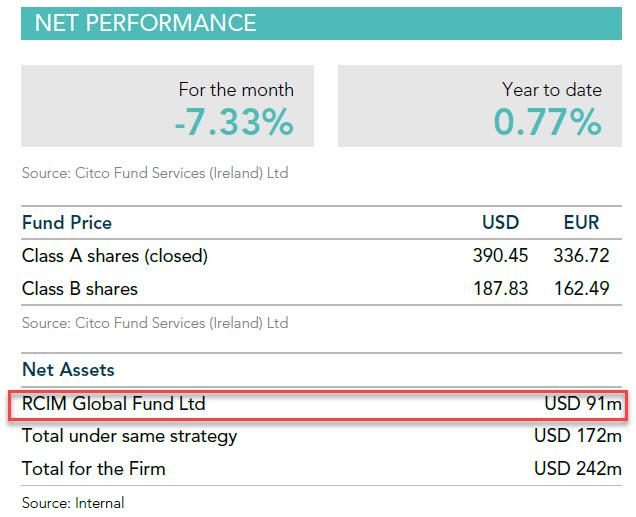 And since for most funds, $100MM is the critical minimum capital that most hedge funds need to remain viable, Clark may soon be facing extinction unless he can quickly turn around his performance, which for years suffered from fighting the Fed head on.

Which is not to say that Clark doesn’t think he can do it.

In his latest letter, the hedge fund manager blames his recent volatility on the market’s wild swings from a deflationary to a reflationary mode and back again (incidentally he could have just bought bitcoin which goes up no matter which of the two themes is prevalent and already be up more than 160% for the year), and in his latest slow the flood of redemption requests, Clark writes that one thing he is good at “is working out when a bull market is over” (referring to the nearly 4 decade-long bull market in bonds), a skill which the formerly bearish hedge funder thinks will allow him to position appropriately for what comes next (which reminds us that David Einhorn did a similar thing last month when he said that the tech bubble burst when the Nasdaq cracked on Sept 2, only for the S&P to soar to new all time highs just weeks later).

This is how Clark lays out his reflationary thesis, starting with the hayday of the carry trade era in the early 2000s:

All bull markets (and bear markets for that matter) have some combination of currency, bond and commodity cycle that is working for or against them. In my first decade, which started at the top of the dot com bubble, the overwhelming trade was the tightening of commodity markets, with the standout trade being iron ore moving from USD 20 a tonne to USD 200 a tonne. The commodity bull market, and a dovish Federal Reserve allowed “carry trading” – a very popular hedge fund trade – to become extremely lucrative, and the hedge fund industry prospered. 2000 to 2010 was the decade of the hedge fund. Other carry trades such as convergence trades in Europe (short bund long peripheral bonds) and in the US (long mortgage backed securities, short treasuries) also took off, until 2008 marked the beginning of the end.

Things changed after the financial crisis, but especially after the 2010 DOJ crackdown on expert networks (thanks in no small part to this website), which also ended the “information arbitrage” (read legal insider trading) popularized by Steve Cohen and countless spin off funds. To Clark, the defining feature of the last decade was not just the chronic inability of hedge funds to generate alpha (as they no longer had access to inside information presented as “expert networking”) but the collapse of the carry trade and the advent of the capital arbitrage trade, i.e., issuing debt to buyback stock, something we have spent hundreds of articles discussing over the past decade:

The 2010s has really been the reversal of the 2000s carry trade. In fact, for many years we ran what could be called a negative spread trade – long bonds, and short emerging markets and cyclicals that worked fantastically well based off the oversupply of commodity markets. But if the 2000s was about the carry trade, then 2010s were about the capital arbitrage trade. Capital arbitrage is basically issuing debt to buy equity, either through M&A or buybacks to create “value”. Apple has been very successful at issuing large amounts of bonds to buy back shares. With 40-year Apple bonds only yielding 2.8%, this is a no brainer trade. The investment firms best placed to benefit from such arbitrage has been private equity, and without question the 2010s have belonged to the private equity industry.

Which brings us to today when, as hinted above, Clark calls an end to the “cap arb” trade. It is here also that the formerly bearish investor explains why he shed his bearish bias, pointing to the Fed’s helicopter money which “essentially fixed yields to allow governments to spend as much as they want in order to maintain economic growth.” This took any fundamentally-based bearish trades off the table – for the simple reason that there is no longer anything to be bearish about when the Fed controls the bond market – and “the upshot of this is that” Clark no no longer has to worry about private sector shenanigans: “all I need to do is focus on government bond yields.”

Covid-19 and the response to it by Western central banks have made calling the top in this “capital arbitrage trade” much easier. Previously, I would be looking at government bond yields, and wondering how much corporate bond spreads could widen, particularly if problems in clearinghouses and autocallables came to the fore. When they did come to the fore in March, the Federal Reserve essentially lashed corporate debt yields to treasury yields. It also essentially fixed yields to allow governments to spend as much as they want in order to maintain economic growth. The upshot of this is that I no longer need to worry about private sector shenanigans (of which there is plenty), all I need to do is focus on government bond yields.

Which brings us to the punchline, and why after being a devout deflationist, Clark now sees inflation as inevitable and perhaps imminent: “I am bearish government bonds. As stated above, markets decided October was deflationary.” And yet, not everything traded deflationary in October: “commodity markets with the exception of oil were marking inflation. Many commodities were up, some significantly. US corn, Chinese corn, crude palm oil, natural gas, natural rubber, the CRB Raw Industrial Index, Chinese pork, Brazilian rice to name a few. Even the US oil market looks to be tightening rapidly.”

Additionally, and as we noted yesterday when we showed the record disconnect between US and Chinese 10Y yields… 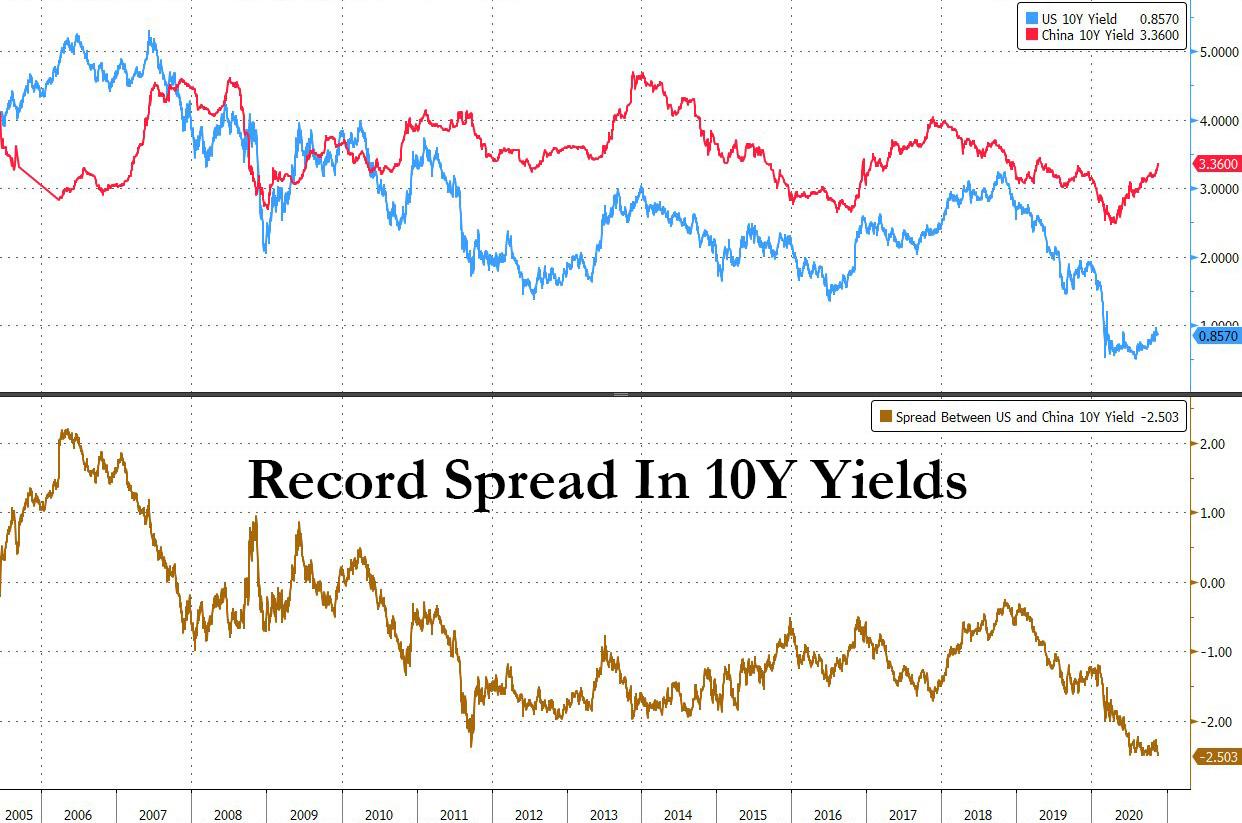 … Clark writes that Chinese bonds have also gone their own way this year, with rising interest rates: “Why buy a 40 year Apple bond, when a Chinese 2 year bond offers the same yield in a potentially appreciating currency?”

There is another big change the former “Horseman” points out:

While the answer is self-explanatory (the liquidity is not going into the broader economy but is merely serving to backstop risk prices), Clark derives two conclusions:

Incidentally, Clark is not the only one who believes the commodity bear market is over. In his latest Bear Traps report, Larry McDonald quotes a hedge fund manager who makes an interesting point:

The Fed could be in a tricky spot when they meet in December. The pressure to ease is significant given increased cases/mitigation measures, especially as fiscal impasse continues. However, financial conditions have never been easier. 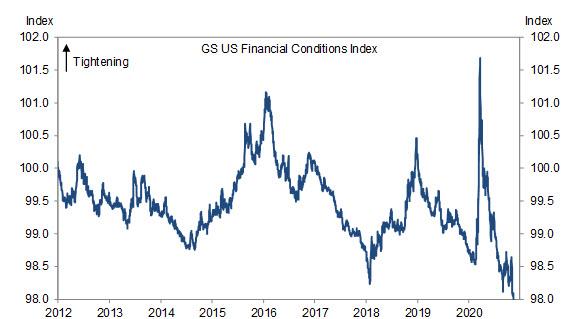 It’s a problem central banks at ELB face post-market stabilization, how to be countercyclical. This month, US CCCs (junk of the junk) are outperforming everything in credit, Goldman FCIs on multi-year lows (easy financial conditions), NYSE stocks % above the 200-day ma at 82% (the 2016 – 2019 high was 75%!). Market participants don’t fear the downside. shorts are gone, options hedging not happening much, the sentiment is bullish, hedge funds have the most net exposure in 5 years. If there’s one thing the market teaches over and over, is it’s better to fade the crowd than to chase it. We are near term cautious, bullish (commodities, EM) for 2021.

Clark admits that for now it is unclear what the immediate implications of these two “markets” being over are, noting that it is unlikely that we get another decade like 2010 of carry trades “given yields are so low everywhere, that could be a problem.” That said, he is confident that this “capital arbitrage” trade looks to have very poor risk reward from here.

For that reason, Clark is now focusing his shorts on companies that have benefited from low bond yields and low commodity prices – utilities, private equity and infrastructure assets. To those one could also add growth and momentum stocks, which as we showed yesterday, have a record high duration, making them extremely vulnerable to rising rates. 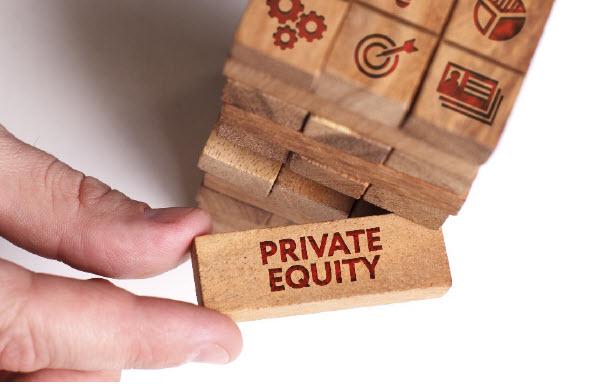 Clark then muses some more on this topic in his Sector Allocation section:

According to Deloitte, Private Equity assets have grown from less than USD 2 trillion in 2010, to over USD 4.5 trillion by 2019. Private Equity has many benefits over public funds. Leverage can be applied to companies, and short term losses can be tolerated while a firm builds market share. Private Equity managers can also choose when to sell assets. Over the decade, secondary buyouts, that is when a portfolio company owned by private equity is sold to another private equity buyer has increased from USD134bn in 2009 to USD600bn in 2019.

One huge tailwind for private equity has been falling corporate bond yields. During the financial crisis, high yield debt yielded 18%. As of today, that yield is 4.9%, close to the lowest on record. Corporate debt to GDP has also reached a record share of US GDP at 55% in Q2 2020, well in excess of levels seen in 1991, 2000 and 2007. A change in the interest rate environment would likely be negative for the private equity industry.

And while all that may be correct, and both listed hedge funds and the PE industry in general is facing the all too real danger of rising rates, at this point when every single redemption request matters a far more important question for Clark is what happens to one specific unlisted hedge fund namely his own, unless he manages a “home run” month in the very near future.

Let Slip the Dogs of Secession

In 30 States, A Computer System Known To Be Defective Is Tallying Votes