Earlier this week we reported that with month-end fast approaching, banks are starting to publish their estimates of what upcoming pension rebalancings will mean for stock and bond flows.

The first such forecast came from Goldman Sachs, whose month-end pension rebalancing published on Wednesday estimated that a net $36BN of equities to sell following a month of substantial outperformance of stocks vs bonds. Notably, according to Goldman, this is the fourth largest sell estimate on record going back to 2000, and ranks in the 96th percentile among all buy and sell estimates in absolute dollar-value.

Well, not to be outdone, JPMorgan which has accumulated a track record of estimating rebalancing flows (even if at times it means one JPM quant’s estimates facing off against another), writes that according to its own calculations, the $7 trillion universe of balanced mutual funds is on pace for a far greater month and quarter-end selling spree than the one estimates by Goldman… greater as much as 10x.

To answer this question, the JPMorgan strategist look at the four key multi-asset investors that have either fixed allocation targets or tend to exhibit strong mean reversion in their asset allocation. These are – in addition to the defined benefit pension plans previously highlighted by Goldman – also mutual funds, such as 60:40 funds, the Norwegian sovereign/oil fund, i.e., The Norges Bank, and lastly the Japanese government pension plan, GPIF.

Balanced mutual funds including 60:40 funds, a close to $7tr AUM universe globally, tend to rebalance relatively more quickly on a monthly basis or so.

Assuming that this universe of balanced mutual funds which tend to maintain a 60/40 equity/bond split, were fully rebalanced at the end of October, and by taking into account the MTD performance of global equities and bonds which has seen stocks drastically outperforming fixed-income by 10.45% (S&P total-return 10.50%, 10yr total-return 0.05%), JPM estimate around -$160bn of  negative equity rebalancing flow by balanced mutual funds globally into the end of November.

The bank caveats that this estimate could be wildly different if its assumption that balance funds were, in fact, not fully rebalanced at the end of October. And, as it further notes, its equity beta shown in the chart below, suggests that this was likely not true and that US balanced mutual funds in particular have been rather underweight equities during October. 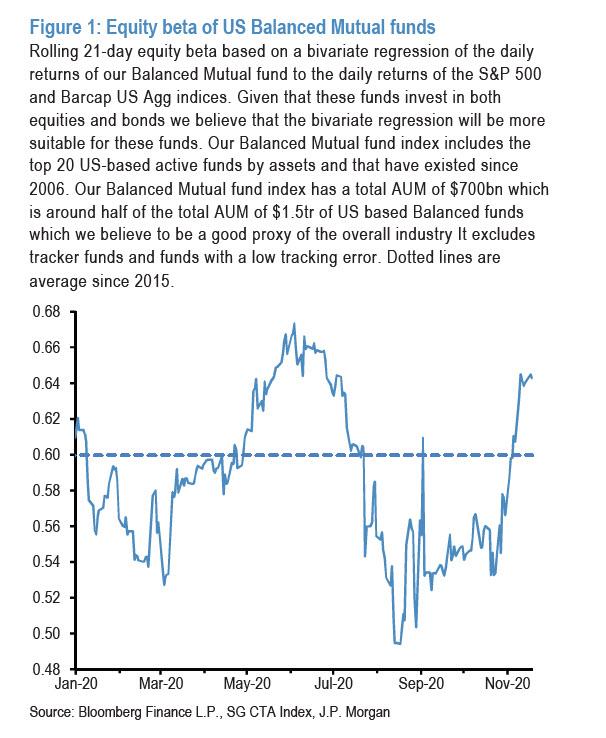 According to Panigirtzoglou, “if the picture in Figure 1 is a true reflection of how balanced mutual funds have been positioned in recent weeks, then there would be some vulnerability in equity markets in the near term from balanced mutual funds having to sell equities to revert to their 60:40 equity:bond target allocation, either by the end of November or by the end of December at the latest.”

There’s more: according to JPM, the equity rebalancing flow is likely to also be an issue into year or quarter-end, i.e. the end of December, especially if equity markets continue to grind higher into December. This is because of likely negative pending rebalancing by entities that tend to rebalance on a quarterly basis, such as US defined benefit pension plans, Norges Bank, i.e. the Norwegian  oil fund, and the Japanese government pension plan, GPIF. Some estimates:

In all, Panigirtzoglou echoes Goldman’s month/quarter end year-end selling concerns, writing that he sees “some vulnerability in equity markets in the near term from balanced mutual funds, a $7tr universe, having to sell around $160bn of equities globally to revert to their target 60:40 allocation either by the end of November or by the end of December at the latest.”

And should the market rally continue into December, JPM concludes that it could give rise to an additional $150bn of forced equity selling into the end of December – a total of more than $300 billion – by pension fund entities that tend to rebalance on a quarterly basis.

In short: nearly a trillion dollars worth of stock selling by rebalancing funds may be on deck, begging the question: when will traders start frontrunning this potentially massive wall of money, which could hit just as market liquidity is at record lows… 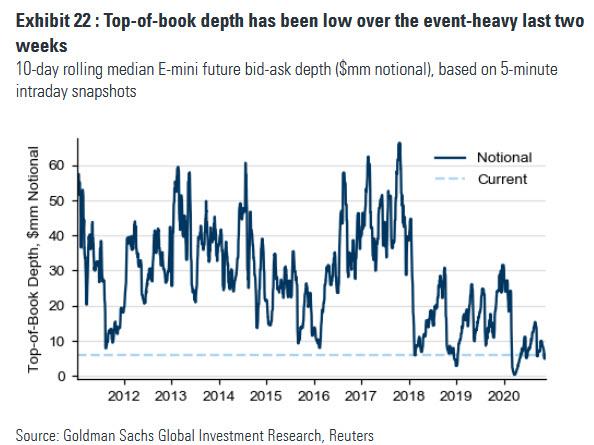 … resulting in an outsized move to the downside if this culminates in a liquidation frenzy.

Smith: Will Biden’s Presidency Be A Catalyst For Secession… Or Worse?

Why a Contested Election Would Be a Good Thing

Home Equity Theft: How a Man’s Home Was Seized Over $8.41 in Unpaid Taxes