This, in a nutshell, is how Wall Street works: just two months after JPMorgan was fined a record $1 billion criminal monetary penalty (to make sure not a single banker would end up going to prison) for rigging the gold and silver markets, Reuters reported that JPM – having clearly “learned” the tools of the gold rigging trade, has earned a record $1 billion in revenue so far in 2020 from trading, storing and financing precious metals, vastly outperforming rival banks.

The math simplified: JPM has spent $1 billion over the lifetime of its precious metals rigging, ensuring it has full indemnity from future manipulation claims, allowing allow it to make $1 billion in revenue in just one year. Truly a remarkable IRR, and proving yet again, that on Wall Street crime not only pays, but has a 1-+year payback period.

While the coronavirus has created a bonanza for investment banks dealing in gold, silver and other precious metals by triggering massive investor purchases and rupturing the normal workings of the market, JPMorgan has dominated, growing its share of the market according to Reuters. 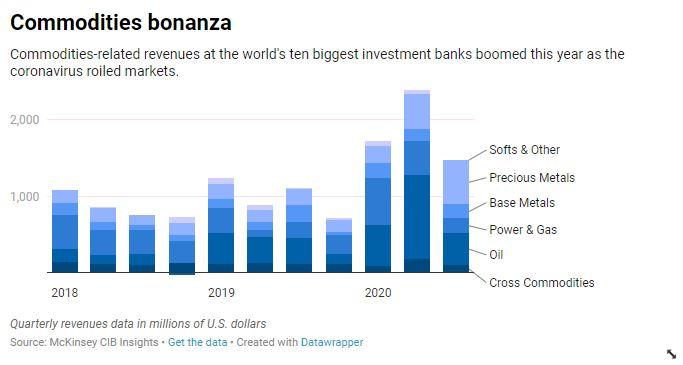 Revenue generated by the largest US commercial bank by mid-November accounts for at least half of the $1.7 billion to $2 billion that consultancy McKinsey estimates the top 10 investment banks combined will make this year from precious metals, mostly gold.

And while Blythe Masters is now long gone (and oddly enough was never even once questioned for her involvement in JPM’s massive gold manipulation scandal despite being in charge of JPM commodities during the peak of JPM’s market rigging), JPMorgan’s commodities division is on track to bring in more than $1.5 billion this year and could challenge Goldman Sachs for the title of top earner.

But surely after having been caught so many times rigging gold, JPMorgan is no longer manipulating the commodity market: after all all the regulators are watching it. Well, you decide: individual investment banks have rarely made more than $1 billion in commodities in recent years, and none has ever before earned more than around $600 million in precious metals in a single year, said George Kuznetsov at McKinsey CIB Insights. Yet for JPMorgan, it was child’s play.

Why? Because as some have said, the $1 billion criminal manipulation penalty was really a bribe for the CFTC and SEC to look away next time.

#JPMorgan Pays A KICK BACK aka BRIBE To #CFTC For Manipulation of #Gold & #Silver Prices.

We Have ZERO Regulation. @maxkeiser Remember This?
Think They Stopped?

Of course, in addition to manipulating the market, JPM also has unprecedented visibility into its every player. The bank sits at the heart of the global bullion market, and its activities span trading physical bars to derivatives, running vaults and clearing trades in London, the biggest trade hub.

Naturally, to avoid the spotlight, JPM had a ready narrative. As Reuters writes, “driving profit has been the clamour for gold and silver from investors, mainly in Europe and North America, worried the coronavirus pandemic and money-printing by central banks could devalue other assets. These investors pushed gold prices to record highs above $2,000 an ounce earlier this year.”

To this add profits earned on the Comex futures exchange in New York, where supply issues earlier this year made it more lucrative for those with access to physical gold to trade precious metals. Gold custodian banks – such as JPMorgan – took advantage of opportunities on Comex and helped clients do the same, in some cases bailing out major ETFs and anecdotally, even one rather prominent central bank.

According to Comex data, show JPMorgan’s clients accounted for one-third of all trade in gold bars registered with the exchange in October, and more than two fifths in June. Like other big banks, JPMorgan was able to get and ship metal cheaply and in large quantities when other, smaller traders could not, sources said.

The revenue windfall will likely fade as trading on Comex reverts to normal patterns, but high gold prices and interest from investors mean this business will remain profitable. “2020 is going to be an outlier year,” said Kuznetsov at McKinsey, who clearly did not consider that the manipulation will only accelerate from here.

Bigness Is Badness: The Case for a National Divorce

The Aftermath – Surveying The Wreckage From Last Week’s Market-nado