Despite three consecutive Monday announcements of “potential vaccines,” an agreement by President Trump to allow the “Biden Transition” to begin, and a holiday-shortened trading week that left the “inmates in charge of the asylum,” the market hasn’t done much with it. As of Friday, the market is only about 1.62% higher than it was three months ago.

Unfortunately, as we will discuss in more detail momentarily, the surge in November, one of the largest monthly advances in history, consumed the entirety of the market’s oversold condition that existed before the election.

Furthermore, you have to wonder precisely how much “gas is left in the tank” when even “perma-bears” are now bullish.

Consequently, you will notice the previous peaks in perma-bull exuberance have coincided with short-term corrections.

Therefore, the question we should ask is “if everyone is in, who is left to buy?”

A Lack Of Buyers

As I have noted previously, one of the primary drivers, unsurprisingly, is the extremely easy “financial conditions” caused by low-interest rates, fiscal and monetary policies. Consequently, easy financial conditions have historically also come with a “price tag” attached. (Chart courtesy of Tavi Costa of Crescat Capital)

Furthermore, investors’ extreme bullishness, particularly post-election, has dragged buyers into the market. As David Larew of ThinkTankCharts notes, the National Associate Of Investment Managers is carrying above 100% exposure to stocks (leverage). Such levels of ownership have previously coincided with short- to intermediate-term corrections in the market. 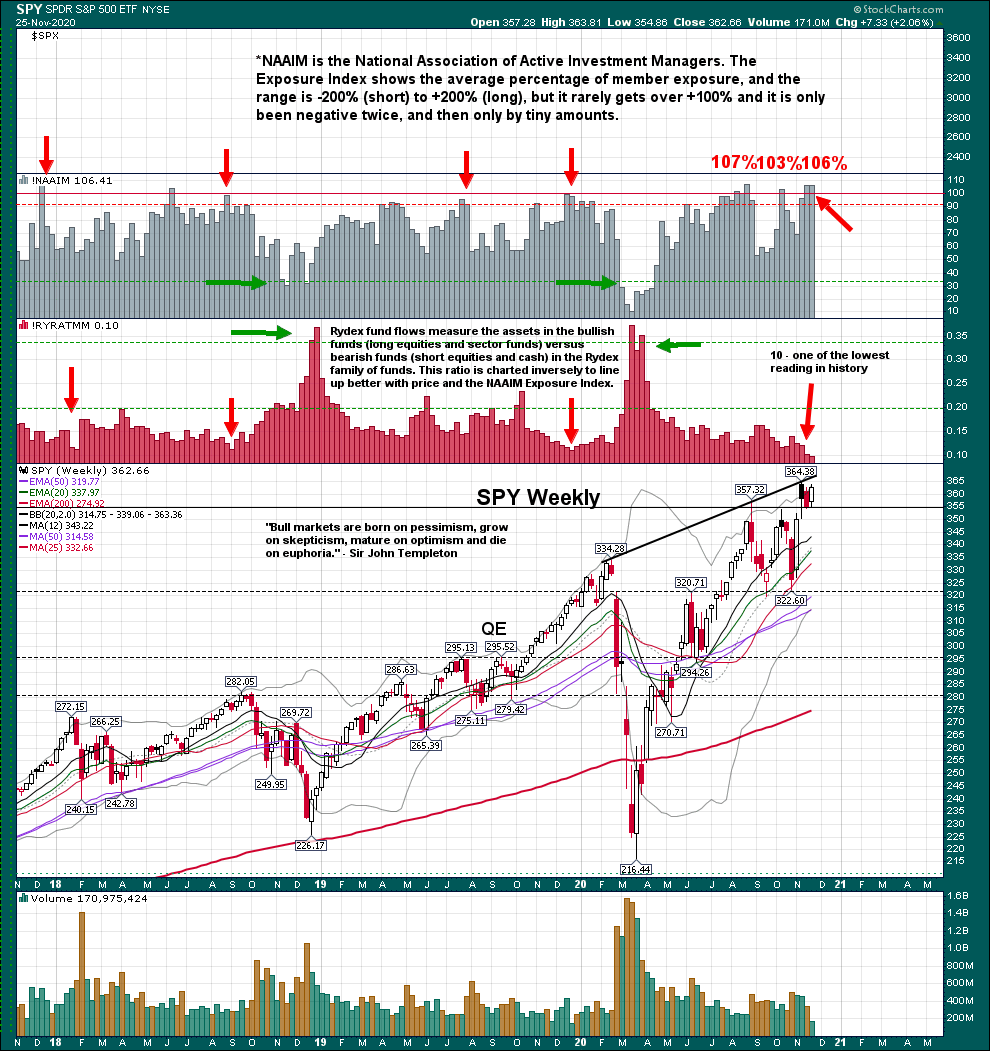 Correspondingly, the surge in buying has also pushed investors to give up hedging portfolios by buying “put options.” With the Put/Call ratio back to more extreme conditions, market corrections have generally been close by.

Lastly, the market’s monthly deviations from the 3-year moving average are pushing well into 3-standard deviation territory and trading more the 30% above its mean. Such deviations, as shown, have historically not worked out well for buyers.

The critical ingredient of a bullish advance is “confidence.”

Nothing Can Stop It?

The current consensus is with a vaccine coming and more stimulus, a surge in economic recovery will occur.

“When all experts agree, something else tends to happen.” – Bob Farrell

Previously, I discussed why it doesn’t take much of a catalyst to start a bout of “panic selling.” We quoted Doug Kass on a list of potential risks which few seem to be considering:

In a market where investors are throwing money into “SPAC’s,” or shell companies that will try and find something to invest in, the potential for a massive corporate fraud to develop is not that far “out of the box.”

Furthermore, when everyone is long equities and leveraged, it is an unexpected, exogenous event, which begins the rush for the exit.

Such is why you don’t wait for it to start raining to “build the ark.”

The idea of “building the ark” has continued to be our motto over the past week in our portfolios. Specifically, our primary focus is to adjust our allocations, capture profits, and protect capital when the “risk/reward” profile becomes unbalanced.

Therefore, given the ongoing extremes of the market, as discussed above, the imbalances suggest a more cautious approach to portfolios currently. As such, we continued reducing our equity exposure, adjusting our bond holdings, and raising our cash levels.

Earlier, I discussed in our “3-Minutes” video, the risk of selling pressure after the holiday as pension fund and institutional managers rebalance and mutual funds distribute capital gains.

As shown below, with fund managers carrying some of the lowest cash balances on record, we could see selling pressure to make distributions. 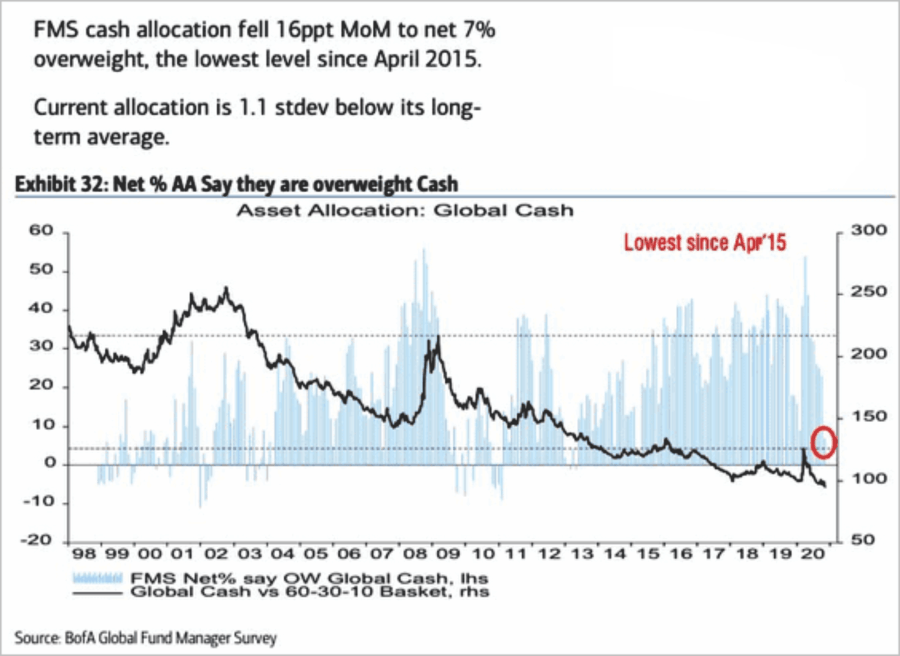 With the markets exceedingly exuberant on many fronts, caution is certainly warranted. With margin debt near peaks, stock prices at all-time highs, and “junk bond yields” near record lows, the bullish media continues to suggest there is no reason for concern.

Of course, such should not be a surprise.

At market peaks – “everyone’s in the pool.”

“The investor’s chief problem – and even his worst enemy – is likely to be himself.” – Benjamin Graham

In the “heat of the moment,” it is easy to get swept up into narratives as the “Fear Of Missing Out” overtakes our logical thought processes. As such, here are the 7-impossible trading rules to follow:

It seems like a simple thing to do, but the average investor sells their winners and keeps their losers, hoping they will eventually return to even.

3) This Time Is Never Different:

As much as our emotions and psychology always want to hope for the best – this time is never different. History may not repeat exactly, but it generally rhymes.

There is never a rush to invest. There is also NOTHING WRONG with sitting on cash until a real opportunity comes along. Being patient is an excellent way to keep yourself out of trouble.

5) Turn Off The Television:

The only thing you achieve by watching the television from one minute to the next is increasing your blood pressure.

6) Risk Is Not Equal To Your Return:

Risk only relates to the loss of capital incurred when an investment goes wrong. Invest conservatively and grow your money over time with the least amount of risk possible.

Why Bitcoin Is Soaring: Thank Trump And Trade War