Beige Book Darkens As 4 Of 12 District Sees “Little Or No Growth”, Optimism Wanes On New Lockdowns

Beige Book Darkens As 4 Of 12 District Sees “Little Or No Growth”, Optimism Wanes On New Lockdowns

While superficially the Fed’s latest Beige Book, which was based on data collected before Nov 20, toed the “modest recovery” party line with most of the Fed 12 district characterizing economic expansion as the trite “modest or moderate”, it certainly had a dark shadow as four districts described “little or no growth”, while five narratives noted that activity remained below pre-pandemic levels for at least some sectors.

Worse, Philadelphia and three of the four Midwestern Districts observed that activity began to slow in early November as COVID-19 cases surged. This deterioration, however, was offset by reports which indicated higher-than-average growth of manufacturing, distribution and logistics, homebuilding, and existing home sales, “although not without disruptions.”

Continuing the trend of pain in CRE, districts also reported “some deterioration of loan portfolios, particularly for commercial lending into the retail and leisure and hospitality sectors.” As a result, an increase in delinquencies in 2021 is more widely anticipated. And while most districts reported that firms’ outlooks remained positive, optimism has waned – many contacts cited concerns over the recent pandemic wave, mandated restrictions (recent and prospective), and the looming expiration dates for unemployment benefits and for moratoriums on evictions and foreclosures.

Focusing on employment, the data was modestly good as nearly all Districts reported that employment rose, but for most, the pace was slow, at best, and the recovery remained incomplete. Those firms that were hiring continued to report difficulties in attracting and retaining workers, while the sharp rise in COVID-19 cases had precipitated more school and plant closings and renewed fears of infection, which have further aggravated labor supply problems, including absenteeism and attrition. Providing for childcare and virtual schooling needs was widely cited as a significant and growing issue for the workforce, especially for women—prompting some firms to extend greater accommodations for flexible work schedules. In several Districts, firms feared that employment levels would fall over the winter before recovering further. Despite hiring difficulties, firms in most Districts reported that wages grew at a slight or modest pace overall. However, many noted greater pressure to raise rates for low-skilled workers, especially in outlying areas. Staffing firms described greater placement success with competitive rates, and one firm instituted a minimum wage rate for its industrial clients.

In what may comes as a shock to the Fed, firms in most districts reported modest to moderate increases of input prices, while the selling prices of final goods rose at a slight to modest pace. Contacts noted that COVID-19 cases have caused ongoing disruptions and delays among short-staffed producers and shippers—raising transportation costs, which are then passed through to buyers.

Looking at the word count of the beige book, there was a fractional improvement in the “slowness” category with 30 instances of “slow” in December, down from 31 in October, although concerns about covid clearly jumped with mentions of covid or coronavirus spiking from 41 to 53 in December, the most since April. 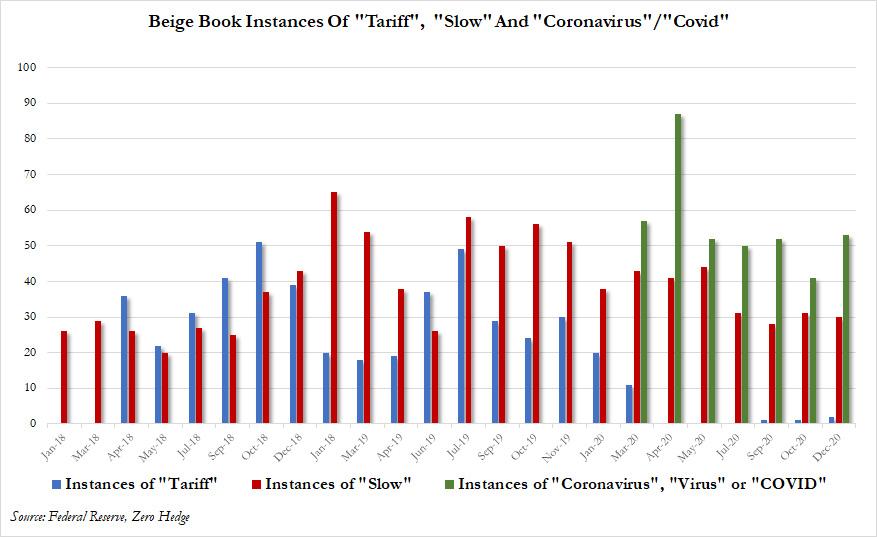 Finally, here is a highlight of key observations by district:

Manufacturers reported increased revenues from a year ago, including some strong gains. Retailers and staffing firms continued recovering toward pre-pandemic levels, while the hospitality and tourism sectors remained hard-hit. Uncertainty about the course of the pandemic, vaccines, and possible relief measures added caution to positive outlooks.

The regional economy has been flat, and the labor market has remained weak. Manufacturing growth slowed, consumer spending and tourism were little changed, and a number of service industries saw declines in activity. Commercial real estate softened further, but most residential sales markets continued to show strength. Wages and other business input costs picked up modestly, while selling prices were little changed.

Economic activity increased moderately, and staff levels increased slightly. Firms connected to IT, housing, and consumer durables fared better than those connected to travel, energy, and hospitality. Supply chain constraints boosted transportation costs and prices for certain construction and manufacturing inputs. Contacts expected a modest improvement in activity, but hiring plans were restrained because of the pandemic’s uncertain path.

Reports from District contacts suggest economic activity has continued to increase slightly since our previous report; however, conditions deteriorated toward the end of the reporting period. The overall outlook for business conditions over the next 12 months has improved but remains slightly pessimistic.

Economic activity continued to expand slightly. After rising in October, consumer spending fell slightly in November but was expected to bounce back in the coming months. Contacts in the manufacturing, residential real estate, wholesale trade, transportation, and professional and high-tech services sectors all reported increased levels of activity. In addition, the energy sector held steady, and the agriculture sector improved moderately.

Economic activity expanded modestly. Growth moderated in the manufacturing, retail, and services sectors. The housing market continued to outperform expectations, but office leasing remained weak. Energy activity remained depressed though it showed further signs of improvement. Outlooks were positive, though highly uncertain due to looming concerns surrounding political uncertainty and the unknown course of the pandemic.

Rabo: The World Has Broken Down Into “Quantum States”