The CBRT hiked its benchmark one-week repo rate by 200bps, more than the consensus economist forecast of 150bps, but in line with what some economists had argued was necessary with this year’s current account deficit heading over 5% of GDP amid elevated inflation pressures. 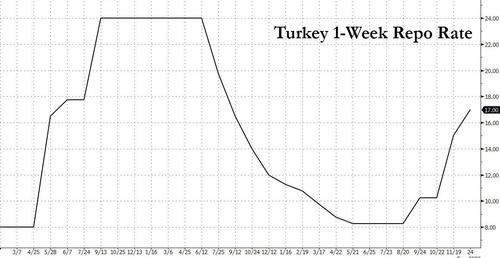 The bank pledged in its rates decision to maintain a tight stance until it sees “a permanent fall in inflation,” citing risks from a weak lira, domestic demand and commodity prices including food costs.

Having ended its experiment with Erdoganomics two months ago – which tried to keep inflation lower by cutting rates – and which led to a sharp 5% rate hike on Nov 11, the CBRT press release justified the rate hike as follows: “in order to eliminate risks to the inflation outlook, contain inflation expectations and restore the disinflation process as soon as possible.”

“It was good for the Turkish central bank to provide a slightly stronger push to rates than the consensus was expecting,” said Cristian Maggio, head of emerging markets at TD Securities in London. “It shows that the central bank is getting serious about inflation. They are not doing the bare minimum.”

While new CBRT governor Naci Agbal’s first move, when he raised the benchmark by the most in over two years to 15%, was in line with estimates and managed to stabilize the lira, the actual tightening in monetary stance was somewhat symbolic because as Bloomberg notes, “it brought the benchmark rate to around the central bank’s average cost of funding at the time.” His first step as governor also ended a complex rate-corridor structure criticized for its use of multiple rates and lack of transparency, moving Turkey to a more orthodox framework where all funding is provided through the benchmark.

Subsequent economic data illustrated why investors wanted to see more. Inflation in November climbed more than expected as the lira’s depreciation filtered through to prices, cutting the real interest rate by more than half to about one percentage point and curbing the lira’s appeal as a carry trade.

Despite the rate hike, Turks remained reluctant to convert their savings to liras, so foreign-currency deposits continued to rise in December.

Looking ahead, the central bank states that “in the forthcoming period, tightness of monetary policy stance will be decisively sustained until strong indicators point to a permanent fall in inflation in line with the targets and to price stability.” Wall Street strategists argue that depending on the evolution of the exchange rate and price developments, further tightening cannot be ruled out.

The new governor sent hawkish signals as recently as last week when he pledged to tighten monetary policy when warranted by price developments and to increase the bank’s holdings of foreign assets without derailing the lira. So far, investors and economists have welcomed Agbal’s stewardship of monetary policy.

The USDTRY traded from around 7.65 to as low as 7.56 in kneejerk response, with some FX strategists noting that the the pair could move further toward support at 7.51 though quiet holiday liquidity conditions may limit the scope for market moves today. 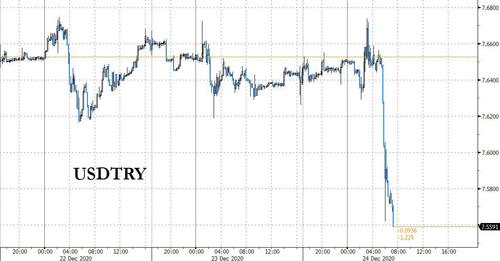