Senator Josh Hawley (R-MO) responded Thursday afternoon to an announcement by publisher Simon & Schuster that it would no longer publish his planned book, after the GOP lawmaker led objections to Congress’s certification of President-elect Joe Biden’s victory. 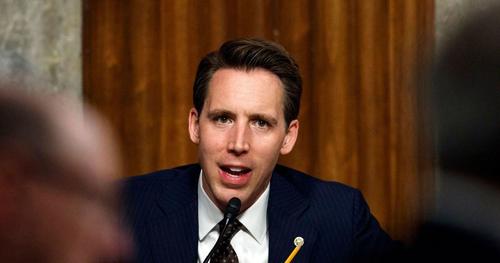 “After witnessing the disturbing, deadly insurrection that took place on Wednesday in Washington, D.C., Simon & Schuster has decided to cancel publication of Senator Josh Hawley’s forthcoming book,” the publisher said in a statement, adding “We did not come to this decision lightly.”

“As a publisher it will always be our mission to amplify a variety of voices and viewpoints: at the same time we take seriously our larger public responsibility as citizens, and cannot support Senator Hawley after his role in what became a dangerous threat to our democracy and freedom.“

Hawley responded in a Thursday statement via Twitter, saying “This could not be more Orwellian. Simon & Schuster is canceling my contract because I was representing my constituents, leading a debate on the Senate floor on voter integrity, which they have now decided to redefine as sedition.”

“Let me be clear, this is not just a contract dispute. It’s a direct assault on the First Amendment. Only approved speech can now be published. This is the Left looking to cancel everyone they don’t approve of. I will fight this cancel culture with everything I have. We’ll see you in court.”

My statement on the woke mob at @simonschuster pic.twitter.com/pDxtZvz5J0