Authored by Ryan Ledendecker via The Federalist Papers (emphasis ours)

The fight for the return of millions of schoolchildren to in-person learning continues to rage on, with various teachers unions wielding their political power to seemingly quash the idea, leaving America’s parents and students in a constant state of limbo while their academic progress continues to decline with remote learning. 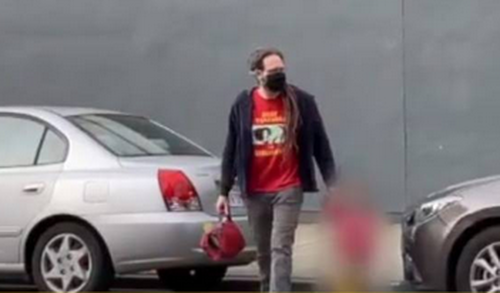 That’s why Berkeley Federation of Teachers president Matt Meyer, who has incessantly preached about how unsafe it is for students to return to the classroom, came under fire from a local group of concerned moms after he was spotted dropping off his two-year-old daughter at a private learning institution for in-person learning, according to Fox News.

Guerilla Momz, a California group of concerned parents who are pushing for a return to in-classroom learning, captured video footage of Meyer dropping off his child, holding nothing back as they criticized his hypocrisy.

“Meet Matt Meyer. White man with dreads and president of the local teachers’ union,” the group tweeted. “He’s been saying it is unsafe for *your kid* to be back at school, all the while dropping his kid off at private school.”

Meet Matt Meyer. White man with dreads and president of the local teachers’ union. He’s been saying it is unsafe for *your kid* to be back at school, all the while dropping his kid off at private school:https://t.co/BAIR5xH8LY#OpenSchoolsNow

After the video went viral around the country, Meyer was contacted by Fox News and, not surprisingly, attempted to justify his reason for taking his young child to in-person classes at a private institution while public school students remain in the dark.

“There are major differences in running a small preschool and a 10,000 student public school district in terms of size, facilities, public health guidance and services that legally have to be provided,” Meyer said. “We all want a safe return to school. The Berkeley Federation of Teachers is excited that Berkeley Unified will be reopening soon with a plan, supported by our members and the district, to get our students back in classrooms starting later this month.”

Meyer also took issue with the group of concerned mothers taking the video and posting it, calling it “very inappropriate” and remarked that it was a clear violation of his child’s privacy.

Some, like former PTA Berkeley Council president Mara Kolesas, said that Guerilla Momz took their attempts to expose Meyer too far and suggested that it’s an issue that needs to stay in the political realm.

“For me, you don’t need to attack people personally, you need to address it politically. When you start getting personal, you mix up dimensions, and you don’t get to discuss the real thing,” Kolesas said. “Here, the real thing is [Meyer] put fear before science, and the right of teachers before the right of kids. That’s the issue.”

While the idea of addressing the issue “politically” sounds good on paper, unfortunately, it’s not working. That’s ostensibly why the group of moms did what they did, to expose those who publicly insist on keeping kids home while quietly ushering their own children off to swanky, private institutions.

And Kolesas is simply flat wrong about Meyer “putting fear before science.” The “science” is clear — it’s absolutely acceptable and and completely safe to return children to the classroom, “politics” is what’s keeping that from happening.

The Capitol Riot Wasn’t a Coup. It Wasn’t Even Close.

Have You Heard Of The CIA’s Iran Mission Center?

“Victim-Centered” Justice Is a Threat to Due Process