New Infrastructure Will Not Come Good, Fast, Or Cheap

New Infrastructure Will Not Come Good, Fast, Or Cheap

Anyone naive enough to think America is about to receive a big gift of newfangled “fixed installations” needed in order to function should look long and hard at what is really being proposed. The “underlying structure” a country and the economy rely upon includes things such as roads, bridges, dams, water and sewer systems, railways and subways, airports, and harbors. None of these things are cheap to construct and when it comes to infrastructure the words, good, fast, and cheap should never be clustered together. While many people see government spending on infrastructure as a job creator and a silver bullet for our ailing economy I would like to raise a word of caution, things are not that simple. The cynical part of me thinks the American people should get ready to get bent over and taken advantage of.

Spending Trillions Likely To Result In An Epic Fail

Now that Biden’s massive Covid-19 relief package has been signed into law, talk is moving towards what is next on the agenda, That’s where, most likely, his infrastructure plan resides, and this is a plan set to explode the budget. If you think that $1.9 trillion is a lot of money, it pales next to what the Democrats are going to propose as they continue on their spending spree. It appears that Biden wants $3 trillion or more which should scare away moderates such as West Virginia’s Joe Manchin but it has not. Not only has Manchin not blinked at $3 trillion in new spending instead, he recently stated Congress should do “everything we possibly can” to pay for it. He said there should be “tax adjustments” to former President Donald Trump’s 2017 tax law to boost revenues, his endorsement of raising the corporate rate from the current 21 percent to at least 25 percent, however, would do little.

The debate over how much we need to spend and on what, could go on for ever but this is not the answer. Please note, this is not “free money” but that message is likely to be ignored in the same way a great deal of the population fails to appreciate that most of the $1.9 trillion has yet to be spent. An example is how screwed up this flow of money can be is apparent in Fort Wayne, Ind. the city announced only days ago it had  hired Homebase, a nationally recognized consulting firm to evaluate “the state of homelessness” in the city and layout a plan to address it. The project should take nine months, the city said. (Funding came through the CARES Act passed in late March of 2020.)

Many people seem to see money flowing from Washington, such as this infrastructure bill, as not costing us anything because the bill is shrouded with the message the project will more than pay for itself over time by creating greater growth. The problem is that when it comes to such spending, politicians often prefer to use such funds on what they view as legacy projects that will shape the future of their area or shiny pet projects that will enrich their cronies. Many of these tend to be rather wasteful and controversial and it is not uncommon to see them plagued by cost overruns.

In truth, when it comes to infrastructure, the Democrats and Republicans are not on the same page. While Republicans may be willing to spend federal money on things like highways, bridges, and airports, many Democrats are interested in using much of this money to build what they call “green infrastructure ” and promoting clean energy or things such as electric vehicles. In short, Democrats wish to use this money in a giant experiment to create what they hope will be a more sustainable world. Instead, we should prepare to see more “bridges to nowhere” and wasted spending exists than most taxpayers can imagine. 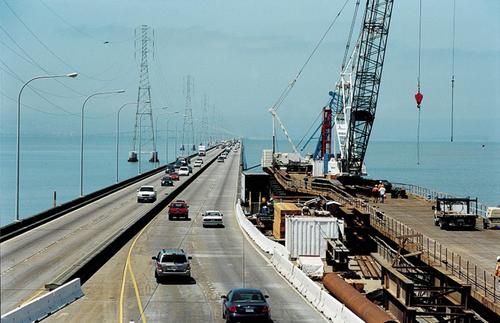 Building Bridges Creates Jobs But Is Not Free

With a huge infrastructure package now in the works, we should remember America’s national debt is exploding. This means it might be a good time to revisit the idea a country can create the illusion of economic prosperity by spending while at the same time not accomplishing its goals of long term growth. History shows that while a country can kick its gross domestic product into high gear by building a false economy based on infrastructure or war, this may not translate into sustainable growth. When a country gorges at the trough of deficit spending it can easily manipulate a big temporary boost in its GDP but solid growth is often the result of a slower well planned approach.

To be perfectly clear, the problem we face is that poorly spending even trillions of dollars does not necessarily create a strong economy. As usual, when it comes to government spending more often than not much of the money is simply squandered. This problem is exacerbated when the goal is to get it rapidly into the economy, “shovel ready” or a great deal of discretion is given to state and local officials as to how it should be spent. What is clear is that when Washington begins to talk about infrastructure spending hands go out across America as politicians and businesses  rush to endorse such programs claiming they should be administered on a local level so the money is not squandered by the inefficient minions of  Washington that do not understand the priorities we face.

Infrastructure spending has great potential to slide into the area of waste and corruption driven by political motivations rather than necessity. Much of the money slated for spending generally ends up financing boondoggles. The real test comes when questions are asked about the need for a certain project and the quality of the vision on which it is based. We must also take a deep look into how we set priorities and the payback or savings that will take place over time as a result of our investment. When looked at closely this is where large public or government building projects often fall short of our goals. It is not uncommon to find poor decision making and corruption creates projects that are overbuilt, expensive to maintain or have a lifespan far too short to afford a reasonable payback on the funds spent. Worse yet the cost of poorly planned projects can haunt us for years or decades.

The reason infrastructure spending can sometimes be considered part of a false economy is the number of jobs we claim are created from such spending are often only temporary and can be easy to overstate. While infrastructure spending brings the illusion of solid growth it is generally a long-term investment financed by creating debt, this debt often lasts for decades and long after the project is completed. Often the jobs such projects create quickly fade away. This makes it important the money is well spent or the bill will come back to haunt society and the economy over time.

See. This is Third-World Infrastructure!

Those promoting such massive spending often claim America has a third-world infrastructure which is poppycock. While things may not always be perfect, it is far from what much of the world has to deal with. The picture to the right is reflective of such an infrastructure. When things don’t work as planned in America, a lot of other factors are often involved such as a lack of accountability or the people in charge having no skin in the game. As stated before, solid growth is often the result of a slower well planned approach. This means creating clear smart prudent well defined goals and long term strategies on how to meet them. In the long run, a country’s economic policies and its system of taxation are far more important to the economy than government spending.

It is pure folly to think in our age of crony capitalism that infrastructure spending that tends to be poorly spent during the best of times, will be able to rapidly transform our economy in a positive way. Sadly, many people and politicians who devise such projects are more interested in a quick fix today or spurring growth rather than focused on building a better future. Any illusion all this is simple should be dispelled by those already lining up to steal this money. In the current environment, the one thing we can count on is that when all is said and done, the family members and friends of government officials and business leaders will pocket a good share of this money.