Here Is The Most Important Number In The Biden Budget

Here Is The Most Important Number In The Biden Budget

While there was far more than met the eye in Biden’s $6 trillion budget (released late on Friday ahead of the “long weekend” as if Joe desperately hoped nobody would read it as it pissed off both conservatives as well as socialists) as discussed last week his budget proposal to Congress did reveal what Goldman has called the “most important number” in the budget – it calls for an increase in the deficit of $800BN over 10 years (0.3% of GDP over that period) to accommodate his “American Jobs Plan” (AJP) and “American Families Plan”(AFP). While the amount is not surprising, according to Goldman this is the first time the White House has formally shown the net effect of their proposals over the ten-year period Congress will use when it considers them.

Why is this important?

As Goldman explains, this figure will be relevant to the congressional debate, as Democratic leaders will need to choose a dollar figure to include in a forthcoming budget resolution that directs the committees that will craft the fiscal package. Whatever figure they choose figure will set a limit on the reconciliation legislation that follows. In most recent budget resolutions, the directive has come in the form of a directive to increase the budget deficit by a certain amount. However, congressional leaders could also specify separate spending directives and tax directives. In either case, once the amount is set, the legislation that follows may not increase the deficit by more than directed.  While congressional Democrats are free to choose a different amount, the Biden budget is the first  formal indication from any of the key decisionmakers regarding how much they propose to increase the deficit to fund their proposals.

As for the “6 trillion proposal”, Goldman expects Congress to scale back the proposal, “with a risk that it is scaled back more than we have been expecting.” Goldman’s forecast assumes that Congress enacts a package of slightly more than $3 trillion, with tax increases of around half this much. However, for the first time since the start of the pandemic, the risks to Goldman’s fiscal assumptions appear skewed to the downside.

Why? Because if congressional leaders adopt the White House position that the total deficit impact of the forthcoming fiscal package should be kept to around $800bn over ten years (i.e., the “most important number”), this would mean that Congress would need to raise taxes much more than expected (which is unlikely as even centrist democrats have balked), or increase spending far less than expected.

And with regard to taxes, Goldman expects less than half of the Biden proposals to become law:

Specifically, we assume Congress will pass a 25% corporate rate, rather than the 28% the White House proposes, and that congress will substantially scale back the corporate tax increases on international income. We expect the top marginal individual rate to increase as proposed, but the capital gains rate is more likely to settle around 28% and that the increase is unlikely to take effect retroactively, as there appears to be tepid support for a capital gains rate increase among some centrist Democrats and making the tax hike retroactive could reduce support further.

Meanwhile, as noted above, the budget highlights the smaller scale of any additional fiscal boost. The budget proposes to increase the deficit by $118bn (0.5% of GDP) in FY2022, and $224bn (0.9%of GDP) in FY2023. Spending would increase by more than this—$265bn (1.1%) and$530bn (2.2%)—but around half of this would be offset with tax increases. These are big numbers in a normal policy and economic environment, but this amounts to only a fraction, on an annual basis, of the fiscal support Congress has provided over the last year. The chart below shows the Biden Administration’s estimate of the proposals effect on the budget deficit over the next ten years. 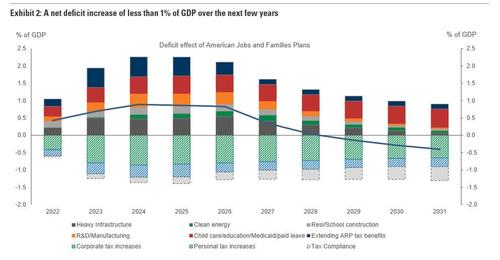 What happens next? We expect Congress to begin moving forward on these proposals next month.

Although bipartisan discussions on an infrastructure package are continuing, the already low odds of success appear to be dwindling further. With a nearly $1.5 trillion gap between the White House’s proposal and the Senate Republican offer, and even less overlap in how to finance the new spending, it is hard to see how a bipartisan agreement will come together. Instead, congressional Democrats are likely to move forward with one large reconciliation bill, requiring only 51 votes in the Senate, that encompasses both of President Biden’s major proposals (the AJP and AFP).

Here, Goldman assumes that the House and Senate Budget Committees will begin to move forward with the irrespective budget resolutions by mid-June, which will lay the procedural groundwork for the reconciliation bill and, as described above, set a limit on the deficit impact. It is possible that the House will begin to pass legislation in committee in June, but full House passage of the actual reconciliation bill will likely take until July.  The Senate could start on the bill in July, but passage in September or October looks more likely than July at this point.