Former Secretary of State Mike Pompeo accused the National Institutes of Health of trying to suppress a State Department investigation into the true origins of the COVID-19 pandemic – promoting the natural origin theory while peddling CCP talking points. 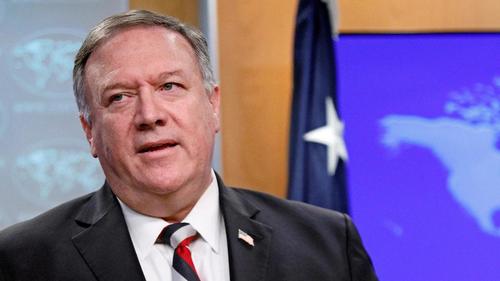 “[NIH] folks were trying to suppress what we were doing at the State Department as well,” Pompeo told “The Ingraham Angle” on Thursday, adding that NIAID Director Anthony Fauci was spreading Chinese government talking points in daytime interviews earlier in the day.

“To hear Fauci this morning talk about how the Chinese have an interest in us discovering what happened is just crazy talk. The Chinese have a deep interest in covering it up. They have done so pretty darn effectively,” said Pompeo, who added that the 80-year-old Fauci voiced “the exact same theories that the Chinese Communist Party has presented for over a year now.”

Didn’t he say yesterday that these are all people we’ve worked with for years and trust? https://t.co/HsdmKAMgpg

“He implies good faith for the Chinese Communist Party: We are on the 32nd anniversary of the Tiananmen Square [incident] For Dr. Fauci to go out and think the CCP cared that there were people in Wuhan who were dying… is just naïve beyond all possible imagination,” said Pompeo, who backed up reporting by Vanity Fair which noted that State Department official Miles Yu was actively translating and “mirroring” information provided by the Wuhan Institute of Virology’s website in order to compile a dossier of questions for the secretary, according to Fox News.

“When I received that [dossier] it was in early May [2020]. I was on TV talking about what I could get declassified at that point. We worked diligently to get them to declassify more,” said Pompeo, adding “[Then-DNI Director John Ratcliffe] was a great partner in trying to do that. But there were folks all over the community who did not want to talk about this … who did not want the world to know the Chinese Communist Party was in the process of covering up several million losses of life.“

Yet, while Pompeo says the NIH tried to cover up the lab-leak hypothesis, former FDA Commissioner Scott Gottlieb – who’s got a book to sell – made clear he’s on the other side of the fence – shifting from ‘China is hiding blood samples from sick lab workers!‘  to ‘probably natural origin‘ in the span of four days. Did someone get a tap on the shoulder?

“What do you think the likelihood is that it escaped from the Wuhan lab vs. the wet market? Is it 50%, 80%, how do you handicap that? asked CNBC host Joe Kernen during a Friday morning interview, to which Gottlieb replied: “I’d probably handicap it higher for a natural origin, but that shouldn’t be reassuring – I mean if you were gonna handicap it 60/40, 80/20, that’s by no means reassuring. I think at the end of the day, unless we get lucky and we either find the zoonotic source – the intermediate host that proves it came out of nature, or we have some whistleblowers from people who come forward with information from China that proves it came out of the lab, I think what we’re going to end up with, it’s gonna be unsatisfying because it’s gonna be an assessment that assigns probabilities to each scenario.”

“I don’t think we’re gonna end up with a definitive answer absent something that is a lucky break,” Gottlieb continued.

If this did come out of a lab, someone in the Chinese government knows that. They’ve had ample opportunity to make that admission for the world to provide that evidence and try to engage that global community to make sure this doesn’t happen again. The fact that they haven’t done this now is a pretty strong suggestion that they won’t.”

Kernen then shifted to the way the media covered up the lab-leak hypothesis, along with how US agencies dismissed the lab-leak theory.

“Start with this, doctor, it’s in a city called Wuhan. We know that there’s a bat lab that may have been doing some gain of function research on these viruses. Now we know that three people got sick in November of 2019 and needed to be hospitalized. And to make the leap that it absolutely came from the wet market when it’s quacking, walking, squatting like a duck, and everything looks like a duck – just to arbitrarily demonize anyone or any person or any agency or any media outlet that even intimated that it could come from a lab – something was going on there. Now where was the WHO and are they doing China’s bidding again? And where were our people in this country – we should have at least had our ears up...”

“Why was there pressure to bury this?”

To which Gottlieb replied: “A year ago most people would have said that the probability this came out of a lab was 1% or less. That was based on what we knew at the time…”

Kernen pressed the issue further – turning his attention to Fauci and what he knew, when:

“The three people that we now know that were hospitalized working in the lab – do you think Dr. Fauci, because he did have research relationships with that lab, do you think he was aware a year ago of that situation that three people had been sickened in the lab? Because a lot of the dogma and the dogmatic statements made by him about this – I don’t know how you could have made those if you knew; a) that it was in Wuhan, b) that they were gain of function research, c) that three people got sick and had to be hospitalized in that lab. Would you be as strident as him about the possibility of it coming from the lab at that time that you knew people had gotten sick?“

To which Gottlieb deflects: “Well I don’t know when Tony might have known those facts. He obviously has a security clearance and gets briefed … look, Tony – Dr. Fauci was getting briefed by a lot of the folks in the scientific community who were virologists looking at the sequence.”

What’s Gottlieb’s solution? Get the CIA involved (as he wrote in a February Op-Ed):

Fauci fixation & Covid origin focused. “Obsessed” will be next.