Citadel has reached a settlement with the British hedge fund it accused of trying to plunder one of its senior traders in an effort to get to its algorithmic “secret sauce”.

GSA Capital Partners LLC and Citadel announced the settlement late last week after Citadel accused the fund of obtaining “closely guarded” trading strategies when it hired the employee in question, Vedat Cologlu, according to Bloomberg.

GSA said of the settlement that the two firms “recognize and respect the importance and value of the other’s rights over their confidential information and intellectual property.”

We first documented that Citadel was suing British hedge fund GSA Capital in January of 2020, after GSA attempted to hire Cologlu, allegedly in hopes of accessing the quant secrets at the core of Citadel’s “ABC” automated trading strategy.

Recall, we wrote back in November of 2020 that Citadel was seeking around $40 million over claims that GSA was able to obtain information on the strategy via texts and WhatsApp.

Citadel argued late last year that GSA “can’t unsee” and can’t forget the information that was taken from Citadel’s secret algorithm. Citadel is also moving to try and block GSA from using their trading model. GSA has argued that they found no “secret sauce” from a high-level description of the structure of a trading algorithm. 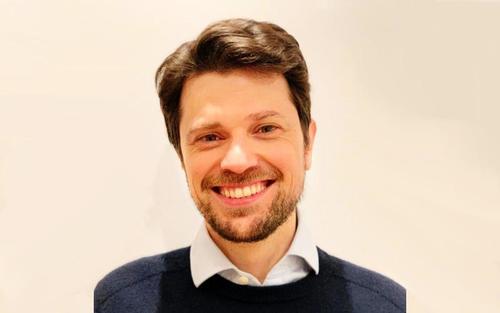 David Craig, a lawyer for Citadel Securities, said in late 2020: “GSA’s most senior managers now know where and how Citadel makes hundreds of millions of dollars in annual revenues. They cannot forget that information, or put it out of their minds.”

He noted that only 15 of Citadel’s 3,000 employees ever had access to the “strategic logic” of the strategy. One of those employees was Cologlu, a 2007 Wharton grad and self-described “stat arb trader“, who helped operate and administer the models whose “returns were notably high given the low level of risk it took on.”

Citadel has claimed its “ABC” quant strategy cost more than $100 million to develop. In its lawsuit, Citadel alleged that the UK fund wanted Cologlu to hand over confidential information about the strategy:

GSA asked for sensitive information on his equity-trading including his profits and the speed of the trades. And then Cologlu handed over a plan that Citadel argues was based on its own confidential model, including the way the algorithm made predictions.

And there’s good reason for the information to be coveted. Citadel Securities has been wildly profitable: the company posted a record $6.7 billion in revenue in 2020. This was almost double the previous high in 2018. The blockbuster result came after some of its traders moved from Chicago and New York to set up shop in a Palm Beach hotel in late March 2020 as the pandemic upended lives and markets across the globe. The results of the privately-held company were released in presentation to investors as part of a $2.5 billion loan Citadel Securities was seeking. 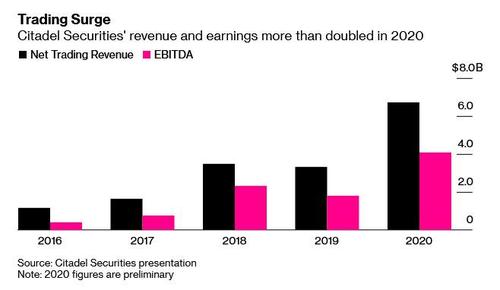 The Citadel securities trading arm started as a high-frequency market-maker in options before pushing into equities. Today, the firm dominates that realm and has had a very close relationship with the likes of the millennials’ favorite trading platform, Robinhood. We documented back in September 2020 that Citadel now controls 41% of all retail trading.

GSA was spun out of Deutsche Bank AG in 2005 and manages around $7.5 billion. Citadel’s legal filing names GSA founder and majority owner Jonathan Hiscox as a defendant, alongside other officials including the chief technology officer.

Back in January 2020, we noted the full details of Citadel’s lawsuit.