A liberal judge in Arkansas has ordered the state to resume federal pandemic unemployment benefits just one month after they expired, in yet another glaring example of why there’s a huge gap in unemployment claims between red and blue states (despite Arkansas being a red state).

On Wednesday, Pulaski County Circuit Judge Herbert Wright issued a preliminary injunction so the state can resume participation if the government will “agree to permit the State to do so.”

“If the appropriate federal authorities reject such a reinstatement, the State will immediately provide proof of such communication to the Court,” said Wright.

The decision stems from a lawsuit filed last Friday on behalf of five citizens seeking to enjoin the state from ending pandemic-related unemployment programs, which provided an extra $300 per week on top of state unemployment benefits which average $338 per week. The combined $638 average weekly income is the equivalent of $15.95 per hour for someone working a 40-hour work week, according to the NY Post.

In May, Arkansas Gov. Asa Hutchinson (R) announced that the state would end its participation in the unemployment programs on June 26 – which Hutchinson rightly claimed ‘actually interferes‘ with the ability to fill more than 40,000 vacant jobs in the state. There are some 69,000 unemployed Arkansans.

The plaintiffs in the lawsuit argue that Hutchinson lacked the legal authority to end the state’s participation in the program – which Wright acknowledged was voluntary, but he had “serious doubts that the Governor and the Director of Workforce Services were acting within the scope of their duties” when they canceled the aid.

“Thanks to the ruling, people will now be able to get benefits to help them pay the rent, keep their lights on, have enough food to eat, and see the doctor while they continue their job searches,” said Kevin De Liban, Legal Aid of Arkansas’s director of advocacy.

Half of all US states, largely run by Republicans, have announced plans to end federal unemployment benefits amid massive job shortages. 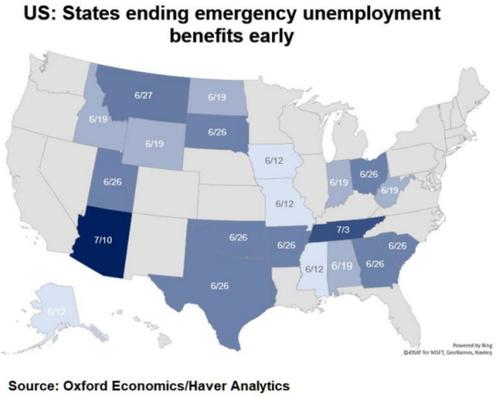 As the New York Post notes, ‘A recent poll by Morning Consult found that more than 1.8 million unemployed Americans have turned down jobs throughout the pandemic due to the generosity of the unemployment benefits. Of the 5,000 surveyed who were actively collecting the benefits, 29 percent said they turned down job offers, according to the poll.‘