If you want more proof that corporate America’s promises about achieving carbon neutrality are just more empty virtue signaling, take a look at this.

As Amazon works to bring the entire delivery process from warehouse to doorstep under its control, allowing it to wrest business away from FedEx, UPS and USPS while gearing up to launch its own delivery service, the e-commerce giant is increasingly relying on its private fleet of cargo planes to shuffle packages across the country quickly. According to an FT report, Amazon’s presence in the skies has continued to grow rapidly since the start of the pandemic, according to a new report. Recently, Amazon was running 164 flights a day in the US. 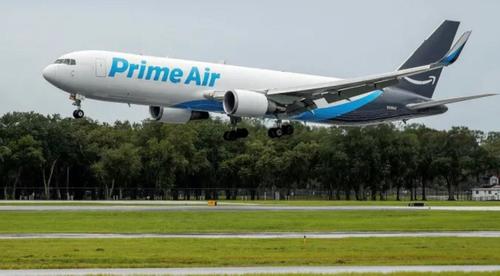 This represents a 17% increase over the prior year. What’s more, the report found that 70% of Americans now live within 100 miles of an airport with an Amazon Air presence, up from 54% just over a year ago. Amazon Air now has a fully operational fleet of more than 70 planes, and in the wake of the COVID pandemic, it’s taking air transport more seriously.

Eventually, it could fill a niche as the third competitor in the package delivery space – with itself as its biggest customer.

“There is no sign of Amazon slowing down their gearing up for expanded next-day delivery,” said the report’s lead author, Professor Joseph Schwieterman, from the Chaddick Institute at DePaul University. “There’s demand, by lots of businesses, to have more than two options for package delivery, with the US Postal Service seeming to be receding in the past few years,” the report said. Such a move “could change the landscape of a sector long dominated by FedEx, UPS, and USPS.”

Since February, Amazon Air has added services to and from seven additional airports, bringing the total number of airports hosting Amazon flights to 42. It has a major 800K sq foot hub in Cincinnati, and a 700K sq ft facility at San Bernardino airport, near Los Angeles, has become Amazon Air’s hub on the West Coast. Some groups have accused Amazon of racism for setting up these hubs in areas with large minority populations.

Such developments have proved controversial, with campaign groups accusing Amazon of engaging in “environmental racism” by placing its hubs in areas where surrounding communities are predominantly made up of people of colour. A proposal to investigate the impact of such developments was voted down at Amazon’s most recent shareholders’ meeting in May.

Amazon has pledged to achieve net zero carbon emissions by 2040, a task complicated by its van delivery fleet and its aircraft roster, which contains mostly older aircraft. In July 2020, Amazon announced it had bought 6m gallons of biofuel, which it said would reduce emissions from its old fleet by 20%.

Nevertheless, Amazon is pushing ahead with Amazon Air’s international expansion, which centers around its European hub in Liepzig.

On top of this, researchers said, were more than a dozen active international locations, though air traffic at a proposed European hub in Leipzig had been quieter than anticipated. In Europe, said Schwieterman, Amazon was “quietly growing without revealing their long range intentions”. “It could be just a matter of time before Leipzig becomes a hotspot for Amazon.”

The first big test for Amazon Air will be the coming holiday season, as the company seeks to reliably offer two-day, next-day and same-day delivery, Amazon Air is forming the backbone of the strategy.

Eventually, the company will likely need to hire more pilots. Let’s hope they don’t take their own advice to hire potheads.