If it wasn’t already abundantly clear that ESG investing has become one of the hottest investing crazes of the new decade, Cathie Wood’s announcement earlier this week that she had applied to the SEC for permission to launch an ESG-focused ETF – the fund will exclude alcohol, banking, chemicals, confectionary, tobacco, oil and gambling stocks, among others – should stand as a rather obvious confirmation.

But as the pace of growth in terms of assets dedicated to “ESG” funds started to accelerate, we started to notice that the assets being stuffed into these ESG funds didn’t really look all that different from a typical equity fund. Just take a look at a list of the most popular holdings from last year. 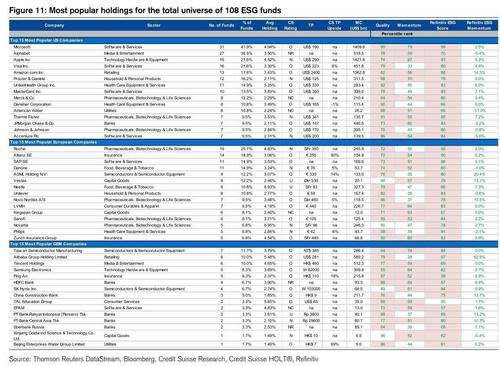 Now, take a look at the top holdings for ESGG, one of the top ESG-focused ETFs

Stocked with blue-chips, these funds don’t exactly scream environmentally friendly and socially responsible. One industry insider confirmed as much when he shared a new term: “green washing”. Since then, we have run at least a half dozen reports about abuses in the ESG space:

And that’s not all. Just days after SEC chief Gary Gensler said the SEC wanted to push asset management firms and banks to come up with more disclosures surrounding ESG funds and investments, Bloomberg is reporting that the SEC has launched yet another investigation to try and ascertain just how much of the $35 trillion ESG industry is stocked with “dubious” funds selling assets with little or nothing to qualify them as “green”.

For several months now, the SEC has been demanding that money managers explain the standards they use for classifying funds as ESG-focused. The review is the SEC’s marks the second time the agency has looked into possible ESG mislabeling since last year, a sign that the issue is “a priority for the agency and a reason for the industry to worry about a rash of enforcement actions,” according to Bloomberg. Back in April, the SEC released a report claiming that some investment advisors weren’t doing nearly enough to ensure that their ESG “marketing” rang true. Some violations were so egregious the SEC said they could be in violation of the law. The industry responded by explaining that these types of standards are difficult to assess because every firm has its own definition of what constitutes ESG.

Just the other day, the press revealed an investigation launched by German and US authorities (including the SEC) into whether Deutsche’s asset-management arm DWS Group exaggerated the environmental credentials of some investment products. The investigation was launched after a former senior executive blew the whistle. While DWS rejected the claims, its shares tumbled on the news.

Per BBG, the SEC is “following the money”.

“It is a real area of scrutiny, particularly as it relates to disclosures,” said Morgan Miller, a partner at law firm Paul Hastings in Washington and a former SEC enforcement attorney.

The SEC is following the money: Few businesses are booming in high finance like sustainable investing, as governments, pension plans and corporations all seek to lower their carbon footprints and be better public citizens. Amid the rush for dollars, more and more ESG insiders have started sounding alarms that a lot of the marketing is hype, a term known in the industry as greenwashing.

With Hurricane Ida getting people worked up about “climate change” once again, we wouldn’t be surprised to see billions more flow into ESG funds over the coming weeks.

BBG’s sources also claimed that the SEC sent a flurry of letters to investment advisors who were asked to describe “in painstaking detail” the process used to ensure assets are worthy of the ESG designation.

Letters that the SEC sent out earlier this year point to some of the agency’s top concerns, said the people who asked not to be named because the correspondence isn’t public.

Investment advisers were asked to describe in painstaking detail the screening processes they use to ensure assets are worthy of ESG designations, one of the people said. The SEC also wants to know how firms are grappling with different jurisdictions’ requirements. For instance, Europe has specific standards that money managers must adhere to in making sure assets are green or sustainable. But in the U.S., it’s much murkier.

Another SEC query sought information about ESG compliance programs, policies and procedures, a different person said. The SEC additionally asked about statements made by managers in their marketing materials or regulatory filings.

Since March, European money managers have had to disclose the actual ESG features of products being touted. In the U.S., no such mandate exists — prompting confusion among financial firms and investors alike.

But that could soon change, as one source told Bloomberg that the SEC’s latest probe was bound to turn up some disappointing discoveries.

“Given the squishiness of what it means to be an ESG investor, I’m suspecting they’re going to find some interesting things,” Phillip Gillespie, a senior counsel at WilmerHale in Boston, said of the SEC.

With regulators in both the US and Europe closing in, the ESG bubble is likely bound to end in a similar manner to the asset bubbles that came before, like the tech bubble, the biotech bubble, etc.: with a brutal crash as investors realize that ESG’s promise to save the world while generating alpha is hollow marketing babble, not a viable vision for their investments.