China expanded its escalating crackdown on cryptocurrencies on Friday when its central bank declared that all activities related to digital coins are “illegal” and must be banned.

In a statement the People’s Bank of China said the latest notice was to further prevent the risks surrounding crypto trading and to maintain national security and social stability. 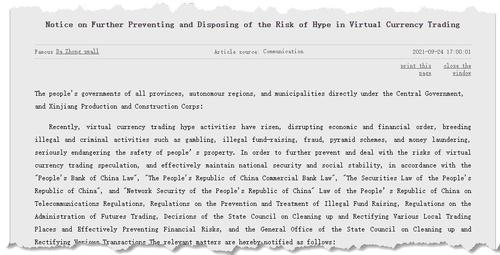 Curiously, the statement is dated September 15, but only hit the central bank’s website at 5pm on Friday.

PBOC’s announcement about ban crypto got widespread today is was ANNOUNCED ON SEPTEMBER 15TH, but got posted online today. The market already reacted on those regulatory fud.https://t.co/BPlVQEMVMt pic.twitter.com/e0U7gbEHnY

Incidentally, the news was already priced in once, with rumors of PBOC crackdown sending the price of bitcoin lower in mid-September when Bitcoin traded just below $50,000.

The market already heard the rumors around mid-September, and reacted on those fud by then. DON’T FALL FOR THE FUD AGAIN. https://t.co/pew1kyCZ3d

Naming bitcoin, ether and tether as examples, the central bank said cryptocurrencies are issued by nonmonetary authorities, use encryption technologies and exist in digital form and should not be circulated and used in the market as currencies. The PBOC specifically targeted overseas cryptocurrency exchanges declaring that it was illegal for them to provide online services to residents in China.

Other key points on #China notice to prevent and manage risk of “hype” in #crypto trading: “overseas virtual currency exchanges providing services to Chinese residents through the Internet are also illegal financial activities.” Chinese working at those outlets held responsible.

#China central bank reiterates #virtualcurrency “does not have the same legal status as legal tender”. Says #Bitcoin, #ether, and #tether are not legal and “should not and cannot circulate as currency” in the Chinese market. (New part is naming specific #crypto currencies.)

The statement is the culmination of years of failed crackdowns on cryptos and is nothing new for the authoritarian state. In 2013, the country ordered third-party payment providers to stop using bitcoin. Chinese authorities put a stop to token sales in 2017 and banned crypto exchanges from operating within its borders in 2019 but individuals in the country continued to find ways to trade bitcoin and other digital currencies via over-the-counter or peer-to-peer transactions. More recently, the country banned all crypto mining, which however only prompted miners to shift offshore.

In May this year, a powerful Chinese superregulator pledged to crack down on bitcoin trading and energy-intensive mining, helping to send the price of bitcoin tumbling, only to rebound again. Financial regulators in the country have also gotten tougher on banks and payment companies and in June ordered them to take a more active role in weeding out crypto-related transactions.

This latest harsh directive, which sent Bitcoin dropping over 8% on Friday, comes as global markets have grown increasingly concerned over a debt crisis involving property developer China Evergrande Group, and which many speculated would lead to a surge in capital outflows via cryptos that bypass China’s great firewall. The Chinese government may also be responding to signs that miners are disguising their activities to stay in business according to Bloomberg. 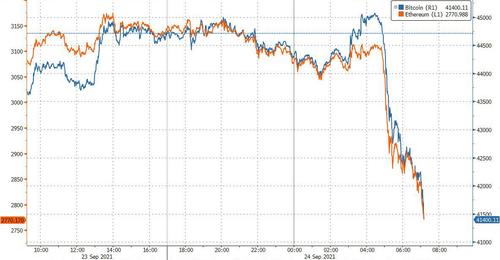 Vijay Ayyar, head of Asia Pacific with cryptocurrency exchange Luno in Singapore, said that while the Chinese government has made similar statements in the past, it is “a slightly nervous environment for crypto with the recent SEC comments and overall macro environment with the Evergrande news. So any comments of this nature will cause a sell-of in risky assets.”

Investors should expect “knee-jerk price reaction as China takes the wind out of Bitcoin’s sails,” said Antoni Trenchev, co-founder of crypto lender Nexo.  “The recent rebound from just below $40,000 has likely run its course for now.”

The nation’s economic planning agency also said it is an urgent task for China to root out crypto mining, and the crackdown is important to meet carbon goals.

It was unclear what prompted the latest crackdown, however one theory is that it’s part of a broader law-and-order push ahead of the 100th anniversary of the Chinese Communist Party this year. Another more likely theory is that China is aggressively clearing the runway for its very own digital yuan, a central bank digital currency that’s been in development since 2014, and whose market reception has been catastrophic so far.

The most likely reason behind the crackdown is that Beijing is simply looking to stem capital outflows via stablecoins and cryptocurrencies. As a reminder, tether remains one of the preferred conduits for Chinese resident to launder over $1 trillion in domestic currency abroad. And with turmoil emerging from the Evergrande default and imminent deterioration in the property sector, it is inevitable that Beijing is fearing a new flood of outbound capital transfers will follow so it is taking preemptive steps.

Then there are those who suggest that such attempts to ban bitcoin will only further streghten it showing its resilience and ability to withstand sovereign pressure. Back in July, after another similar crackdown by China, Alyse Killeen, founder and managing partner of bitcoin-focused venture firm Stillmark, told CNBC that this whole conversation may be a moot point, as a government’s capacity to effect a bitcoin ban will only continue to erode over time.

“I’d expect this type of news to have less of an impact on bitcoin’s exchange rate than it has historically,” she said. “It’s also true that there has been some level of industry inoculation to this news – bitcoin has been banned many times in many geographies, and yet today adoption is outpacing internet adoption at a similar lifecycle stage.”