A new documentary called “Fauci,” released by National Geographic Documentary Films two weeks ago, honors Dr. Anthony Fauci’s work to combat the HIV/AIDS epidemic and COVID-19 pandemic. Since the release two weeks ago, there’s been no data on ticket sales by major film sites, according to Just The News.

The new documentary was released in theaters across York, Los Angeles, San Francisco, D.C., and New Orleans on Sept. 10. No major film site, including RottenTomatoes.com, Boxoffice Pro, IMDB.com, and BoxOfficeMojo.com, has calculated ticket sales or earnings for the film.

The documentary “follows the renowned infectious disease specialist’s work in two health crises: AIDS and the coronavirus pandemic. Dr. Fauci agreed to participate as long as it didn’t interfere with his work,” NYT tweeted.

“Niche distributors often lack the proper resources for data reporting. That may or may not be the case with this particular documentary,” said Robbins. He said it’s too early to suggest “Fauci” has become a flop at theaters, but time will tell.

Just The News said the film had one condition before seeing it: patrons of the theater had to show their vaccine cards. 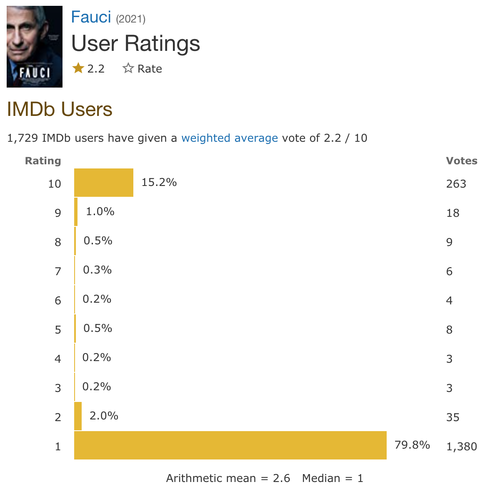 The movie does indeed humanize Fauci with stories about his family. He said they are being harassed because of his work. So what do they do? They put their images and information in the movie….😧

Then along comes Bono’s interview. I’m still trying to figure out what a singer really has to do with any of this.

It has interesting interviews, but is a very one sided movie. It’s mostly politicos trying to dig out poor ole Dr. Fauci from the avalanche of his massive PR nightmare. He’s 80 years old, maybe just maybe it’s time to relax and retire.

The mystery remains why National Geographic continues to withhold the box office earnings of Fauci, but the poor reviews at IMBD suggest the flick might have been a flop, and that is why.