Late last night, in a lengthy post summarizing all the recent fabrication spewed forth from the Citadel-Robinhood complex, we asked a simple question: Did the president of Robinhood dump all his AMC stock right before they restricted trading.

The reason for the question is that on page 4 of the amended class action lawsuit complaint (docket 21-2989) we read that ahead of Robinhood’s infamous halt of trading of over a dozen memo stocks, Robinhood Securities President and COO, James (Jim) Swartwout said in an internal chat on January  26, 2021, “I sold my AMC today. FYI  –  tomorrow morning we are moving GME to 100% – so you are aware.”

Fast forward just a few hours when, at least according to Charlie Gasparino, the answer is not only a resounding yes, but the SEC is already looking into it. According to the Fox Business reporter, “employee trading scrutinized by @SEC_Enforcement includes those by the firm’s prez Jim Swartwout, who sold shares of $AMC during the meme stock frenzy.” In response, the position of Robinhood – whose mission is “to to democratize finance for all” but mostly its own top employees – claims that the trades “aren’t illegal.”

Keep a close eye on this, especially since the torrent of tweets from Robinhood’s alleged partner in crime, Citadel, continues with another two this afternoon, in which the hedge fund-slash-internalizer once again went for the ad hominem, slamming “conspiracy theorists” – very much the same way it slandered this website a year ago when it threatened to sue us for claiming it was frontrunning its clients… until FINRA proved us right – for “churning baseless theories.”

Our primary Robinhood point person had to ask Robinhood if the Twitter posts on the trading restrictions were “fact or fiction?” pic.twitter.com/khHHO1STSz

Which, however, immediately prompted even more questions: how can the time stamp on the chat log say 8:39am EST when the timestamp on the Robinhood tweet is some 80 minutes later, or 9:56am. 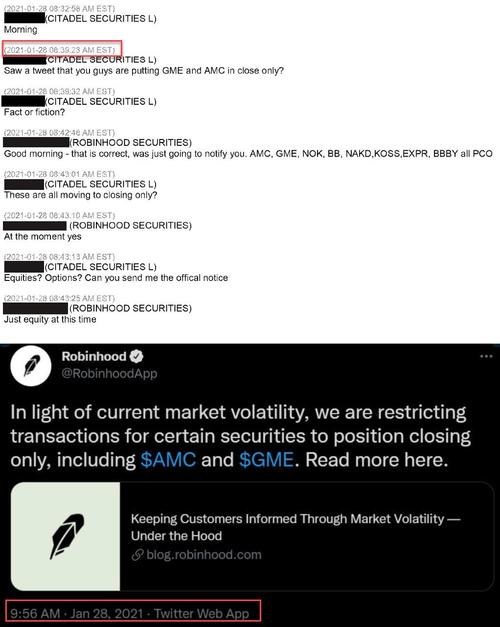 Maybe when in a hole, Citadel should stop digging, or at least tweeting.