While the past few days have seen a spike in investor nerves when it comes to tech stocks as a result of a sharp spike in real, the broader market remains just shy of all time and one would be hard pressed to argue that prevailing sentiment – especially in the retail camp – is anything but euphoric.

Not Goldman’s Rocky Fihsman though: according to the derivatives strategist, equity markets are far from complacent as Monday’s late afternoon sell-off drove the VIX above 19 – despite persistently low SPX realized volatility: the SPX hasn’t closed +/- 1% in a day for more than five weeks. 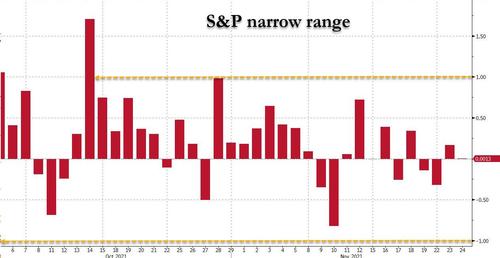 Longer-term option prices show even more caution about the coming year. As Fishman notes, 12-month, 25% out-of-the-money put options – which would only begin to pay off in a market crash that sends the S&P below 3,500 – now cost 2.4%, more than they did at any point in 2017-9. 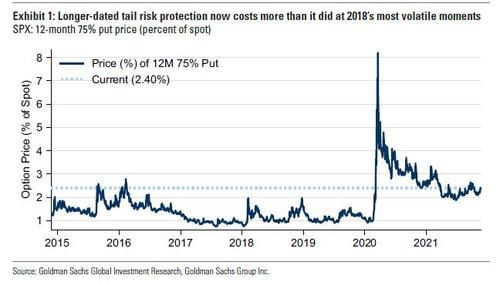 This is hardly a surprise, and it confirms what we have observed previously namely the lack of complacency in option markets, where VIX, and longer-term metrics have been rising despite low realized volatility. Indeed, as the next chart shows, the VIX is at the highest level for an S&P at all time highs since August. 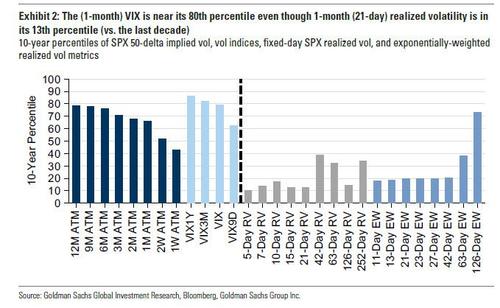 One fundamental reason for elevated near-term implied volatility is the likelihood that decisions on the fiscal package and debt limit will happen in the coming weeks. That said, even longer-term implied volatility continues to be striking, and the 12-month VIX of 27% is more than double 12-month SPX realized volatility, leaving longer-dated hedges unusually expensive. While Goldman thinks realized volatility will not remain as low as it has been in recent weeks, the bank expects it to fall well short of market-implied levels in the coming months. 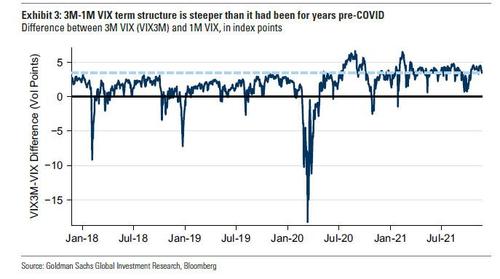 Stepping away from the nervous seas in equities, we find nothing short of turmoil in rates where volatility is approaching levels rarely seen in recent years. According to Goldman, the rapidly rising interest rate implied volatility, following some of the highest bond price realized volatility in years, is one additional reason for equity implied vol to be supported. To be expected, however, the bank’s rates strategists see US rates volatility as overvalued and should interest rate volatility stabilize, the SPX vol risk premium could ease as well. 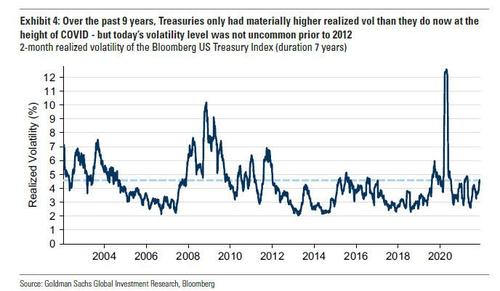 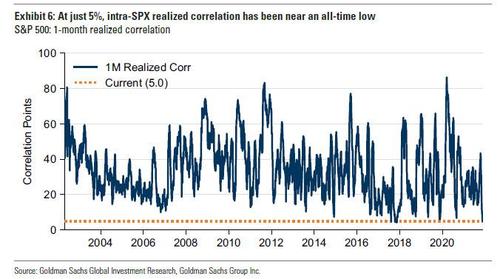 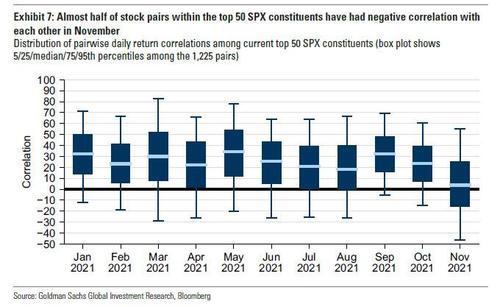 On the one hand, buying single stock options instead of index options is a rational response to low correlation, but more importantly, the non-fundamental stock trading generated by large option activity is likely also a contributor to low stock-by-stock correlation.

Goldman client recos: keep hedges short-dated, look to sell longer-dated options: as Fishman explains, given that he views the entire SPX volatility surface as expensive, the best approach to hedging at the moment is to keep hedges short-dated and low-premium, and look for opportunities to roll hedges at a profit.

For the bulls out there, selling rich longer-dated SPX options, and in particular puts, can be an alternative to long equity positions or can finance shorter-dated protection.

Goldman also continues to like short-dated VIX put spreads: a quiet end to the year, i.e., uneventful resolutions to the outstanding fiscal and debt ceiling questions and continuing single-digit SPX realized vol, could drive the VIX to the low- to mid-teens by the December expiry (here seasonality and the calendar both help: mid-December has the lowest 10th percentile VIX of the year, and the 22-Dec expiry is on the penultimate pre-holidays trading day with three holidays in the 30-day period it references). 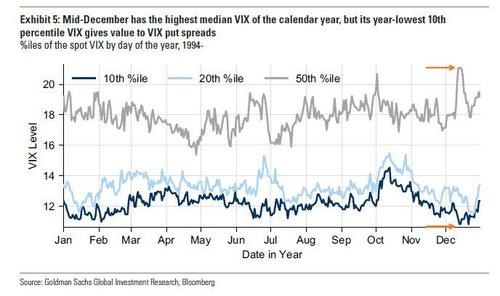 Pro subs can find the full report in the usual place.