In a world where millions protest daily against the creeping tyranny of a big government which is abusing the neverending covid tragicomedy to get so much bigger it would make even George Orwell cringe, one country actually had a opportunity to put an end to “vaccine passports” and totally blew it: despite months of protests, Swiss citizens overwhelmingly voted to keep the country’s system of Covid vaccination certificates in place (not surprisingly, the deal was sweetened by the promise of financial assistance for voters).

According to RT, Sunday just over some 62% of voters chose to maintain the country’s coronavirus measures which include a controversial system of Covid vaccination certificates, required since September to enter bars, restaurants, theaters and other public spaces. Majorities in 24 of Switzerland’s 26 cantons backed the law, with only the tiny cantons of Schwyz and Appenzell Innerrhoden rejecting the measures. 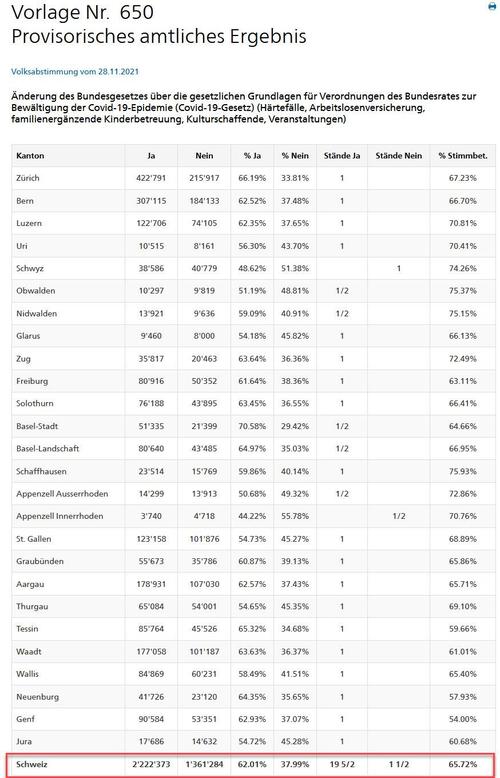 And since covid has emerged as every politician’s best friend, all Swiss political parties with the exception of the right-wing Swiss People’s Party supported the law, which was brought to a vote after anti-lockdown groups gathered nearly 200,000 signatures to challenge it earlier this year. Under Switzerland’s system of direct democracy, any initiative can be brought to a vote with 100,000 signatures.

Curiously, while voters in June backed the introduction of the measures by 60%, recent months have seen protests break out in Swiss cities over the introduction of vaccine certificates. Police in October used rubber bullets, tear gas and water cannon to disperse crowds of people who broke through barriers outside the parliament building in Bern. And yet, almost six months later, the support for the controversial measures appears to be even higher than when they were first introduced – one almost wonder if the entire referendum was by mail…

Alas, we will never know the answer.

“The democratic process has been respected but the law is still unconstitutional,” Michelle Cailler of the ‘Friends of the Constitution’ group said after the vote on Sunday. Cailler’s group was one of several who campaigned against the law.

Céline Amaudruz of the Swiss People’s Party, which is currently topping opinion polls in Switzerland, called on the government to take “coherent and measured” action, rather than treating the result as a “blank cheque” to impose whatever coronavirus-related policies it wishes.

The law voted on provides for more than just vaccine passports. It also expands financial support for citizens and businesses affected by the pandemic, a provision that may have won over some reluctant voters.