The emergence and acceptance of Modern Monetary Theory has turned our economic system upside down. Skeptics of its substance and sustainability have been brushed aside temporarily but expect the MMT experiment to collapse and end in ruin. To us that believe in old school economics, debt matters and is tied directly to interest rates and inflation. Central banks across the world claim the lack of inflation is the key force driving their QE policy and permitting it to continue, however, the moment inflation begins to take root much of their flexibility will be lost. This translates into governments being forced to pay higher interest rates on their debt.

With America’s national debt now blowing past 29 trillion dollars, it is important to keep the numbers in perspective. Nothing is as sobering as looking at future budgets. Those of us rooted in the tried and true economics relied upon in the past are worried.  For years the argument that “This Time Is Different” has flourished but history shows that periods of rapid credit expansion always end the same way and that is in default. This also underlines the reality that any claims Washington makes about the budget deficit being under control is a total lie.

America is not alone in spending far more than it takes in and running a deficit. This does not make it right or mean that it is sustainable. Much of our so-called economic growth is the result of government spending feeding into the GDP. This has created a false economic script and like a Ponzi scheme, it has a deep relationship to fraud.

Global debt has surged since 2008, to levels that should frighten any sane investor because debt has always had consequences. Much of the massive debt load hanging above our heads in 2008 has not gone away it has merely been transferred to the public sector where those in charge of such things feel it is more benign. A series of off-book and backdoor transactions by those in charge has transferred the burden of loss from the banks onto the shoulders of the people, however, shifting the liability from one sector to another does not alleviate the problem.

When the 2018 financial year budget was first  unveiled it was projected to be $440 billion. An under-reported and unnoticed later report painted a far bleaker picture. The report titled the “Mid-Session Review” forecast the deficit much higher than originally predicted. The newer report predicted the deficit would come in at $890 billion which is more than double what they predicted in March of 2017.

Such a miss should bring up the question of whether the discrepancy in the 2018 budget is an outlier or a sign of incompetence. This is especially troubling because what was projected as a total budget deficit of $526 billion for the 2019 Fiscal Year was later revised to a staggering $1.085 trillion. Not only should the sheer size of these numbers trouble us but we should remember that until recently some Washington optimists were forecasting that deficits would begin to decline in 2020 and that we would even have a small surplus of 16 billion in 2026. Since then, the wild spending those in charge have justified due to Covid-19 has blown the lid off that glimmer of hope and replaced it with more trillion-dollar deficits going forward.

Back then, the summary that began on page one of the Mid-Session Review came across as a promotional piece using terms like MAGAnomicics. It praised and touted the Trump administration for its vision and great work. This is a time when it would be wise to remember numbers don’t lie but the people using them do. That report is an example of how to re-frame a colossal train wreck into something more palatable. The report even went so far as to assure us that the deficit would fall to 1.4 percent of the GDP in 2028, from what was then 4.4 percent.

As a result of the American economy having survived with little effect what was years ago was described as a “financial cliff” the American people have become emboldened and now enjoy a false sense of security. Today instead of dire warnings we hear news from Washington and the media about how the stock market continues to push into new territory and all is well.

The chart to the right predicted that by 2019 the national debt would top 12 trillion dollars, instead it hit 23 trillion. Projections made by the government or any group predicting budgets based on events that may or may not happen at some future date are simply predictions and not fact. This means that such numbers are totally unreliable. The ugly truth many people ignore is that starting in 2018 entitlements became the driving force that will carry the deficit higher and higher into nosebleed territory. Even though we have seen deficits reach unprecedented levels the deficits in our future will be dramatically worse.

It is very disturbing that so many people have forgotten or never taken the time to learn recent financial history. By recent, I’m referring to the last fifty to one hundred years. The path that Fed Chairman Paul Volcker set right decades ago has again become unsustainable and many people will be shocked when this reality hits. Do not underestimate the value of insight gained from decades of economic perspective. It tells us the economy of today is far different from the way things have always been.

Back in September of 2012, I wrote an article reflecting on how the economy of today had been greatly shaped by the actions that took place starting around 1979. Interest rates, inflation, and debt do matter and are more significant than most people realize. Rewarding savers and placing a value on the allocation of financial assets is important. It should be noted that many Americans living today were not even born or too young to appreciate the historical importance and ramifications of the events that took place back then. The impact of higher interest rates had a massive positive impact on corralling the growth of both credit and debt. It acted as a crucial reset to the economy which lasted for decades. Below is a copy of that article.

In his book “A Time For Action” written in 1980 William Simon, a former Secretary of the Treasury tells how he was “frightened and angry”.  In short, he sounded the trumpet about how he saw the country was heading down the wrong path. William Simon (1927 – 2000) was a businessman and a philanthropist. He became the Secretary of the Treasury on May 8, 1974, during the Nixon administration, and was reappointed by President Ford and served until 1977.

I recently picked up a copy of the book that I had read decades ago and while re-reading it I reflected on and tried to evaluate the events that brought us to today. As often the future is unpredictable, looking back, it is hard to imagine how we have made it this long without finding long-term solutions and addressing the concerns that Simon wrote about so many years ago. Back then it was about billions of dollars of debt, today it is about trillions of dollars. It appears that something has gone very wrong.

By the end of the 70s inflation started to soar. Only by taking interest rates to nosebleed levels was then-Fed Chairman Paul Volcker able to bring inflation back under control. Paul Volcker, a Democrat was appointed as Federal Reserve chairman by President Carter and reappointed by President Reagan. Volcker is widely credited with ending the stagflation crisis where inflation peaked at 13.5% in 1981. He did this by raising the fed fund rate which averaged 11.2% in 1979 to 20% in June of 1981.  This caused the prime rate to hit 21.5% and slammed the economy into a brick wall. This also affected and shaped the level of interest rates for decades. 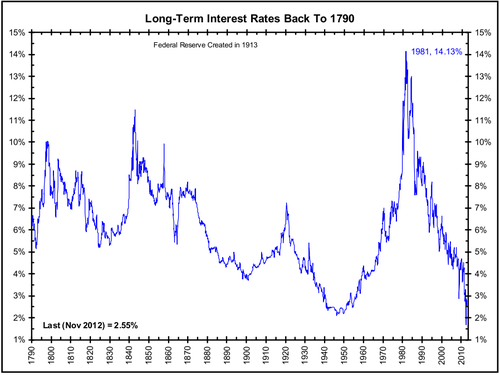 Rates Today Are Ready To Fall Off The Chart!

This action and the increased interest rates in the following years are credited by many to have caused  Congress and the President to eventually balance the budget and bring back some sense of fiscal integrity and price stability to America.  As the debt from the Vietnam war and soaring oil prices became institutionalized we moved on. Interest rates slowly dropped and the budget came under control. In recent years spending has again started to grow and at the same time taxes have been cut. This has slowly occurred over years and has been ingrained in the system.

In 2012, with our debt at 23 trillion and growing the path has again become unsustainable and many people will be shocked when reality hits. As our debt climbs some Americans feel just as frightened and angry as Simon did so many years ago. America has kicked the can down the road, failing time and time again to face the tough decisions. Part of the problem is the amount of debt has grown so large that we can no longer imagine or put a face on it. Until now, a series of different events have delayed the day of reckoning that will eventually arrive. Many of us see it coming, but the one thing we can bank on is that when it arrives most people will be caught totally off guard.

Summary of the current situation

Today we stand at the abyss, yet no one sees or feels threatened by a “financial cliff.” Insane spending has become the new normal. Who would have thought it would come to this? The updated revisions of the past have been washed away and replaced with more numbers, larger numbers. What we are witnessing today is insane. It is time to revisit the issue of how interest rates, inflation, and debt all come together. While this is not what those in charge want, it will happen. Simply put, there will be a reckoning, this time is not different.