Q1 Earnings Preview: “The Last Big Beat For A While”

Q1 Earnings Preview: “The Last Big Beat For A While”

One of the big mysteries of corporate America is that quarter after quarter, corporations have been able to defy monetary gravity and pass along soaring input cost and wage inflation to consumers, reporting record (or near record) earnings even as skeptics have called the end of the record profit juggernaut. But according to Bank of America the party is about to end with a bang, and in the bank’s Q1 earnings preview, the bank’s chief equity strategist Savita Subramanian writes that this is the “last big beat for a while.“

First the good news: in keeping with the tradition of solid profit beats, Subramanian writes that 1Q S&P earnings which kick off on Wednesday when JPMorgan report premarket… 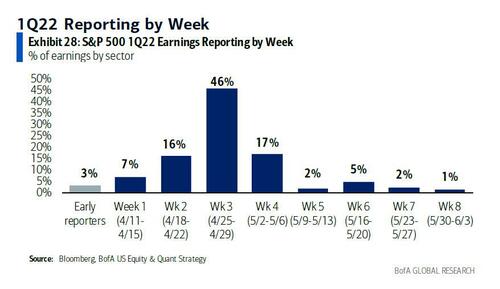 … after beating consensus by 5% in Q4 (vs. 2.5% long-term average but well below the post-COVID avg. beat of 17%), consensus 1Q EPS fell 1% over the past 3 months, the first downward revision since 2Q20 even though data was resilient in 1Q and rhetoric remains upbeat despite bad macro headlines. Bottom line, according to BofA, Q1 earnings will post a 4% beat, or $53.50 vs. consensus $51.54.

If that’s the good news, the bad news is that Q 1will also be ” as good as it gets” for a while, and will mark a reset in expectations: beyond 1Q, BofA warns (and Morgan Stanley agrees) that consensus expectations appear too high. Indeed, while analysts expect record margins in 2Q-4Q, with earnings slated to accelerate into 2023, history suggests that oil shocks spawn weaker consumption with a 3-4 quarter lag, indicating a 2H slowdown and, if BofA’s Michael Hartnett is right, a recession shock in just a few months. Indeed, cracks are already forming– see the recent freight implosion, slowing housing, falling lumber prices, etc. And while consensus 2022 EPS may be higher, this is solely due to higher Energy, while consumption oriented sectors do not reflect a slowdown in 2H. BofA disagrees, and is 7% below for 2H22 and 8% below for ’23. 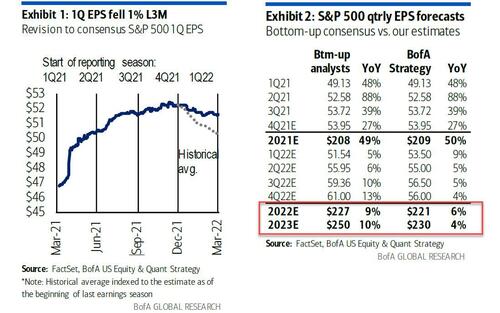 What about profit margins – can these still keep rising despite the recent explosion in costs?

According to Bank of America, not a chance: As Subramanian writs, “our Corporate Misery Indicator, our macro indicator for profit environment, slightly improved QoQ but remains well off its highs, suggesting a similar margin environment in 1Q. Consistently, consensus margins for 1Q point to flattish margins QoQ.” Yet despite soaring cost pressures, analysts continue to expect S&P net margins (ex-Fins) reaching new highs by 2Q, which is clearly overly optimistic and BofA (and we) see downside risks to consensus earnings.

What do early reporters indicate? According to BofA, so far 20 companies (primarily “early reporters” with February quarter-end) have reported 1Q results – these early reporters are concentrated in Consumer, Tech and Industrials, but can often give a read on the full quarter’s results (there is a 71% correlation between the proportion of early reporter beats on EPS and sales and the proportion of full-quarter beats on EPS and sales). The good news is that so far, 70% have beaten on EPS, 81% on sales and 60% on both. This is better than last quarter (53%/95%/53%) and the historical average since 2012 (69%/64%/49%). The median EPS beat so far has been 7.7%. 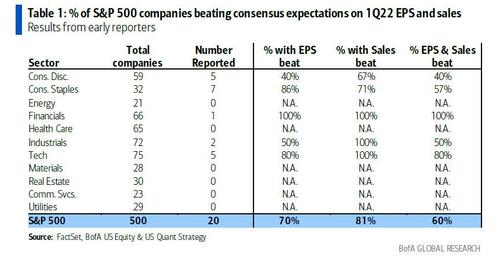 But it’s also that case that early reporters have been badly off. Meanwhile, a major red flag is that corporate guidance is weakening, and the resulting information vacuum means a higher ERP. Quote BofA: “Our 1-mo. guidance ratio (# of above- vs. below-consensus guidance) fell sharply to 0.3x in March, the lowest since Feb 2020 (the 3-mo. measure also fell to 0.7x, the lowest since June 2020). Real Estate and Health Care (both 1.3x) were the only sectors with over 1.0x 3-mo. ratio (Energy had no EPS guidance). Similarly, our Earnings Revision Ratio also sharply fell to 0.9x in March.”

Moreover, the banks see signs of information vacuum amid rising uncertainty: guidance instances thinned in March to the lowest of any March month since 2001 as companies decided to simply keep quiet as they had nothing good to say. Oddly, estimate dispersion narrowed, indicating increased analyst certainty, but guidance trends and risks of widening dispersion after the 1Q “reset” could raise the equity risk premium.

Another notable observation: some sectors will do far better than others, and Energy will blow everyone else out of the water. According to BofA, Energy ranks best, Comm. Svcs. & Cons. Disc. worst Historically, sectors with strong EPS/sales revisions and guidance have been more likely to have a greater amount of earnings beats than misses in the subsequent earnings season. Also, given that positive surprises tend to persist, sectors with a higher ratio of positive to negative surprises in the prior quarter may be more likely to enjoy similar results in the current quarter. Based on these measures, for this earnings season Energy, Tech and Real Estate screen as most likely to surprise to the upside, while Communication Services and Consumer Discretionary screen weakest.

While it is unclear if earnings season will provide some modest relief for the volatile stock market, one thing is certain: for short-term traders, stock differentiation is heightened during earnings season, particularly the busiest reporting days, allowing (good) stock pickers to thrive. Below BofA shows the average dispersion (standard deviation) of daily stock returns based on the number of companies reporting by day since 2009. This reveals that dispersion is consistently higher for busier reporting days. This quarter, the busiest days fall the last week of April.

One final point, the soaring USD is starting to take a bite profits: following a 4.5% rise in USDEUR YTD, a stronger USD is starting to impact earnings. BofA estimates a 1.2ppt headwind on YoY sales growth from FX translation. Meanwhile, analysts expect 1Q sales decelerating further to +10.6% YoY vs. +14.7% YoY last quarter. Similar to last quarter, Energy is expected to lead growth (+45%), while Utilities (-0.9% and Financials (-0.3%) forecast to see lower sales. Excluding FX/oil impacts, constant-currency sales growth for the S&P 500 ex. Fins. & Energy is expected to be +9.5% YoY vs. +11.2% last quarter. More challenging will be what the recent surge in the USD means for Q2 results and also for guidance. Don’t expect companies to dwell too long on this topic as there is little upside to be found here…