The Fentanyl Crisis: Brought To You By Drug Prohibition

The Fentanyl Crisis: Brought To You By Drug Prohibition

As drug overdoses continue rising in the United States, one drug has emerged as the most notorious killer of our day: fentanyl. Unfortunately, those clamoring loudest about fentanyl’s death toll support policies that actually bolster its position in the illicit drug trade.

First approved for U.S. medical use in 1968, fentanyl is a synthetic opioid used to counter severe pain after surgery, and chronic severe pain. Though similar to morphine or heroin, it’s 50 to 100 times more potent.

Most of the fentanyl circulating on the streets doesn’t come from pharmaceutical companies. According to the DEA, black market fentanyl is “primarily manufactured in foreign clandestine labs and smuggled into the United States through Mexico.” China is a major source of its chemical ingredients and some finished product too.

As with other black-market knock-offs, the inconsistency of illicit fentanyl makes it more dangerous. Worse, it’s often laced into other drugs, including cocaine, heroin, marijuana and counterfeit pills disguised as pharmaceutical-grade Oxycontin, Xanax, and Adderall.

Though its effect varies by a user’s size and tolerance, ingesting just 2 milligrams can be fatal. That fact lends itself to jolting descriptions of fentanyl’s lethality by public officials, pundits and click-chasing media. A recent Fox News headline is just one of countless examples of fentanyl sensationalism: “Colorado State Patrol seizes enough fentanyl to kill 25 million people.”

When you consider that, in 2021, there were 108,000 overdose deaths from all drugs in the entire country, you can see where headlines and rhetoric centered on such calculations aren’t meant to enlighten an audience so much as to shock it. 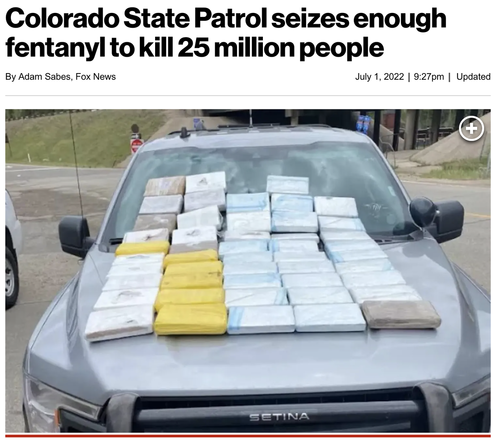 American discourse about fentanyl is further warped by politicians and sloppy journalists who promulgate urban legends about cops and bystanders dying from merely touching fentanyl powder.

For example, House Minority Leader Kevin McCarthy recently asked Fox’s Sean Hannity if he’d heard about “a young woman who picked up a dollar bill sitting on the floor of a McDonald’s and fell down” because fentanyl was supposedly on it. “That’s how deadly it is.”

Like many similar tales, this one proved false. Fentanyl can be plenty deadly, but not that way.

Setting immigration policy aside and keeping our focus here on fentanyl, we now come to an essential truth that’s little-known either inside or outside of government:

The more you intensify drug interdiction along the border and elsewhere, the more you elevate fentanyl as the drug trade’s import of choice.

To appreciate the dynamic, let’s look back to America’s experiment with alcohol prohibition, with some help from the Cato Institute’s Trevor Burrus:

“Smugglers and bootleggers preferred high‐​potency spirits because they are easier to transport illicitly. Consequently, distilled alcohol and fortified wines became almost 90% of alcohol consumption after Prohibition, compared to 40% before…During alcohol Prohibition, speakeasies were essentially bars that only served Everclear.”

Now think about it from a drug trafficker’s perspective: Would you rather try smuggling 10 pounds of fentanyl, a thousand pounds of heroin or a truckload of pot?

That crisis is also driven by regulatory crackdowns on prescription opiates, which drive both addicts and those with legitimate needs away from pills of uniform quality and dosage and into the dicey, deadly realm of black market alternatives.

Consider this: In 2011, oxycodone topped the overdose death charts, with 5,587 fatalities. That led the government to impose new policies to frighten doctors away from prescribing opioids. By 2016, fentanyl was the new top killer, and it was associated with 18,335 deaths — more than triple the 2011 oxycodone tally.

You can build a coast-to-coast border wall that extends 200 feet above and below ground, and fentanyl will keep flowing into the country via other avenues — as it does already to lesser degrees.

The more difficult you make it to move fentanyl, the higher its price goes, inviting new entrants into the black market, and incentivizing the adoption of innovative and more elaborate ways of meeting America’s perpetual demand for intoxicants. At some point, it could even incentivize cartels to move production inside U.S. borders.

Those wouldn’t be the only outcomes. If drug warriors and border hawks somehow manage to make it far more difficult to move fentanyl, fentanyl will likely be dethroned by something worse.

Prohibition also invites many hideous forms of authoritarian excess, to include frequently-fruitless dismantling of vehicles, body cavity searches, and even coerced colonoscopies that come up empty.

In short, drug prohibition’s harmful results far exceed its beneficial ones. Meanwhile, drugs are as readily obtainable today as they were when Richard Nixon declared a federal war on drugs a half-century ago.

So what are we to do? Though it’s contrary to intuition and a shock to many people’s sensibilities, the proper response to the fentanyl crisis and other collateral damage of the war on drugs is clear: across-the-board drug legalization.

That isn’t an endorsement of drug abuse any more than legalized alcohol endorses alcohol abuse — which, it should be noted, has a death toll that rivals if not exceeds that of drug abuse.

Rather, full legalization of both production and possession is the logical position for those who understand that policies must be judged not by their intentions, but by their results.