It’s a curious coincidence that the day the name of Jeff Epstein’s close buddy, Larry Summers, was being thrown around as the next Treasury secretary, Clinton’s Treasury Secretary and Obama’s top economist issued the loudest warning yet that something is about to break, and not just in the UK but in the US.

As a reminder, earlier today Rabo’s Michael Every said this:

There were rumours, long heard on the Street, that Janet Yellen is out as Treasury Secretary after the mid-term elections. Who, without a key role at present, has been all over the press talking about the need for higher rates? Larry Summers. So who is next in line, perhaps? What a shock for markets that would be. From someone who once ran the Fed to someone who wanted to run the Fed. How apt given the increased link-up between fiscal and monetary policy.

Well speak of the devils… 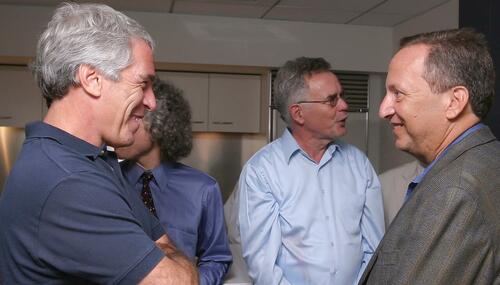 … because, according to Bloomberg, in Larry’s latest bid to frontrun the coming crash and then say “I told you so” even though it was his policies in the late 1990s that enabled the current crash possible, the former (and future) Treasury Secretary likened the risks facing the global economy to the pre-crisis summer of 2007, with the UK’s current troubles just one example of potential breakdowns.

“We’re living through a period of elevated risk,” Summers told Bloomberg Television’s “Wall Street Week” with David Westin. “In the same way that people became anxious in August of 2007, I think this is a moment when there should be increased anxiety.”

The summer of 2007 was when markets briefly plunged after the entire quant space went haywire for a few days, prompting substantial losses across all asset classes; the move was prompted by the first signs of strains over a collapsing US housing market, eventually morphing one year later into the worst financial crisis since the Great Depression.

Besides the UK, “I don’t there’s any sign that I see — yet — of other markets being disorderly,” said Summers, a Havard University professor and paid contributor to Bloomberg Television. “But we know that when you have extreme volatility, that’s when these situations are more likely to arise.”

According to Summer, some of the dynamics behind the current fragility are substantial leverage, uncertainty about the economic policy outlook, unease about high rates of underlying inflation, volatility in commodities and geopolitical tensions tied to Russia’s Ukraine invasion and to China.

One particular area to monitor is the strains inherent in Japan’s policies right now, the former Treasury chief said, echoing what we said back in March (see “Yen At Risk Of “Explosive” Downward Spiral With Kuroda Trapped… And Why China May Soon Devalue“)

Pointing out what our readers have known for much of the past year, Summers said that – like the BOE – on one hand, Japan has been withdrawing liquidity from its markets, through its purchases of yen last week in an effort to support the exchange rate. But on the other hand, it’s injecting liquidity through the Bank of Japan’s continuing monetary easing. It’s an “extraordinary thing” Summers said adding that “It will be interesting to see how that plays out.” Japanese investors have “vast holdings” of fixed-income securities around the world, and that will be something to keep an eye on, he said.

Turning to the UK, Summers said that “we’re in very complex and uncharted territory,” warning that while the Bank of England’s intervention in the gilt market stabilized things for a time, that won’t last, noting that the BOE’S plan is for operations to continue until Oct. 14. The key problem – according to the man who single-handedly redefined unsustainable economic policy – is that markets don’t believe UK macroeconomic policy is sustainable.

Summers, who served at the Treasury during the Clinton administration and was director of the White House National Economic Council under President Barack Obama, said that given the current risks, “this is certainly not a time when very many firefighters should be taking vacations.”

“When a country as major as Britain is going through something like this, that is something that can have consequences that go beyond,” Summers noted. He likened financial troubles to tremors before an earthquake. While sometimes the tremors pass, that’s not always the case — as was true in 2007, he said.