The Sisyphean Exercise Of Afghanistan In One Shocking Map

The Sisyphean Exercise Of Afghanistan In One Shocking Map

President Trump announced Monday that his controversial Afghan peace talks and the entire process is “dead” — explaining the Taliban had continued its terror offensive targeting US personnel and allies amid talks, specifically an American soldier in a car bombing last week.

He further described that Taliban officials had been spreading the word that they’d made a “big mistake” in crossing him.

“They thought they had to kill people in order to put themselves in a little better negotiating position,” Trump said.

Soon after Trump first announced Saturday that direct peace talks were effectively ended, also acknowledging Taliban leaders were set to “secretly meet with me at Camp David on Sunday,” the administration immediately starting painting a rosy picture of how things are going in America’s longest war – now approaching two decades.

Pompeo on Meet The Press: “You should know, in the last 10 days we’ve killed over 1,000 Taliban. And while this is not a war of attrition, I want the American people to know that President Trump is taking it to the Taliban.” pic.twitter.com/dXxQwzrYkD

Secretary of State Mike Pompeo promptly claimed the US had killed over 1,000 Taliban in just the last 10 days.

But what’s the end game here?

The map below shows the shocking reality that a little less than half of the entire country’s population is actually firmly under the US-backed national government’s control (just 48%) after over eighteen years of war and countless American sacrifice in blood and treasure.

And a majority the territory across Afghanistan is still considered “contested” (in red below) according to an interactive map maintained by FDD’s Long War Journal (see full-sized interactive map here). 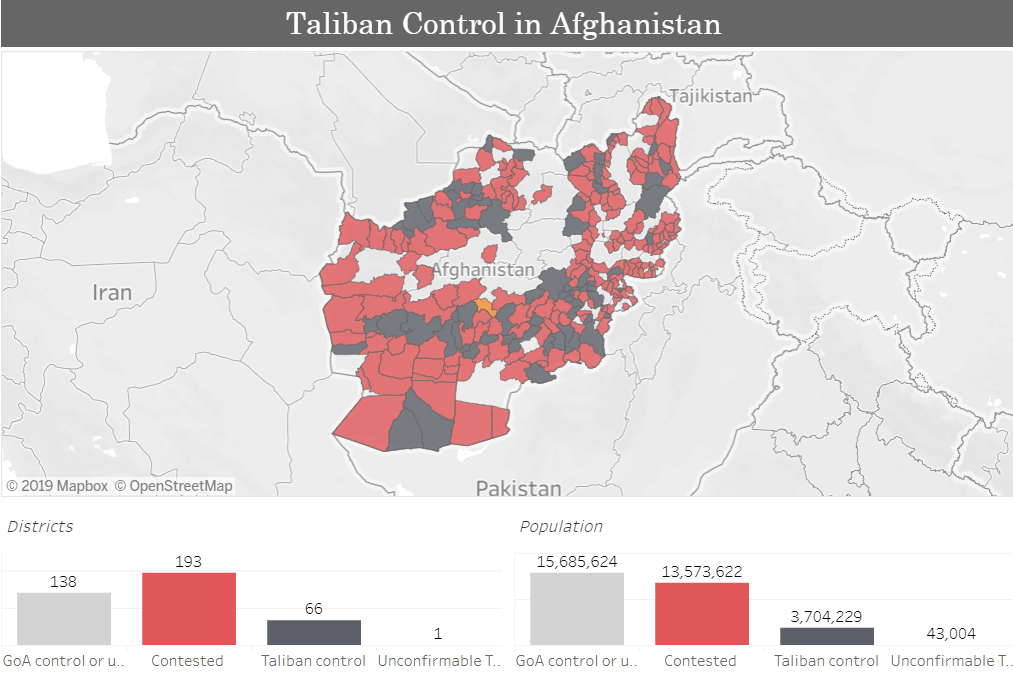 This led one former Green Beret and current journalist, Jack Murphy, to say it’s past time to just skip right to the end game: get out and get out now.

He said, “instead of all of this navel gazing, teeth gnashing, and handwringing, let’s just skip right to the end game?”

This is going to sound crazy, but bear with me. We all know the US is going to pull out of Afghanistan and the country will collapse into chaos like Vietnam. So dig this, instead of all of this navel gazing, teeth gnashing, and handwringing, let’s just skip right to the end game?

Trump’s instincts to withdraw from the Afghan quagmire are correct (as they were on Syria as well before an avalanche of deep state push back).

Indeed let’s just skip right to the end game, assuming the end result will be the same no matter what. At least no more Americans would have to die, and no more tax dollars drained, on what in the end is a futile Sisyphean exercise.

The gods had condemned Sisyphus to ceaselessly rolling a rock to the top of a mountain, whence the stone would fall back of its own weight. They had thought with some reason that there is no more dreadful punishment than futile and hopeless labor.

–Albert Camus, THE MYTH OF SISYPHUS

Mapping All The Major Bitcoin Forks