Syria’s US-backed Kurdish militias are warning that over 10,000 jihadists, among these thousands of ISIS terrorists, could go free as a result Turkey’s ‘imminent’ invasion of northeast Syria. The numbers of ISIS terrorists unleashed in the wake of the Turkish military incursion could be the biggest since the height of the Islamic State caliphate’s existence, per Syrian Kurdish official statements reported by Fox News:

Aside from the existential threat to the Kurdish fighters posed by Turkey, Syrian Kurdish forces are also warning that ISIS sleeper cells are actively plotting to free about 12,000 militants currently detained by the Kurds and may take advantage of the Turkey-triggered turmoil to aid their plans.

Those in custody include about 2,500 foreign fighters from Europe and elsewhere whose native countries have been reluctant to take them back — and about 10,000 other captured fighters from Syria and Iraq.

One major but relatively underreported fact is that over at least the past two years makeshift Kurdish/SDF prisons have held many of the region’s most dangerous terrorists with the Pentagon’s help. Kurdish forces have blamed Turkey for unleashing ISIS jihadists on northern Syria in the first place.

Despite a US statement late Sunday saying that Turkey will now take custody of the thousands of militants after Washington announced it “will not support or be involved in the [Turkish] operation” and “will no longer be in the immediate area,” a rapid US withdrawal from border bases such as at Tel Abyad and Ras al Ain in northeast Syria (which has already happened at both locations), leaves the fate of ISIS prisoners in the area in question.

“Turkey, Europe, Syria, Iran, Iraq, Russia and the Kurds will now have to figure the situation out,” Trump tweeted Monday morning in a series of statements defending his decision to move out of Turkey’s way.

It was clear that the ISIS prisoner question is on the president’s mind, however, given the following statement as part of the series of tweets:

They [Turkey] must, with Europe and others, watch over the captured ISIS fighters and families. The U.S. has done far more than anyone could have ever expected, including the capture of 100% of the ISIS Caliphate. It is time now for others in the region, some of great wealth, to protect their own territory.

But the Kurdish-led Syrian Democratic Forces shot back in a Monday statement: “The American forces did not abide by their commitments and withdrew their forces along the border with Turkey.”

Mustafa Bali, the SDF spokesman, highlighted the potential for mass ISIS jail breaks in the wake of the US withdrawal: “People here are owed an explanation regarding the security mechanism deal and destruction of fortifications,” he said.

There’s also the question of al-Hol refugee camp in northeast Syria, which media reports throughout the summer described as a festering hotbed out of which a renewed ISIS underground insurgency is ready to explode, given it is home to over 70,000 people, mostly families of known ISIS fighters. 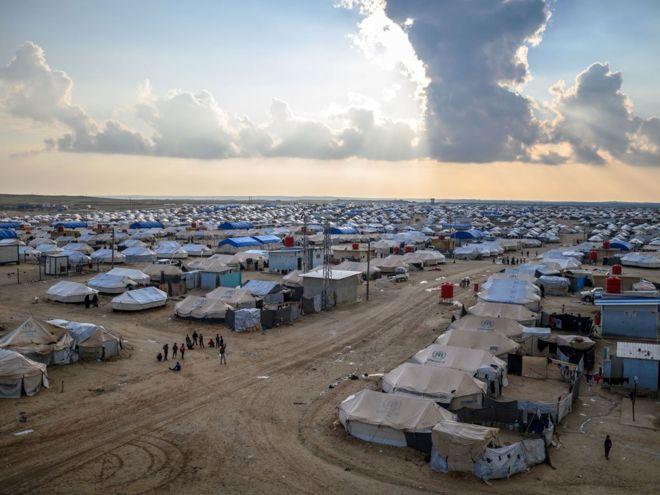 Al Hol camp via BBC: “Al-Hol is a nightmare, a camp that has grown from 11,000 people, to more than 70,000. It is swollen with the dark aftermath of the collapsed pseudo-caliphate. It is ready to burst.“

As The Independent reported last week, the timing of this week’s chaotic developments couldn’t be worse:

Camp authorities have warned that they may not be able to control the roughly 70,000 inhabitants, most of whom were detained as they fled the last remnants of the Isis caliphate earlier this year.

“This is an Isis city – 70,000 people cannot be controlled. We have only enough guards to protect from outside attack,” the SDF’s Mustafa Bali said, noting that his group’s administration of the prison camp won’t last long if Turkey invades.