A paralyzed man has spent nearly two years testing a mind-controlled robotic suit. Now French researchers, who are responsible for building the exoskeleton, have published a new report documenting the proof-of-concept demonstration.

Researchers at the University of Grenoble, located in southeastern France, published the latest results of the suit and a video last week.

The suit was operated by a 30-year-old man, only identified as Thibault. He was able to control the suit with his brain, moving the suit forward while he was strapped to the exterior of it.

Thibault told BBC that his latest robotic walk was like being “the first man on the moon.” The tests were held in a heavily secured lab at Clinatec and the University of Grenoble.

The robotic suit is controlled by two implants that were surgically placed in Thibault’s head. The implants are wireless, able to beam brain activity to a nearby computer where artificial intelligence converts the signals into instructions for the exoskeleton. 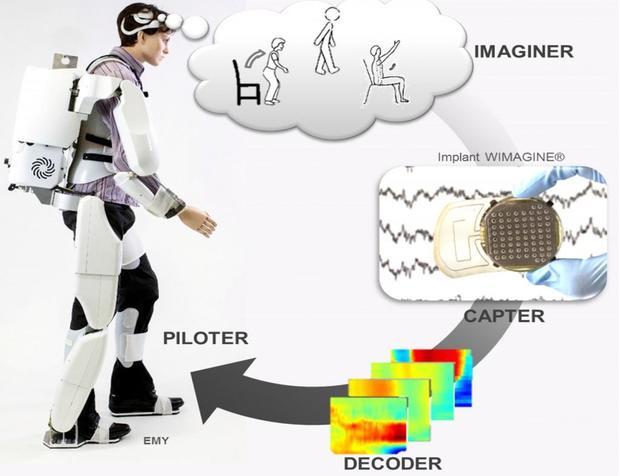 Thibault has been paralyzed for four years. He’s been training with the researchers for two years, at several labs to control the 140-pound exoskeleton suit.

Researchers first trained an algorithm to interpret brain signals and convert them into commands for the suit. Thibault was able to play a game similar to Pong, while the algorithm learned his brain activity and turned the signals into commands to control a digital paddle where he hit a ball. The training started as early as 1H17 and went on for at least two years.

Once the algorithm learned Thibault’s brain commands, researchers strapped him to mechanical exoskeleton with 14 moveable joints. He first used the arms of the machine to tap levers, and it was only until recently, he was able to walk the machine forward.

As shown in the video below, Thibault’s exoskeleton suit was suspended with cables from the ceiling during the test.

“Our findings could move us a step closer to helping tetraplegic patients to drive computers using brain signals alone, perhaps starting with driving wheelchairs using brain activity instead of joysticks and progressing to developing an exoskeleton for increased mobility,” Professor Stephan Chabardes, a neurosurgeon from the CHU of Grenoble-Alpes, said.

And it’s almost guaranteed that when millennials start retiring in 2045-2055, mind-controlled robotic suits will be fully matured and have already entered series production decades before. Can you imagine, elderly millennials in exoskeleton suits walking to the corner store for some avocado toast?