Over the three-plus years that have passed since the Brexit referendum, the fraught process of leaving the European Union has stretched the patience of many voters to the breaking point, while others have been driven to the point of near-hysteria by incessant warnings about the chaotic fallout should the UK leave the bloc without a withdrawal agreement in place.

So, perhaps it’s not all that surprising when researchers and journalists look at the aggregate poll results over the years to see support for ‘remain’ climb while support for ‘leave’ faltered as negotiations became increasingly fraught. In all honesty, the fact that ‘leave’ hasn’t seen a larger drop in support should be encouraging for supporters.

Whatever the case may be, with support for a second referendum on the rise, the Evening Standard has performed an analysis of more than 200 public opinion polls that have been conducted since the referendum. And it found that support for Leave has slumped while support for Remain has climbed.

The study shows that at the start of 2017, a majority of survey respondents favored quitting the EU, 51% to 49% (though their lead was down slightly compared with the results of the referendum. But during the first six months of 2018, remain was ahead 52% to 48%. By the first six months of this year, after two years of incessant and bombastic coverage of Parliament’s misadventures by the British press, ‘Remain’ led 54% to 46%.

In the most recent batch of polls, ‘Leave’ had bounced back, and was only trailing ‘Remain’ by six percentage points, or 53% to 47%.

These findings were announced together with ‘the People’s Vote”s latest campaign for a second Brexit referendum, entitled “Together for the Final Say.”

Hundreds of thousands of marchers are expected to join the demonstration, which is set to take place on the same day that the Commons is expected to sit for an emergency Saturday session to vote on its preferred path forward for Brexit (if Parliament doesn’t vote in favor of a ‘no-deal’ Brexit, then legally, PM Boris Johnson may be compelled to request another extension from Europe, kicking the Brexit can until early next year).

If Parliament succeeds in blocking ‘no deal’ on Oct. 31, MPs will have successfully delayed Brexit by nearly a year (the original ‘Article 50’ date was March 31, 2019). According to political analysts who have been closely following the situation, this would virtually guarantee a snap election (since Parliament has proven time and time again that it can’t come to an agreement on the withdrawal agreement). But when it comes to an actual vote, polling has been much less clear. According to Goldman Sachs, there’s a decent chance that a snap vote could return Johnson to power with a stronger majority. 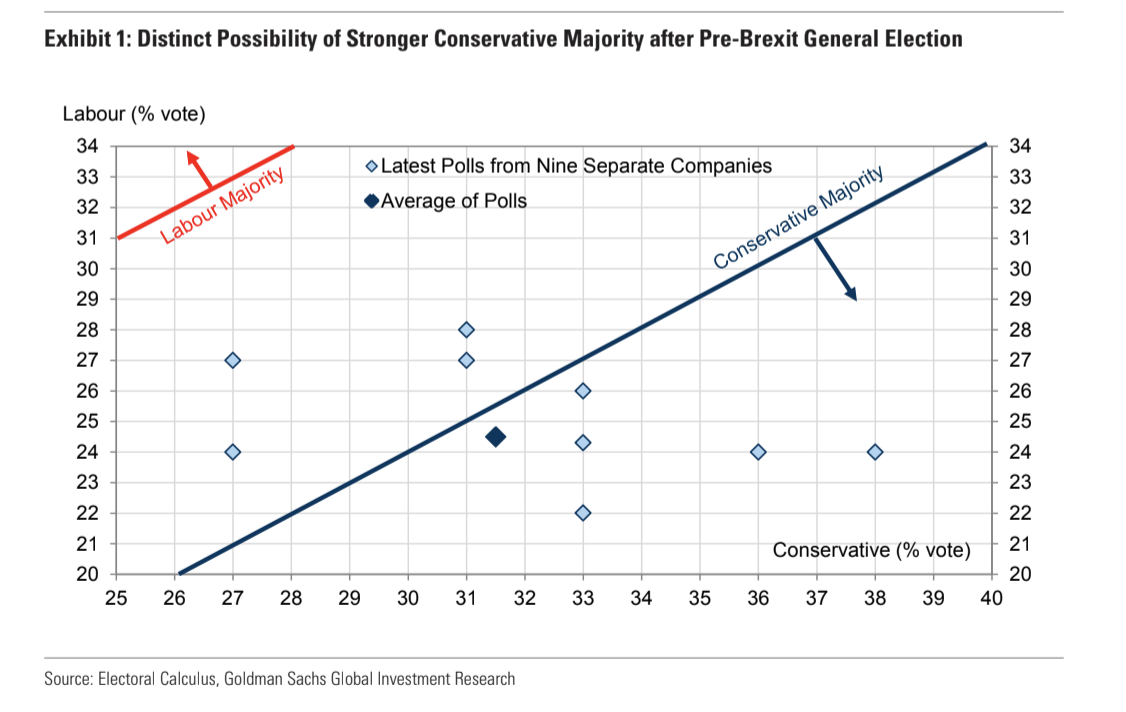 According to the FT, which published a probable timeline for the as-yet-unconfirmed vote on Wednesday, Oct. 23 is the soonest possible date that the government could call for a Commons vote on the prospects for an election, with Britons likely heading to the polls on Dec. 5.

But with UK labor productivity falling, jobs leaving and growth slowing – all of which have been successfully blamed on Brexit, despite evidence of a Continent-spanning slowdown – Johnson could have his work cut out for him.