A portion of President Trump’s $11 billion border wall with Mexico, or about $20 million per mile, blew over Wednesday from gusty winds, came crashing down on the Mexican side, reported CNN.

Agent Carlos Pitones of the Customs and Border Patrol (CBP) sector in El Centro, California, told CNN that 130 feet stretch of the wall in Calexico, California, fell on Wednesday after high winds were present in the area.

Pitones said the cause of the wall crashing down was due to freshly poured concrete not yet cured.

The National Weather Service (NWS) said gusts in Calexico were up to 40 mph Wednesday, which the video below shows the wall leaning against trees adjacent to a street in Mexicali, Mexico.

“We are grateful there was no property damage or injuries,” said Pitones.

CBP told USA Today in a statement that no property damage or injuries were seen during “this uncommon event.”

“The border wall system is imperative to securing the border and is what border patrol agents have asked for and need to maintain operational control of the southern border,” CBP said.

The agency said construction of the wall in Calexico would continue.

President Trump’s wall is expected to be completed in three phases.

Trump has so far allocated $11 billion to construct 576 miles of a new “border wall system.”

“You’re going to have a wall like no other. It’s going to be a powerful, terrific wall,” President Trump said at a rally in Milwaukee last week. “A very big and very powerful border wall is going up at a record speed, and we are fully financed now, isn’t that nice?”

By mid-January, the government had constructed 101 miles of the border wall.

Mexico has recently reported a 56% reduction in the number of undocumented migrants crossing the country, a sign that President Trump’s tough stance on Mexican President Andrés Manuel López Obrador (AMLO) has been working.

However, there’s a huge problem: the wall can’t prevent drug-smuggling tunnels that are all too common between California and Mexico.

The latest drug tunnel the CBP has discovered, measured a quarter-mile into the U.S. to San Diego and a half-mile into Mexico, to Tijuana. 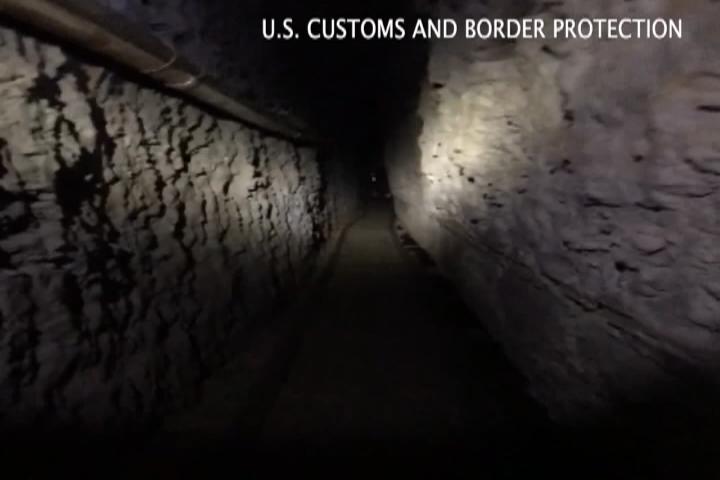 CBP officials said the tunnel had a ventilation system, electricity, and even elevators.

Wall or no wall, it’s probably a good idea to have one, so if a zombie apocalypse unfolds, people with coronavirus in Mexico can’t easily cross the U.S. border.